Published in Feb. 2020 (Issue 117) | 1016 words
© 2018 by Victor LaValle. Originally published in Particulates, edited by Nalo Hopkinson. Reprinted by permission of the author.

“Our data suggests you’ll feel a great deal of pain in them after you transmit.”

She shifted where she stood and I sensed she was annoyed with me. It’s funny how much you can understand from body language. I couldn’t really tell from looking at her face, since the room was almost entirely dark.

“All of this is covered in the manual. Didn’t you read it?”

I didn’t answer her because the answer was obvious. Instead I started taking off my clothes. She saw what I was doing and said, “Well, I can see you read the first page at least.”

She left to get me a containment suit. In the movies, a woman like her—Transmission Liaison—would be wearing eight-inch heels and a tight dress, and I’d be listening to her click-clack across the hard floor of the chamber. But instead I heard nearly nothing; this Transmission Liaison wore flats.

“Does everyone read the whole manual?” I asked as I took off my pants. I felt stupid, unprepared.

“They’re supposed to,” she called out from farther away than I’d expected. Because of the near-dark, I couldn’t get a sense of the limits in this place. I might as well have been floating in outer space.

“They’re supposed to,” she repeated, right up close to me again, “but I’ve been the Transition Liaison for almost 3,000 people and I’ve only met three people who read the manual all the way through.”

With that she tore open the sealed packet that held my containment suit and, I don’t know why, I leaned forward to inhale the smell.

“It’s not a bouquet of flowers,” she said, but it wasn’t mean. Maybe lots of other people had done that before.

Putting on the suit felt like pulling on a sock that’s a bit too small.

“You listed yourself as a medium,” she said.

“I’ll fit,” I told her, but that was never going to work. She gave a soft laugh and finally, after giving up, I laughed too.

“I’m nervous,” I said. Then I kicked off the containment suit like a kid struggling out of his pajamas.

She crouched and when I saw the contours of her face, I realized that my eyes had adjusted to the dark.

“It’s normal,” she whispered. “But this is the hardest part. I promise you.”

She placed a hand on my shoulder and guided me back to the lockers where the containment suits were kept.

“Has anyone ever come back?” I asked.

“Why would they? The point is to leave.”

“I know, I know. But if no one ever comes back, how do you know it’s any better over there?”

She slipped the right-sized suit from a stack. I wondered how she could see something as precise as the sizes. Maybe she never left this room? I tore open the bag myself this time. I didn’t sniff it.

“We do receive data,” she said. “We’re in constant communication. That’s also in the manual, by the way.”

Now the suit slipped on as easily as a pleasant lie.

“And I only get the helmet when I step into the Ark?”

“That’s right.” She patted me on the shoulder.

She reached into her jacket pocket and pulled out a tiny device no larger than her thumb. She pressed something—a button, I assume—and the sound of droplets falling to the floor played throughout the chamber. She didn’t wait for me to ask, no doubt that was covered in the manual too.

“Our data suggests the climate of the planet, or at least the part where you’ll arrive, is in a perpetual mist. Early Travelers had trouble acclimating to the new environment, so we began doing this—it helps the mind to prepare.”

She walked away from me, toward the middle of the room, but held her hand up when I tried to follow.

“Transmitting doesn’t take any ‘time’ as we’d understand it, but it will seem to take longer to you. This portion of the trip will lack light, that’s why the chamber is kept so dark. So you’ll adjust.”

I went back to where I’d left my clothes, picking them up and cradling them in my arms. I had to go, but I didn’t want to leave a mess.

“They’re saying the federal government is going to follow through on their threat,” I said. “They’ll recolonize the sanctuary cities, they’ll find us.”

“Yes, people are saying that, which is why we’d better not waste any more time.”

She held up the small device and pressed the button a second time and then there it was, the Ark of Light.

I hadn’t realized the light would be green, but as I soon as I saw it I knew it was exactly right. Something soothing about it, though of course the Ark ran the length of the room. If it hadn’t been a device to transport human beings off the planet, I would’ve called it a work of art.

A low, regular hum echoed in the room, or was it playing inside my rib cage, within the ventricles of my heart?

“When will you go through?” I asked.

“When everyone is safe.”

I stuttered some kind of argument but she grabbed my right hand and held it. “When everyone is safe.”

In the light of the Ark, I cried, quietly.

“I hope that’s soon,” I whispered.

She gestured for me to come closer. I’d have to step into the light at the far edge. Then I’d be thrown forward, de-atomized, or some other scientific concept I didn’t truly understand, shot forward on the beams, out of our solar system, farther than humanity had ever gone before. Who cared if we were still welcome in this country? Let them keep it, we never wanted to inherit a failing empire. We had bigger dreams, and now we had the rest of the universe in which to dream them. 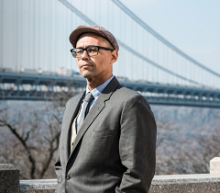 Victor LaValle is the author of seven works of fiction and one comic book. His work has been awarded the World Fantasy Award, British World Fantasy Award, the Bram Stoker Award and Shirley Jackson Award, among others. He has been a finalist for the Nebula and Hugo Awards as well. His new novel, Lone Women, will be published in 2021. He teaches writing at Columbia University and lives in New York City with his wife and kids.