The doctor congratulates them. The baby is human, and healthy. Richard is on her instantly, bruising her shoulders with his joy, planting kisses on her forehead and neck and face. His—their—fortune is the five-month-old smudge in the grain of the sonogram, soft-boned and quivering and reassuringly feather-free. It’s been six long years: Years of cajoling, years of trying, years of navigating the risks. Now they are here.

Jiawen is quiet and the doctor notices. “Is something wrong?”

“I’m tired.” She tells the doctor about the nausea and the lethargy, from the moment she pries herself out of bed in the morning till the moment she returns to it. Her body is swelling like a spoiled can; in the mirror every morning she checks how much further her mottled skin has stretched under the buildup.

The doctor assures her she’s normal, everyone feels that way. It’s a good sign, in fact, the morning sickness. “I’ll prescribe something for you.”

Conventional wisdom holds that the first one-and-a-half trimesters are the most dangerous for pseudocorvid infection. In the waiting room Richard squeezes her shoulders again. “Twenty-four weeks! Out of the danger zone.”

There are two others in the hospital’s new prenatal wing, an old woman accompanying a girl far too young to be sitting here with that shape to her stomach. The lines of their faces betray familial relation; both are dressed in black, as if for a funeral. The small blonde receptionist flicks through her phone.

The walls are covered with baby charts, handwashing advisories, diet suggestions for expectant mothers. At the far end a crisp, bright poster reads, in bold and blood red: LIFE CYCLE OF THE PSEUDOCORVID PARASITE. Underneath, illustrated in a circle, the four stages:

Jiawen stares at the stylised silhouette of the pregnant woman in the bottom half until she feels that tight, sick feeling rising up her throat again.

A scream from the consultation suite: a woman, high and desperate and pleading.

Richard is on his feet, moving, intense: “What’s happening?”

A nurse runs from somewhere and flings the consultation door open. A wall of noise hits them: the woman’s wailing, a man’s voice shouting, the doctor’s authoritative boom. “Someone—hold her!”

Richard leaves Jiawen, shouting, “I’m a paramedic, I can help,” and he slips through the door as it shuts, muffling the cries within.

A shaken muteness follows. Then the old woman declares, her bird-bright eyes fixed on Jiawen: “It’s their own fault. If they wanted the baby, their bodies would know how to fight off that alien shit.”

Her granddaughter looks down at her curled, shaking fingers and says nothing.

The screaming behind the door continues unabated. Jiawen imagines the poor woman lashed to a gurney, the doctor sawing the scalpel across the inflated belly, the blackbirds pouring out like a nursery rhyme. She imagines Richard’s face, stern as a pastor’s, as he watches the proceedings, wings beating around his face.

The waiting room is suddenly too warm: Jiawen’s ankles grow heavy and her head feels like it may split. In desperation, she stands and pushes through the barrier of the entrance doors into the world outside.

Last week’s snow lingers soiled and slippery on the ground. A man with a shotgun patrols the hospital carpark, the flak jacket over his coat declaring him a member of the Corvid Extermination Volunteer Corps. Jiawen stays in the protective overhang of the hospital porch, filling her lungs with winter air and trying to breathe her nausea out with it. The sense that something inside her is dead and rotting will not go away.

Jiawen remembers the way her mother’s body ballooned with her unborn brother, and how her mother seemed to diminish as her belly grew bigger. “Now you can have children,” she had said at Jiawen’s wedding. “Grandchildren to sweep our graves and burn us offerings.” Because who else would do it, in this country of white people?

Between the hospital porch and the carpark stands a lamppost. A blackbird lands on its flat top in a flurry of wings and talons, the latter clacking as it struggles for balance.

Jiawen leaves the porch to have a look, the way you are drawn to something that might be dead out in a field. The bird’s unblinking eyes fix on her, like it’s x-raying her, seeing right through her skin.

It’s beautiful, somehow hi-def, from the iridescence of its wings to the tiny feathers around its beak and eyes. Corvids are almost extinct, hunted by vigilantes who saw every feathered thing as an alien threat, come to infect their women with their spores.

But she thinks this one can’t possibly be an alien—no amount of mimicry from a species that comes from the cold of space, carried on the back of meteorites, could achieve this sort of verisimilitude. This is a real bird, a survivor, who has somehow avoided the bullets of angry men aiming everything they can at every creature in the sky. A miracle. Jiawen feels a smile build.

“Lady, get away from there!” The shout rings out. She looks: The man in the flak jacket is charging towards the lamppost, both barrels leveled.

He ignores her and marches past, gun ready. She grabs his broad shoulders, smelling in an instant the sweaty, animal reek of him. “Please—”

He pushes her and she, ankles and midsection clumsy, falls. With a shriek the blackbird takes to the sky, and Jiawen is hit by both relief and abandonment.

The man spits a curse and raises the shotgun, but the bird is twisting away overhead, no longer an easy target.

Both barrels swing towards Jiawen on the ground. “You! You warned it!”

Fear floods her. She’s drowning, chest seizing up. The man’s face is red and round and his gun’s hammer is cocked. It’s pointed at her stomach, which pulses as if the baby inside were trying to run.

Jiawen raises her hands, the tarmac biting into her elbows through her coat. “Please! Don’t shoot.”

“Stupid Chinese bitch. I bet you’re one of them. Aren’t you?” The shotgun’s muzzle jerks as he gestures. “You’ve got a whole load of them in there!”

Jiawen blurts: “No! Please! My baby.” Richard will be so disappointed. It spills out of her as she loses her grip on reasoned thought. All she can feel is the weight of all those nights he spent painting pretty pictures for her. The longing in his voice. His utter and unmatched joy when the test kit says “yes.”

“Hey! Hey!” Commotion in the form of the receptionist, who’s come running out without a coat, her breath cloudy, her arms pinwheeling. “Put the gun down!”

She comes between them, a hero: Tiny, but with feet like thunder. Like a spooked cat the man hisses and backs away. Jiawen tries to get to her feet.

“You all deserve whatever you get,” the man shouts as he slinks off, a parting shot. “Crazy bitches. I hope your stomach explodes!”

“Jesus,” breathes the receptionist. She tucks a hand under Jiawen’s elbow to help her up. “You all right?”

Jiawen nods vaguely. Her nose is crusted with snot she didn’t know was running. She wants to throw up.

“Man, I hate having those guys around, so close to the clinic. Come on,” she says, unusually gentle, “let’s get back inside.”

As the receptionist hands her the first steaming cup of tea, Richard bursts triumphantly from the consultation room, his shirt disheveled, something about the way the sleeves are rolled up suggesting spots of damp. “They got the bastards out,” he announces to no one in particular. “Couldn’t save the baby, but—”

He catches sight of Jiawen’s crumpled, red-rimmed face and forgets it all. “Baby, what’s wrong? What happened?”

She shakes her head and manages, “Nothing.” Glances fearfully at the receptionist, at the old woman and her granddaughter and their pinched expressions. None of them betray her.

The receptionist makes her a second cup of tea, and then slips her a bag of sweets before they leave. “Before it gets too dark,” Richard says. Jiawen is almost calm now, and as she takes her swollen belly outside, past the spot where her body had lain on the tarmac, she stops. Richard will be so disappointed. And her mother, too, probably.

Jiawen puts her hands over her midsection and looks to the darkening sky. Taking another deep breath, she imagines with near-ferocity that her lungs are full of microscopic feathers, and the dull thuds in her belly are the beating of wings. 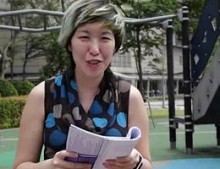 JY Yang is a lapsed scientist, a former journalist, and a short story writer. She lives in Singapore, in a bubble populated by her imagination and an indeterminate number of succulent plants named Lars. A graduate of the 2013 class of Clarion West, her fiction has appeared or is forthcoming in Clarkesworld, Strange Horizons, and Apex, among others. A list of her publications can be found at misshallelujah.net, and she can be found on Twitter as @halleluyang, grumbling about Scandinavian languages and making displeased noises about the state of the world.