An Offertory to Our Drowned Gods

The bodies floating on the streets look fuller than Johnnyboy feels. They are pink and bloated, like the click-flash tourists who once inhaled the spirits of their cities. No one talks about the drownings, but Johnnyboy’s father sometimes puts his hands together and whispers to the newly baptized. The water carries sound much faster, he says, this is why no one has secrets any more. The tide brings in so many things: keyboards, used condoms, crucifixes, textbooks. The tide is how Johnnyboy finds a name—a faded basketball jersey, the number seven, Johnnyboy in purple lettering.

Water is an old friend collecting debts, Johnnyboy’s father says, as they scramble to reach higher ground. The twenty-third floor of a call center agency is home for the night, and the scent of mildew and old cigarette smoke lulls them to sleep. The water is silent for now, but soon it will shift and grow angry, and so must they. One day, the water will reach the sky, and Johnnyboy will swim with the stars.

Johnnyboy’s father wraps a sheet of plastic around them. He says the first thing water collects is memory. We are used to being eroded, he tells her, we are used to waiting for the dove and the olive branch and the god saying this land is blessed, this land is for you to take. But the rain did not stop after forty days. Still, the altars burned with incense. For years, it was only water and smoke, tide and candle, until they understood that some gods could be drowned.

The second thing water collects is love, Johnnyboy tells herself. The man she calls her father is not her own. She found him half-asleep in the water, mumbling about his children. He will die soon, maybe tomorrow, and maybe she will mourn for all the nameless things the water has already collected from them.

“Nering?” the father asks, and Johnnyboy says no.

He laughs, What is your name, then. It is not a question. Johnnyboy doesn’t answer.

The father hands her a photograph, wet and crumpled. Three smiling faces. A theme park. Johnnyboy hears the bubblegum music through the paper.

He says, “This is what the water collects last.”

Johnnyboy remembers the iron gates, the mud on her mother’s shoes, the flooded basement, the overturned garden tables, the sirens. They had been summering in her mother’s old home—an ancestral fortress, too cavernous for Johnnyboy’s modern father, too byzantine, too fated to be the house that would fall first. They hadn’t been allowed to leave the compound, but Johnnyboy always snuck out through the maids’ door to shoot tin cans with the children outside.

One day, when her parents rushed an ailing grandparent to the hospital, Johnnyboy snuck the children in through the same door. They left muddy footprints on the polished floors, threw half-eaten macopas and apples in powder rooms, giggled in the hallways (loud enough to rattle the ghosts of her mother’s ancestors). It had been the day before the storm, and the sun was so bright that neither Johnnyboy nor the children wanted to play in the gardens. The children eyed a chocolate cake in the refrigerator, and Johnnyboy led them in eating it with their hands. It was sundown when the children left.

The storm started at 3:08 in the morning.

Johnnyboy remembers this well. As her mother raised her hand to punish her for defiling holy ground (the frosting left stains as deeply as blood), the lights were killed and the television in the other room died mid-theme song. It was as if the entire estate had been murdered in its sleep. Johnnyboy’s father ran to find a flashlight. Johnnyboy’s mother whispered to the old gods. Johnnyboy tried to count the seconds in between the lightning and the thunder.

Soon, her parents rounded up all the people they could still find in the house: the half-blind grandmother, the gardener, three maids, the cook and her infant son, the stuttering guard. The gardener had been trying to pry open the basement door when they heard gunshots. Johnnyboy’s father took the guard’s baton, broke the lock, and let them in.

“S-S-S-S-S-Sir!” the guard said, following him down. Johnnyboy clung to her mother. One of the maids started crying. The gardener made sure the door was shut closed.

Johnnyboy felt water seep into her socks, then into her pants. The basement was half-submerged already, but the hatch was well hidden, and they would be safe, her mother said.

“But what was that sound?” Johnnyboy asked.

“Nothing,” her father said, “nothing at all.”

“Go to bed, anak,” her mother added, “the rain will stop in the morning.”

There was no morning.

Johnnyboy remembers waking up underneath her favorite mango tree. She was alone, maybe dreaming, maybe dead. There was a faint throbbing in her head that made her think of the time she was bitten by a dengue mosquito. Her eyes tried to adjust in the haze. The ancestral home seemed to melt before her, paint running down an old wall, until not even ghosts remained.

The rain was not forgiving, but Johnnyboy did not expect it to be. She wandered, past the drowning plants, past the drowning home, past shattered china and animal bones. She wandered until she was cold and drenched and gray, until she saw the Cuban heel smeared with mud, until she saw her mother’s hands clasped against her breast. There was a hole that went through her hands, through her chest. Not even her gods had saved her.

Her father was probably in the basement. He was probably killed slowly, without respect. He probably had enough time to say the rosary as his lungs filled with water.

Where were the others? Johnnyboy thought. A vague sense of horror had blossomed inside her, but nothing concrete, nothing absolute. She didn’t know where to go, and considered sleeping beside her mother’s corpse, until a voice cried out her name. (Today, she no longer remembers it. She has been Johnnyboy ever since.)

“I’m sorry,” the voice added. In her line of vision stood a young boy, one of the children she used to play with. He looked older than her mother’s corpse. He tried to smile at her. There was mud on two of his teeth.

Johnnyboy remembers all this, remembers everything the water has taken from her, remembers what she must offer to appease the swelling ocean. She is already part of it; where she ends, the water begins.

In the morning, Johnnyboy pushes the man out a window. His body hits the water softly, as if the water already knows how to collect things gently, tenderly, as if it is saying, I have been waiting for you. Maybe the man and his children will meet someplace where the oceans end. Maybe heaven, Johnnyboy thinks, maybe America. 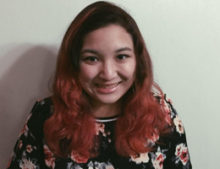 Teresa Naval’s stories are often for and about the Philippines, where she was born and raised. She now attends university in Connecticut and spends most of her time converting Fahrenheit to Celsius. Teresa likes mythology and video games with multiple endings.