The black bird on the mantelpiece spoke. It said, “Nevermore.”

Spade looked up from cleaning his pistol. The bird, a black-lacquered falcon statuette, sat motionless. Spade placed the pistol down on his desk, pushed back the brim of his hat, and approached the bird. “You talk?”

The bird watched him with two small black eyes. “Yes,” it answered. Its voice was eerily familiar somehow.

The bird’s lacquered beak moved when it talked, as if the statue were alive. “Sounds like a mystery to me.”

Spade lit a cigarette. “Well, I’m good with mysteries. I just solved one.”

Spade was perplexed. He had solved the case. The black bird was a fake—a decoy. They’d scraped away a bit of its lacquered exterior and instead of priceless jewels they’d found nothing but worthless lead. He said suspiciously, “What do you mean?”

“You never did find the real falcon,” the bird said. “Don’t you wonder where it is?”

Spade shrugged. “The Russian has it, probably. Let Gutman and the others go after it if they want. They’ll never find it.”

“Wrong,” said the bird. “The Russian doesn’t have it. In fact, it’s right around here somewhere.”

“Good,” said the bird. “Listen closely. Because this is a real mystery—not like your usual work, which is always about who killed who, or who’s banging whose wife. That’s not a mystery, Spade. That’s hardly even a puzzle.”

“Real mysteries,” said the bird, “like—why do we exist? What’s the nature of truth? Is there a higher power?

“They don’t have solutions. That’s what makes them mysteries.”

Spade broke in. “So where’s the real falcon?”

The bird sighed. “It’s so obvious. I’d think you would have figured it out by now. You’re the detective, after all.”

“Didn’t you ever read ‘The Purloined Letter’? The best place to hide something is in plain sight, where no one will think to look for it.”

Spade walked across the room and lifted the black bird off the mantelpiece. It chuckled as he turned it all around. He walked over to his desk and set the bird down, then flicked open his pocketknife and began scraping off more of the black lacquer. Underneath, of course, was nothing but lead.

“You’re getting warmer,” said the bird.

Spade opened a drawer and took out an iron file. He began scraping away at the bird’s leaden neck.

Spade scraped deeper and deeper. Then he took a deep breath and blew, sending filings flying away into the smoky air.

Beneath the lacquer and lead, the bird was made of gold and jewels, which sparkled even in the dim light of Spade’s office. “Congratulations,” cried the bird. “You solved the mystery! You’re rich! Case closed.”

He took up his pocketknife again, and used it to poke the largest jewel. The knife’s tip sank a few centimeters in, as if the jewel were made of chocolate.

Carefully, Spade started scraping away at the jewel.

“I should warn you,” the bird intoned ominously, “that if you keep digging into this matter, you may not like what you find.”

“Of course,” the bird added, “people in mysteries always say that, don’t they? And does it ever happen? No way. The hero goes right ahead, catches the killer, and gets the girl. He gets his picture in the paper, and a handshake from the mayor. So go ahead, Spade. Don’t listen to me. Keep digging. Everything will probably turn out all right in the end.”

The faux jewels fell away like dry scabs. Beneath lay cogs, flashing lights, an intricate network of tiny machines.

“Micro-circuitry,” the bird explained. “That’s what allows me to talk.”

“There’s no such thing.”

“Well!” said the bird. “Look who knows so much! Just because you’ve never seen micro-circuitry, you presume it can’t possibly exist. Read Hume some time, why don’t you?”

Spade poked at the micro-circuitry with his knife. “What is all this?”

“Computers,” said the bird. “Machines. That’s what it’s all about, Spade. Everything’s a machine, in one way or another—your body, the universe. One day you’ll probably be replaced by a machine. Who knows?”

“Sound improbable?” said the bird. “Why don’t you try scraping away at your own outer layer? You might be surprised at what you find.”

Absently, Spade ran a fingernail down the skin of his forearm.

“Leave well enough alone,” said the bird. “Just this once.”

“I think there’s something more,” Spade said. “A deeper layer.” He began to scrape away at the micro-circuitry.

“You’re out of your league, Spade,” said the bird. “Why don’t you just go back to murder, adultery, that sort of thing. That’s more up your alley.”

The bird nodded reluctantly. “Perhaps it isn’t the micro-circuitry after all.”

Beneath the circuitry was a pink, porous surface.

Spade filed away at the falcon’s beak, which cracked off and fell to the floor. He filed away its eyes, its throat. He scraped away tiny circuits and fake jewels, exposing more and more of the flesh.

A living, miniature version of his own face stared back at him from the opening in the black bird’s head.

Spade realized with a start why the bird’s voice sounded so familiar. It was his own. “Why do you look like me?”

“Because our perceptions of things, mysteries for example, are filtered through our own consciousness. If you keep digging for truth, eventually all you find is yourself.”

“There must be something deeper,” Spade insisted.

Spade raised his knife. The bird eyed it nervously. “Uh, Spade? What are you doing?”

Sam Spade had never failed to solve a mystery, and he didn’t intend to start now. “I want the truth.” With an unsteady hand he began to scrape away at the tiny face. Clear amber fluid oozed out. He scratched at the falcon’s throat.

“That’s the jugular vein,” the bird whispered. “You might want to be careful around that.”

Spade sliced it, and blood billowed forth, splattering across the desk.

“Blood,” the bird confirmed. “That’s as deep as you’re going to get.”

Spade set down the knife. “That’s the answer to your mystery? Blood?”

“I never said there was an answer. Quite the opposite, in fact.”

Spade scowled. “That’s not a mystery.”

“Au contraire,” said the bird, “that is a true mystery. Real quests for the truth usually end in fits of self-destruction and bitter disappointment.”

“What?” Spade pressed his fingers to his neck, and his hand came away wet and sticky. He leapt to his feet, ran across the room, and looked in the mirror.

Blood oozed from a gory section of Spade’s cheek, and a deep gash ran across his throat. He seized a cloth to stanch the flow of blood from his neck, but the fabric soaked through instantly.

He spun around and stared at the bird.

“I said you might not like what you found,” the bird said, almost apologetically, “but you didn’t listen.”

Spade sank to his knees, his blood dripping wide, wet spots across the carpet.

“No girl for you,” the bird scolded. “No handshake from the mayor.” It hopped from the desk and strode across the carpet toward him. “I told you you were out of your league.” The bird shook its head ruefully. “But would you listen?”

“Will Sam Spade live to solve another mystery?” the bird asked.

Spade watched as it loomed closer, its bleeding face a mirror of his own. Finally the bird stood before him, casting a long shadow over him.

© 2000 by David Barr Kirtley.
Originally published in Gothic.net.
Reprinted by permission of the author. 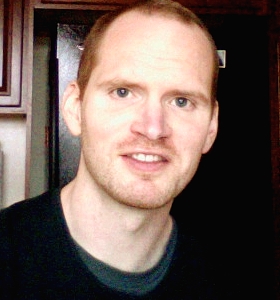 David Barr Kirtley is the author of thirty short stories, which have appeared in magazines such as Realms of Fantasy, Weird Tales, and Lightspeed, in books such as Armored, Other Worlds Than These, and Fantasy: The Best of the Year, and on podcasts such as Escape Pod and Pseudopod. He’s also the host of the Geek’s Guide to the Galaxy podcast, for which he’s interviewed folks such as George R. R. Martin, Richard Dawkins, Paul Krugman, and Simon Pegg. He lives in New York.