I look out the window. The sky is the same dirty grey as the snow left from last week’s storm. I stand up to look closer, to find a backdrop against which I might see what she sees. The radiator is warm against my knees.

“You don’t mean now.” It’s not really a question, but she shakes her head. She looks through me, through another window, at other weather. She smiles. Whenever she is, it must be beautiful.

“Big, fluffy snow. The kind that doesn’t melt when it lands on your gloves. Big enough to see the shapes of individual flakes.”

“Do you know when you are?”

She strains to catch a different view. “1890s, maybe? The building across the street hasn’t been built yet. I wish I could see down to the street, Marguerite.”

Judy isn’t supposed to leave her bed, but I help her into her yellow slippers, help her to her feet. I try to make myself strong enough for her to lean on. We shuffle to the window. She looks down.

“There’s a brougham waiting at the front door. The horse is black, and he must have been driven hard, because the snow that’s collecting elsewhere is just melting when it hits him. There’s steam coming off him.”

I don’t say anything. I can’t see it, but I can picture it.

“Somebody came out of the building. He’s helping a woman out of the carriage,” she says. “Her clothes don’t match the era or the season. She’s wearing jeans and a T-shirt.”

“A Distillers t-shirt,” I say.

I hear the creak of the door. It’s Zia, my least favorite of the nurses. She treats us like children. “Judy, what are we doing up? We could get hurt if we have an episode.”

She turns to me. “And you, Marguerite. We should know better to encourage her.”

“Your pronouns are very confusing,” I tell her.

She ignores me. “Well, let’s get down to lunch, since we’re both up and about.”

Zia puts Judy in a wheelchair. I follow them down to the dining room, slow and steady. She pushes Judy up to the first available space, at a table with only one vacancy. I’m forced to sit across the room. I don’t like being so far away from her. I would make a fuss, but I try to tell myself we can stand to be apart for one meal. I keep an eye on her anyway.

Judy isn’t fully back yet. She doesn’t touch her food. Mr. Kahn and Michael Lim and Grace de Villiers are all talking across her. Mr. Kahn is floating his spoon, demonstrating the finer points of the physics of his first time machine, as he always does.

“Meatloaf again,” mutters Emily Arnold, to my left. “I can’t wait until vat protein is invented.”

“It tastes good enough, Emily. The food here is really pretty decent for an industrial kitchen in this time period.” We’ve all had worse.

We eat our meatloaf. Somebody at the far end of the room has a major episode and we’re all asked to leave before we get our jello. I can’t quite see who it is, but she’s brandishing her butter knife like a cutlass, her legs braced against a pitching deck. The best kind of episode, where you’re fully then again. We all look forward to those. It’s funny that the staff act like it might be contagious.

I wait in Judy’s room for her to return. Zia wheels her in and lifts her into the bed. She’s light as a bird, my Judy. Zia frowns when she sees me. I think she’d shoo me out more often if either of us had family that could lodge a complaint. Michael and Grace are allowed to eat together but not to visit each other’s rooms. Grace’s children think she shouldn’t have a relationship now that she lives in so many times at once. Too confusing, they say, though Grace doesn’t know whether they mean for them or for her.

“How was your dinner?” I ask Judy.

“I can’t remember,” she says. “But I saw you come in for the first time. You said ‘How is this place real?’ and young Mr. Kahn said ‘Because someday all of us will build it.’”

“And then I asked ‘When can I get started?’ and he said ‘You already did.’”

Judy takes my hand. I lean over to kiss her. 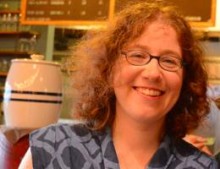 Sarah Pinsker is the author of the novelette In Joy, Knowing the Abyss Behind, winner of the 2014 Sturgeon Award and 2013 Nebula Award finalist, and 2014 Nebula finalist, A Stretch of Highway Two Lanes Wide. Her fiction has appeared in Asimov’s, Strange Horizons, Fantasy & Science Fiction, and Lightspeed, and in anthologies including Long Hidden, Fierce Family, and The Future Embodied. She is also a singer/songwriter and has toured nationally behind three albums; a fourth is forthcoming. In the best of all timelines, she lives with her wife and dog in Baltimore, Maryland. She can be found online at sarahpinsker.com and on Twitter @sarahpinsker.