LIGHTSPEED #1 was launched in June 2010, and now eight years later, we’ve reached a milestone: Issue 100. To celebrate, we’re publishing a super-sized issue, with ten original stories–more than twice the amount of original fiction than usual–plus ten reprints and some special nonfiction to boot. And to make things even more commemorative, the vast majority of our fiction in this issue, both original and reprint, comes from our most frequently published fiction contributors: the LIGHTSPEEDiest writers to ever LIGHTSPEED. It’s a distillation of what we’re made of, and we’re beyond excited to share it with all of you. 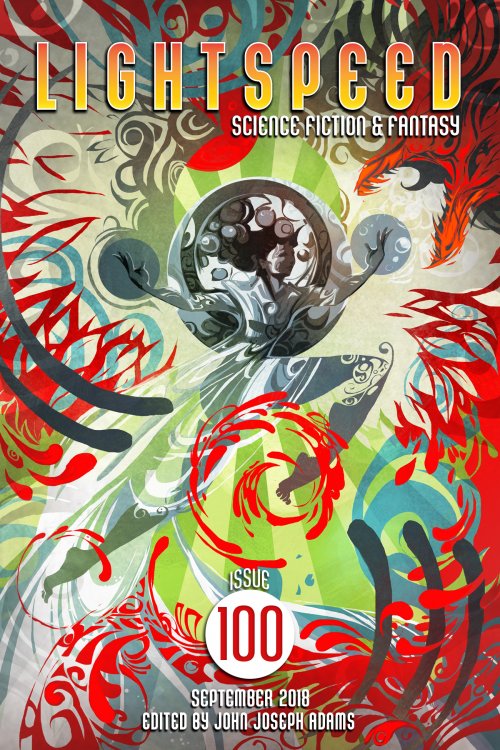 Be sure to check out the Editorial for a run-down of this month’s content (there’s a lot of it!) and to catch up with all our news and updates.

To celebrate our 100th issue we’ve asked members of the Lightspeed community—contributors and staff—to name their favorite stories or experiences working with the magazine. It’s a veritable smorgasbord of wonder!

Ammuya birthed five hundred gods, followed by a monster. That was her first mistake. The gods tormented the monster because they feared it. They bound it inside a black hole, and the monster’s hatred seethed. Eventually the monster raged so fiercely he escaped the event horizon. Then he hunted down his siblings, one by one. On a silent desert planet, Ammuya cried for her children.

Some kids do that—they imprint on empty objects, they give them stories and opinions and a will, until they feel half-inhabited even to grownups, who have to pretend that they care how Chrissy’s blanket feels about things for so long that one day when Chrissy’s at school they step on the blanket and apologize. I did it with anything, when I was young; my toys were always in the middle of some intense plot that nobody outside could understand.

I’m a scientific pantheist. Science is awesome—literally. It inspires awe in me, much the way that I suspect many people are inspired by more traditional religious teachings. So for me, it only makes sense to craft the stories our ancestors might have, had they known more about the universe we live in.

The thing that seeded this story was a moment in Brent Watanabe’s San Andreas Deer Cam, which hacked a version of Grand Theft Auto to make the POV character a deer. I watched it for two hours straight the first time I saw it; when it walked into the ocean and I realized that I was trying to determine the exact moment it had died, I got unsettled enough to close the window. I never shook that experience and that image, though.

Harry and Marlowe and the Secret of Ahomana

Wine-dark sea? No, the water was black as tar when the Kestrel crashed into it. The storm came up so suddenly, they might have hit a wall. It proved too massive for the airship to try to fly around, or over—it could only ascend so high, and the storm reached higher. They stayed aloft as long they could with a torn bladder and damaged engine, searching for some spit of sand to alight on. The lightning seemed to flash green around them.

Mike and Jessie were walking in the park. The trees high above their heads stretched to touch each other, their leaves letting only the tiniest slivers of light through. Mike watched the freckles of light spot Jessie’s brown face, her shirt, her arms. He tried to snub them out with his fingers. It was a long day for them. They’d spent a few hours walking around the park, just talking. About old dreams and new ones, black riots and urban decay, the secrets of their hearts and the mysteries of the universe.

This is really the first Harry and Marlowe story that’s tackled colonialism head-on, and I hope I did the topic some justice. Really, I could only write Victorian-inspired adventure stories for so long without addressing colonialism. Many commentators have noted that steampunk offers a chance to deconstruct and subvert many of the received tropes of Victorian adventure stories.

I love fiction that explores spatial, dimensional, and time travel. However, each has a different effect on a story. They explore different themes. Teleportation worked for these characters and this story because it is fleeting, over in an instant. Often writers will use it as a superpower, or an answer to long-distance travel, or to explore philosophical questions about who actually shows up on the other end, but I was more interested in the fleeting moment itself.

The Last to Matter

Kayn knew he was being rejected by the orgynism for almost a full year before it fully expelled him. He could easily live a million years past this humiliation and never understand what he had done to deserve such a rejection from the collective that had loved him so well, for so long. He had been one of the orgynism’s founders, the man who had provided its organizing principles and solicited the first participants.

I have long used as a story generation tool the personal premise of “secret sequels,” tales that take place in the worlds of various stories by others, all important to me, but not belonging to me. I use the original as jumping-off point, then file off the serial numbers, secure that what I’ve brought to the canvas is sufficient to justify the tale as entirely mine, without being slavish carbon copy. It is a function of asking the question, “What would happen next?”

The Coin of Heart’s Desire

In an empire at the wide sea’s boundaries, where the clouds were the color of alabaster and mother-of-pearl, and the winds bore the smells of salt and faraway fruits, the young and old of every caste gathered for their empress’s funeral. In life she had gone by the name Beryl-Beneath-the-Storm. Now that she was dead, the court historians were already calling her Weave-the-Storm, for she had been a fearsome naval commander.

This month, we fired up our consoles and computers to find exciting new speculative video games. Reviewer Jenn Reese shares some of her favorites.

How to Become a Robot in 12 Easy Steps

How to tell your boyfriend you are in love with a robot: 1) Tell him, “I may possibly be in love with a robot,” because absolutes are difficult for biological brains to process. He won’t be jealous. 2) Ask him what he thinks of a hypothetical situation in which you found someone who might not be human but is still valuable and right for you. (Your so-called romantic relationship is as fake as you are.) 3) Don’t tell him anything.

The worst day of Wells the Magician’s life begins pleasantly enough, with a shot of whiskey at the Lost Kingdom bar. It’s a birthday party day, and as all low-rent magic men know, birthday party days begin with booze and move laterally through coffee, cake, and whichever divorcee can be convinced to unhook her bra, whether offsite or in a back bedroom. Onward from there into (dire case) helium, (better case) weed, or (best case) coke.

This interview is apparently a course in writer-brain and the way writer brains transform entire histories into fiction! The lemon elements here came originally from a lemonade stand in Idaho, one that, when I was a teenager, was a huge draw, because of the girl who worked at it. The stand was lemon-shaped, and the girl was gorgeous, dressed in lemon yellow, and had lemon yellow hair. She somehow managed to be both voluptuously innocent and palpably good, and also, you know, a living lemon.

John Joseph Adams might be Lightspeed’s editor and publisher, but for many of our readers—and heck, even the staff—he’s a bit of an enigma. How can he run two magazines, his own novel imprint, oversee the Best American Science Fiction and Fantasy series, and create more amazing short fiction anthologies? Does he ever sleep? Mystified, we asked our staff interviewer to find out a bit more about JJA.