Sutthiwat Dechakamphu is a concept artist, graphic designer and illustrator in Thailand. You can see what he’s working on on his blog at therafa-art.blogspot.com and more of his work at iddpd4studio.blogspot.com.

You received a traditional Fine Arts degree in painting in college. When did you switch to working digitally?

I graduated in fine art, but I taught myself digital art in my last year at university. I had done some cover work for a book company traditionally, but sometimes they needed way too many fixes, which was very difficult to do traditionally. When they told me that I had the option of working digitally, that made me decide to learn the program. I think it’s been a better way to go.

What made you decide to pursue commercial art?

When I was kid, I liked to draw fantasy or science fiction things because it was very enjoyable spending time with those subjects. When I grew up, there was no concept art school here in Thailand, so traditional art school was the only choice for me. After I graduated in 2008, I was an assistant artist in China for five months. It was very hard work and did not make good money, so I sent my portfolio to a new game company in Thailand. I liked them a lot and got to do concept art for them. I improved a lot in 2009 and after only one year I became the lead concept artist.

You have a very interesting mix of work on your website—illustration, every kind of concept art subject, and traditional portrait work. What is your favorite to work on?

Actually, I like them all, but the concept art is my favorite because the things I design come alive on video games.

Most of my work right now is illustration for a card game. Second is concept art for games.

What can you tell me about your cover illustration, Zora?

In the picture is Zora in wolf mech armor. She’s a character from the video game Planet Cyrene, which is an expansion of the MMO Entropia Universe.

Where do you draw your inspiration for your illustrations? I read that your Wizard of Plague illustration came from a dream. What motivates or inspires you to create these images?

I always draw what I am impressed with most. I draw inspiration from songs, movies, and the artists I like. For Wizard of Plague, I had a nightmare. It felt very real at the time, so when I woke up I drew it that night. It was scary but I didn’t want to lose what I saw in the dream, so I just drew it up.

Which of your pieces is your favorite, or which are you the most proud of? Why?

My favorite piece is Jiwa Reina. I made it because I had no job and had a lot of free time. I spent a lot of time on it and used many techniques, like smoke brushes, texture brushes. It was very fun. When I posted Jiwa Reina to the internet, it made a lot of people follow my work. And then I got a job.

Who are some of your favorite artists, or who inspires you?

I have many favorites, but I give the most credit to Thai artist, Mr. Skan Srisuwan. I found an art book in my college bookstore called Thai Digital Painting. I saw his very cool work and was impressed with the work style. I read his profile and saw that he had graduated from a fine art facility and was self-taught digitally. That inspired me to do this as well.

What is something that you’d really like to paint but haven’t had a chance to yet?

Someday, I’d like to do my own artbook: how-tos, step-by-steps, and secret techniques. But sadly I don’t have the budget or the time. It’ll only happen if I have support from a sponsor or when I am rich.

Thanks so much for the peek into your artistic process! 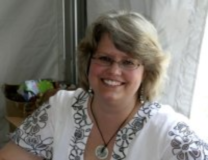 From her earliest memories Tara Larsen Chang has been captivated by the illustrations in fairy tales and children’s books and couldn’t think of anything else she’d rather do when she grew up than create her own. When she’s not painting in the studio, she can probably be found working in her gardens to make sure that there are plenty of havens for visiting fairies.