You probably guessed this was coming, so we’ll get it out of the way, but what are your top three choices for your own species reassignment? I won’t ask you to rank them all (unless you feel like it).

I think the point of the story is that you’d have to be a glutton for punishment in order to choose any of them, but given my own druthers I think 2562, 1427, and 8883 are infinitesimally less awful than the other options.

With that out of the way, what was the inspiration behind this piece? In particular, this one is different from your other Lightspeed stories in that it isn’t shaped like a conventional narrative, although it still sketches a dystopian setting in the margins and makes a point about the state of the current/near-future world. Was there a particular influence (either real or fictional) that sparked this piece’s structure?

Beats the crap out of me, honestly. It’s an old idea of mine, one that has already fed one story, “Just a Couple of Extinct Aliens Riding Around In A Limo,” from my Vossoff and Nimmitz sequence. In that tale, published in Science Fiction Age in January 1995, they wind up hanging from a cave wall as Pylthothi Screaming Stink-Moss, and the appearance of that species in this compendium is a tip of the hat to an old premise, successfully recycled to different effect.

Between the lines, readers can infer that this story takes place in a future that has suffered an ecological collapse, as suggested by information like the extinct butterflies and ruined seas. While that isn’t quite Earth’s current reality, it is, perhaps, not that far off. Do you think that human beings have pushed the Earth beyond its limit for recovery? What role do you think fiction has in warning, or maybe criticizing, people about this?

I think the Earth will abide. Earth can recover from anything we do to her, even if it takes entire geological epochs. The chemical processes that resolve as life will continue to churn, and eventually, maybe long after we’re all gone, a fresh diverse web of life will emerge, and it will be one wholly alien to what we see when we look out our window. It’s only the current tenants, including the many who have done nothing on the scale of our own destruction, who are royally screwed. Absent action of a spectacular sort, unlikely because these prospects bother many of us not at all, I think we can say goodbye to polar bears, to giraffes, to whales, to coral reefs, and to the species that includes any number of Ahmeds and Stacies. But I may be wrong.

Building on that, I’m curious as to how you see satire and humor as a way to address serious issues like the global destruction and political tribalization that haunt this story. Do you see it as gallows humor, or is it a way to make a point in the hopes of inspiring change?

Each of the species for potential reassignment shares some aspect with humanity, but none of them seem to have the full combination that renders humanity a “‪contagion.” Is it a lack of some quality, then, that makes humans too dangerous for the galaxy, or is it an overabundance? ‬‬‬‬

If there is any common factor to all the species I posit, it is that the individuals are stuck where they are, unable to alter their environment to advantage beyond what they’re given at the onset. Our problem is that while we have the gifts of industry and inventiveness, we largely do not have the gifts of seeing (or caring about) consequences, or planning for the long term.

Finally, do you have any upcoming projects that you’d like to announce? Beyond mere upcoming publications, are there any new and exciting ideas that you’re starting to explore?

A mainstream thriller is making the rounds. As of now, I am debating whether the next is a haunted house story, or something else. In the meantime, the current issue of Analog has “A Stab of the Knife,” the clash between my series characters Draiken and Andrea Cort. 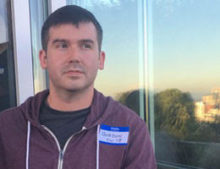 Gordon B. White is the author of the collection As Summer’s Mask Slips and Other Disruptions (Trepidatio Publishing 2020). A graduate of the Clarion West Writing Workshop, Gordon’s stories have appeared in dozens of venues, including The Best Horror of the Year Vol. 12 and the Bram Stoker Award® winning anthology Borderlands 6. He also contributes reviews and interviews to outlets including Nightmare, Lightspeed, Hellnotes, and The Outer Dark podcast. You can find him online at gordonbwhite.com.