What was the inspiration behind this story?

Much like the beginning of the story, I was walking with my significant other and the thought came to me: What if we could teleport right now? My wife laughed at me, but it led to a really great conversation about what it would mean if it only happened once with no way to actually prove it. I wouldn’t be able to let go, I had said. That experience would be too profound for me. My wife had a more “let the mystery be” perspective. I thought her perspective was better than mine. The idea stayed with me for a long time and eventually I decided to write it. I wanted to explore what that difference of opinion would do to a relationship.

There are elements in this story that allow readers to see “Jump” as being about more than just teleportation and a couple’s struggles with it. It’s also accessible enough that readers can miss some of that subtext and still get an entertaining read. Did you write “Jump” with that intention in mind or was this a happy accident?

Pretty early on it became apparent that I was exploring a lot more with this story. My initial goal was to explore the speculative element and its effects, but I soon found myself interested in how the story works as metaphor. A moment of inexplicable teleportation is exciting, but it also stands in for so many things in our lives that become so big they eclipse what matters.

Mike represents masculine ideas I’m continually challenging in myself, this need to have what he wants at the center of everything, this over-valuing of his own perspective at the expense of everyone else’s. It is a very male quality and one I wanted to deconstruct in myself and on the page. Mike values big moments beyond all the little moments that add up to a life, and he and everyone around him suffers for it.

On the other hand, Jessie is a much more mature character and takes a less reductive view of the magic at the beginning of their relationship. She wants change. She wants evolution and she is much more comfortable with taking new life events as they come. The jump is indeed magical for her, but she tries to accept that while moving forward and not devalue herself because of it. That perspective surpasses a fleeting moment of magic.

By the end of it, they find themselves at a new crossroads. It is ambiguous whether Mike has learned anything or what will happen to their relationship moving forward. We don’t even know if the magic has truly returned. But I think the magic is the least important part of the ending. In other versions of the story, I took a stronger stance (one positive, one negative) but I think it is better to leave it at the crossroads. I like the questions it ends with: Can things once broken be mended? Can a person or relationship be redeemed?

Why was teleportation the chosen form of travel for these two characters, as opposed to the myriad of other SF options out there?

I love fiction that explores spatial, dimensional, and time travel. However, each has a different effect on a story. They explore different themes. Teleportation worked for these characters and this story because it is fleeting, over in an instant. Often writers will use it as a superpower, or an answer to long-distance travel, or to explore philosophical questions about who actually shows up on the other end, but I was more interested in the fleeting moment itself, and what it would mean if you couldn’t repeat it. If a character travels through time or dimensions, the conversation shifts towards whether the character will get back to their time or their universe. But if a character teleports without explanation or recurrence in a world like ours, the conversation shifts towards the exploration of the miraculous and how it affects that individual on a personal level.

Can you talk about any other projects you’re working on?

Well, I just finished edits on my first novel. It is called The Lesson and is about an alien colonization in the U.S. Virgin Islands in the near future. Set mostly on my home island of St. Thomas, the novel explores how contact with alien life can alter the beliefs, politics, and fates of people in a small place. It is also a critique of colonialism. It will be out in June 2019.

Along with revising a few short stories, I’m also working on a second novel. This one will be urban fantasy. I’ve described it as a modern retelling of the civil rights movement of the ’60s and ’70s, but with monsters. One of the main characters of the novel will be a soucouyant, a blood-sucking entity from Caribbean folklore. I wrote about her in my short story “Loneliness is in Your Blood” and I thought it would be interesting to revisit her story within the context of a larger social revolution. 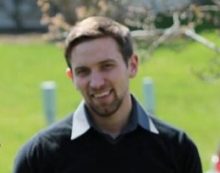