This story reads as more fantastical than most “harder” SF (casinos in space!), but clearly with SF extrapolations that grounded its wilder elements. Was there a desire to explain as much unveil in this work?

Most of my fiction tends to fall into crossover territory—sf / fantasy, fantasy / noir, fantasy / politics, speculative / mainstream, etc.—so the fantastication within an ostensibly hard-SF setting doesn’t seem odd to me! To tell you the truth, I hadn’t really thought about it until you mentioned it. What I set out to do was to try to create a future society where people simply take for granted a lot of things that we’d regard as impossible. Hence the shapeshifting, the body-swapping, the “astral projection” (through blances), distance not being much of a barrier, and so on. So I guess that, yes, this meant I had to do a deal of fantastication.

On the other hand, I was delighted to discover that one of those pieces of fantastication—the law of conservation of data itself, which I’d sort of made up out of whole cloth—is not so far adrift from some of the ideas that I later read about in books and articles by Real Scientists.

Or maybe I was just kidding myself and that wasn’t what they were saying at all.

I loved the detailed sharing of information on not just the “Law” but the world of the story, and yet among the regular critiques of science fiction (where the strange needs to be explained far more than other genres) is that “info dumps” ruin immediacy, urgency, etc. How did you keep the exposition so fascinating?

I’ve always rather liked infodumps myself. For me as a reader, they can actually help the pacing, if they’re used right—look at all the infodumps in Douglas Adams’s The Hitchhiker’s Guide to the Galaxy, for example: Especially in the original radio version, they’re not only an absolute delight in themselves, but they give a real sense of scale and time’s passage to the narrative. And I can remember reading many years ago one very long hard-SF novel where in the end I guiltily started skipping the actual story parts and just reading the infodumps, which were full of fascinating bits of real and invented science.

So I’m really glad you found the infodumps in “The Law of Conservation of Data” didn’t detract from the rest—phew!

Second-person is a harder sell, but by using it you enmeshed us in the protagonist’s journey with Suze, Mana, and the gang. Why was second-person the best POV for the story?

The story actually started off being told in the second-person future tense, but after a while I came to the conclusion that the only person who’d enjoy that would be me, hellishly impressed by my own second-adolescence cleverness, etc. So after a bit of thought, I reverted to second-person present.

I did want very much to use the second-person, though, because I wanted to get across the sense that this story isn’t happening to aliens (even though humans of the far future, assuming we last that long and do expand into space, will be different enough from us to be of different species [plural] from us) but to people—to you, in other words.

Among my favorite aspects is the corporate nature of sex that the group is exploring. Even in a place of galactic lust and sin like the casinos, there’s a lot of dialog on contracts, insurance, accountability, and consent (including the labeling of places like Ten Percent Extra Free). What compelled you about this subject and its relation to the world?

Personally, I find the way that legal matters infest our daily existences utterly depressing. At the moment, thanks to a recent spell in the hospital (congestive heart failure, since you ask), I’m dealing—or, rather, my superbly patient wife is dealing—with bureaucracy gone mad in the form of the American healthcare system, so I imagine that if I were to rewrite “The Law of Conservation of Data” today, this preoccupation would show through even more clearly.

The main book I’m working on at the moment, scheduled for next spring by See Sharp Press, is a new edition of my 2007 offering Corrupted Science: Fraud, Ideology and Politics in Science. As you can imagine, with a president who thinks climate change is a hoax and an Environmental Protection Agency headed by someone who seems hell-bent on destroying the environment, climate included, I currently have more material coming in than I quite know how to handle! I’m also doing a prodigious amount of updating in other areas of the book, and filling in some gaps—stuff I simply didn’t know back in 2007. All told, the new edition is expected to be up to fifty percent longer than the first one.

Aside from that, I’m about to inflict upon my agent another nonfiction book, provisionally called Psi High, about purported mental powers like ESP, prophecy, and faith healing, the pseudoscientific investigations thereof, and the methods many of the practitioners deploy to separate the credulous and the vulnerable from their cash.

As for fiction, I have a few short stories I’m tinkering with at the moment. And I’m rather lackadaisically developing a cozy/hardboiled detective novel—Miss Marple meets Mike Hammer sort of thing—possibly to be called Tea-Shoppe Tramp. I’m not certain if that one’ll ever see the light of day, to be honest, but it keeps me off the streets. 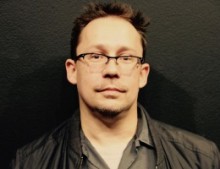