What is the appeal of “weird west” fiction? Why do writers—or you yourself—write about it? What do you think readers like about it?

I’ve always been drawn to genre mash-ups, I think, because they’re a way to honor traditional tropes and yet cast them in a new light, to essentially play tropes off against one another. For me, the western has always been one of the most adaptable—it works well with fantasy, horror, or even science fiction. For me personally, there’s just something about many of those western tropes that appeals to me and evokes an instant sensory reaction.

What are some of your favorite examples of weird westerns (in any media), and what makes them your favorites?

This is a tough one, if only that I could rattle off a long list. Firefly is probably my favorite blend of science fiction and westerns (and one of my favorite television shows). In fiction, I love Joe Lansdale’s work in weird westerns, including his Jonah Hex comics with Tim Truman. Also in comics there’s The Sixth Gun by Cullen Bunn and Brian Hurrtt. A few novels to round out the list would be The Six-Gun Tarot by R. S. Belcher, The Half-Made World by Felix Gilman, and, of course, Territory by Emma Bull. All of these do a great job of capturing the western feel while injecting something new into the equation, usually something supernatural or fantastical.

This is your second Quentin Ketterly story after The Way of the Wizard’s “Card Sharp.” What brought you back to Quentin and the “Card Sharp” universe?

I felt like I had only scratched the surface of what could be done with the Cards in the first story and I wanted to explore that a bit more. Early on, I decided that Quentin’s story would be ultimately told over three separate short stories. In the first story, he basically makes his peace with his past. I wanted to also consider what he would do with the Cards moving forward and also consider the cost as well.

Have you worked out the magic system of this universe or are you filling it in story-by-story? For “Second Hand,” did you first come up with the additions to the magic system (magical objects, potential to steal others’ Cards)? Or did you start from the characters (the ad hoc family of Quentin and Hiram) and the story you wanted to tell?

I started with the story and the characters. I had a good sense of the basic fundamentals of the magic system when I wrote the first story, but there seemed to be a lot of room for exploration and adding new elements. Gunsmith’s application of the Cards, for example, was something that just came with this story. And I always felt that there was a much darker side to the magic of the Cards, which cropped up here as well. But really what propelled me through this was the relationship between Quentin and Hiram. And ultimately what having this power does to people.

In “Second Hand,” danger is pretty synonymous with other people: Hiram vs. the gamblers, Quentin and Hiram vs. other Card Sharps, mothers vs. adopted daughters—and a possibility of Quentin vs. Hiram at the end. It seems like the further west Quentin goes, the less community and trust there is. Is that an effect you were going for? Do you see this “everyone for himself” conflict as particularly fitting with the western setting?

I don’t know if I see it as part of the western, necessarily. I think there’s something to losing community the further west you go, into the frontier where it often is every man (or woman) for themselves. But I think I ultimately see it as more a result of using the Cards. It separates you from the average person and also can set you up for conflict with other Card Sharps.

Did you do a lot of research—historical or genre—before writing this piece? Why move the action from the Mississippi River of “Card Sharp” to the Wyoming Territory and points west?

I did some research, but I don’t know that I would call it a lot. I tried to keep things accurate, basically. As for moving, I felt that Quentin would be roaming, trying to find out as much as he could about the Cards, and that would take him farther afield, and I wanted to get them closer to the frontier. I am currently toying with a novel set in this universe and that requires a lot more research and would involve a few more locations as well. But it’s the frontier that always draws me, out on the edge of civilization where there’s no law and plenty of danger. It is a great place to draw on the “weird” of the weird west.

Lastly, did you ever consider telling the story from a first-person point-of-view? Or from Hiram’s POV? Did you ever consider including flashbacks (as in “Card Sharp”) or did you always know this sort of mystery story required a more linear structure?

I don’t remember if I ever considered first person. I think for this one, because it’s focused on Quentin and Hiram, that if I had based it in one or the other’s POV then it would feel too weighted in one direction. I do write a lot of first-person stories, but this one just felt more like a third-person story. I don’t think I considered flashbacks for this one either, though I did return to that (in a fashion) for the third story. 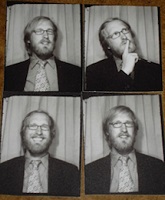 Ben Blattberg is a freelance writer interested in speculative fiction, the 19th century, and the overlap between them. (Fun trivia: everyone in the 19th century wrote an automaton story.) Among his credits, he has presented on Edgar Rice Burroughs and Ursula K. Le Guin at the Science Fiction Research Association conference; written about 1950s sf for the New York Review of Science Fiction; and gone on and on about 1990s pen-and-paper roleplaying games at Pornokitsch.com. He currently lives in Texas, blogs at incremental-catastrophe.blogspot.com, and tweets at @inCatastrophe.