In “The New Atlantis” there is a joy in mystery and murky mysterious lights in the darkness. Things that slither are sinuous and musical. The deep ocean sequences feel like a delightful inversion of H. P. Lovecraft’s fear of things unknown and mysterious. What is your relationship with the work of H. P. Lovecraft?

You have commented that the Lao Tzu’s Tao Te Ching has influenced a lot of your work and I feel like the pull of yin and yang is strong in “The New Atlantis.” How consciously were you drawing upon this influence while working on this story?

Not consciously at all; but when a way of thinking, such as Taoism, has been settled deeply in a person for a long time, it tends to influence what they say and do.

“The New Atlantis” combines such different elements, how did it come about? Was it a lengthy process?

I wrote it a long time ago, so don’t trust my memory . . . but I don’t recall having problems with it once I realized that what I thought were two different stories was one story.

The “land” story was nearly complete; the “undersea” story was unfinished. When I saw they were separate parts of the same story, all I had to do was figure out how to combine them — where and how they should interlock with each other. And doing that enabled me to see how they both should end.

I find that, as someone who reads a lot of speculative fiction, my instinctive way of reading a story is often more literal and assumes everything is factual, while readers of realist fiction might interpret fantastical elements as metaphors or dreams. People from different reading cultures (I was going to say genres, but genres are diverse enough that they contain many decoder rings) are trained to collaborate with the text in different ways. As an author that crosses many divides and cultures, what has been the most interesting or unexpected way a reading culture has engaged with your text?

It’s a nice question, but I don’t have an answer. How children (under ten) read, understand, interpret fiction is sometimes surprising, but the common adult assumption that kids don’t know the difference between real and make-believe is naïve. I think kids often know it better than adults do.

Who is your favorite political activist?

I guess I don’t have one.

In your National Book Foundation Medal acceptance speech, you said we need writers who remember what it is like to be free. It reminded me of Augusto Boal’s Theatre of the Oppressed and Rainbow of Desire projects, where it speaks to the police that have gone from outside ourselves to inside our heads. What do you think are the greatest challenges to writers’ freedom?

In this country, unchecked growth capitalism: the irresponsible control corporations and profiteers are allowed and encouraged to maintain over the culture as a whole. In many countries, including ours, the rise of religious fundamentalisms that repress expression, restrict thought, and disrespect humanity.

It’s a little bit depressing to see how long scientists and creators have been banging on about climate change. When you wrote this story in 1975, what did you think 2015 would be like? What do you think 2055 will be like?

The story itself answers the first question (sea-level rise is an all-purpose metaphor for the destruction we were so clearly wreaking on our habitat). As for the second question, what I think, at age eighty-five, about the year 2055 doesn’t matter. What matters is what we/you do about it.

Who are you reading right now?

Roz Chast, Can’t We Talk About Something Pleasant?

What needs destroying in fiction?

The belief that one should buy books from Amazon. 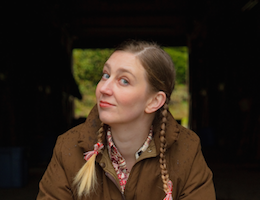 Liz Argall’s short stories can be found in places like Apex Magazine, Strange Horizons, Daily Science Fiction, and This is How You Die: Stories of the Inscrutable, Infallible, Inescapable Machine of Death. She creates the webcomic Things Without Arms and Without Legs and writes love songs to inanimate objects. Her previous incarnations include circus manager, refuge worker, artists’ model, research officer for the Order of Australia Awards, farm girl, and extensive work in the not–for–profit sector.