You treat the water and the road of the title as characters in their own right. They have as much at stake as Oliver does. Tells us about the inspiration for this idea.

I was living in Minneapolis when I wrote this story, and I learned that the lake in Powderhorn really did shrink down to a puddle of its former size during highway construction. The highway in question was a deliberately aggressive act of urban planning; it veered out of its way to bulldoze particular neighborhoods, and ultimately enclosed the wealthy downtown area like a protective moat. This local history was simmering in the back of my brain when the 35W bridge came down. It just suddenly collapsed into the Mississippi. Those two random events felt like linked acts of war.

I love how Oliver’s pursuit of justice, as he understands it, evolves as the gray areas of reality become more apparent to him over the course of the story. I found his journey very relatable as an older reader. What sort of techniques and approaches do you use when coming up with a character like Oliver for older readers?

Maurice Sendak famously said that you can’t write for children. They’re too complicated. “You can only write things that are of interest to them.” Most of my protagonists are very young, but Oliver’s story strayed into territory that interested me as an adult. Eleven-year-old me would have found the conflict between water and road incredibly frustrating. What can a childhood sense of absolute right and wrong do in the face of an ancient, intractable grudge?

The technique involved is just “pay attention to what interests you.” It’s impossible to generalize what children are like, as though they were all the same and uncomplicated. It’s equally impossible to arrive at any fixed idea of what we were like as individual kids. But we can remember what interested us, what captured our attention at the time.

China Miéville said this about Joan Aiken in a Locus interview: “If that kind of writing hits you at the right time when you’re a child, the impact is like nothing else ever.” I love the impossible, absurd, hubristic ambition required to strive for that level of impact. I also love how those ambitions are tempered by goofy, playful irreverence. Writing for children is very serious work, but it only works if we don’t take ourselves too seriously.

SFF is my home. I always intended to write in genre. It wasn’t always the plan to write for kids, but it probably should have been. I never needed books more than I did when I was eleven.

In a previous interview, you listed Ursula K. Le Guin, Sir Arthur Conan Doyle, and Susan Cooper as influences. What aspects of their work have made an impact on your current writing style? Did you have one or more of these authors in mind while writing this story?

Tricky as it is to sequence my own literary DNA and sort through its influences, I suppose this story takes the mystery-solving ethic of clear, clean justice and smacks it up against the sort of moral complexity we find in Le Guin and Cooper’s work. Sherlock Holmes was probably somewhere in the back of my brain when I wrote Oliver, though I think the kid has even more Batman in him. There’s something wonderfully, frighteningly childish about Bruce Wayne’s quest to personally confront injustice. That sensibility makes more sense when it comes from a kid.

Do you have any publications coming up that you can tell us about?

A Properly Unhaunted Place comes out next summer. It’s about ghost appeasement specialist librarians at a haunted Renaissance Festival. Kelly Murphy is creating the illustrations, and that makes me very happy. 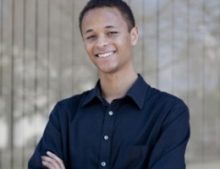 Christian A. Coleman is a 2013 graduate of the Clarion Science Fiction & Fantasy Writers’ Workshop. He lives and writes in the Boston area. He tweets at @coleman_II.