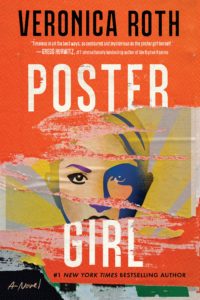 Greetings, readers, and welcome back to another book review. This month we’ll be taking a look at a near-future dystopic meditation on guilt, surveillance, and what comes after the revolution; Poster Girl, by Veronica Roth.

Poster Girl initially starts off in a prison ghetto of political leftovers from the previous Seattle-Portland megalopolis regime (the Delegation), set within the actual sprawl of the mega-city. One of the survivors, Sonya Kantor, is trying to scrape together something resembling a life after losing her entire family—a difficult task made even more so due to her previous role as the literal face of the overthrown surveillance state’s propaganda posters, which has earned her the epithet “poster girl.” To make matters worse, the new government (the Triumvirate) has decided to set her what seems an impossible task—find a girl who went missing more than a decade ago and return her to her parents, in exchange for freedom. Left with no other choice, Sonya accepts, but her search will reveal far more secrets than just the fate of a missing girl.

The first thing that really struck me about Poster Girl was Roth’s writing style, a sparsely evocative collection of words that build over time into rich tapestries, invoking the worn-down and threadbare feel of a frayed society barely clinging together. Whether it’s the Delegation settlement that Sonya initially starts in, the surrounding environs of the megalopolis, or the crumbling outskirts bleeding away into resurgent wilderness, every location Roth introduces us to is simultaneously the sketch of an intricate painting as well as a fully realized piece of the painting itself, and this isn’t just limited to the worldbuilding. Roth’s characters are given even more attention, slowly filling in shades of memory and regret that swirl together in a tangled web of guilt and remorse, and by the end of the book I felt like I understood everything about what drove them, as well as the traumas they endured.

The second thing I thought was extremely well done was Roth’s focus on surveillance without making it an overbearing part of the book. It’s clear that Roth has spent quite a deal of time considering the repercussions of an omnipresent surveillance state, both the positives and negatives, and what that means for the citizens of that state in both their daily lives and long term dreams. The contrast between Sonya’s previous life under the surveillance-heavy hand of the Delegation and her current life under the backlash of the Triumvirate is exquisitely crafted, and the book raises numerous warnings and questions about our own society and where it might lead. I do wish Roth had spent a bit more time on a particularly interesting thought that came up near the end of the book, that of a surveillance economy being used to guide people into desired roles/lifestyles, but overall I was very satisfied with the depth and presentation of Roth’s ideas.

Finally, I’d like to talk about the theme of guilt that pervades the entirety of Poster Girl, particularly as it relates to Sonya, the protagonist. Roth does a superb job of taking us through Sonya’s evolution from embittered survivor to slightly more experienced and world-wise survivor, but her journey isn’t a typical catharsis of absolution and happily ever after. Instead, Roth chooses the more complicated (and realistic) path of illustrating how trying to make amends means understanding that forgiveness is up to those you’ve hurt, not whether or not it’s something you feel you deserve, and regardless, life goes on anyways.

Overall, while Poster Girl may not be the most uplifting book (though it does retain a core of bleak optimism), it’s one I greatly enjoyed reading, both because it made me think and because it built a world I could easily see us veering into. Roth should be highly credited for taking the coldly functional state dystopia formula (made famous by novels such as 1984 and Philip K. Dick’s work, among others) and turning it into something uniquely her own, as well as doing it in a way that feels both topical and timeless, and I highly recommend Poster Girl to anyone who cares about who might be watching.

Read if: You click “no” to cookies; you wonder who watches the watchmen; you’ve ever seen technology change but human nature stay the same.