I’ve been on a bit of a space kick recently, so for this month’s book review column, I wanted to take a look at several midlist space operas. These are the books that haven’t attracted the critical acclaim that books like Ann Leckie’s Ancillary trilogy or Iain M. Banks’ Culture novels have garnered in recent years, but which are enjoyable, entertaining ones nonetheless.

In their 2006 anthology Space Opera Renaissance, editors David G. Hartwell and Kathryn Cramer look at the broad appeal of space opera and trace its origins back to the early twentieth century. The genre name traces its origins back to a derogatory term for terrible pulp stories, though it, and the genre itself, has evolved over time into something quite a bit more positive.

Each novel reviewed is the start of a new trilogy or series, each taking place in a massive universe that recalls some of the greats: fans of C.J. Cherryh or Lois McMaster Bujold will probably find quite a bit to like here, and if you’re a reader who really likes spaceships, rogues in space, and plenty of action, you’ll find a lot to like here. 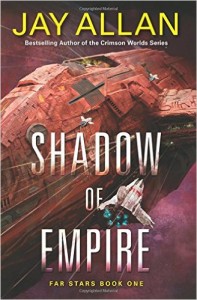 Shadow of Empire follows Arkarin Blackhawk and the crew of his ship, The Wolf’s Claw. When we first meet him, he’s been arrested and sentenced to death in a gladiator pit: Only the daring actions of his crew save the day, escaping deep into space before hyperdrive problems force them to land on a planet consumed in war, and he is soon tasked with helping save the daughter of a friend.

Overall, Shadow of Empire is a quick, entertaining read: Allan writes with an engaging style from the get-go, and jumps right into action from the start. The first couple of chapters are an excellent case study in structure for this sort of book: Details come rapid-fire, and in no time at all, we’re introduced to Blackhawk’s situation, his crew, the ship he’s on, and before you know it, they’ve completed a daring rescue and are on to their next adventure. This book reminded me quite a bit of older pulp stories, where masculine heroes go out into the universe and go on adventures: It’s not pushing boundaries by any stretch of the imagination, but it will provide your dose of nostalgia. 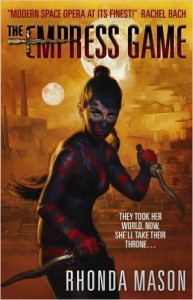 The next adventure, The Empress Game, is the first of a trilogy, and was probably my favorite book of these four, evoking pulp authors such as C.L. Moore or Leigh Brackett. In this adventure, Kayla Reinumon is approached and recruited by a member of the Imperial Diplomatic Corps, Malkor Rua, to take part in the Empress Game, a trial by combat to fill a seat on the Sakien Empire’s Council of Seven. The Empire is strained, and Kayla discovers how treacherous the imperial court can be as she works to fight her way to the top.

Of all the books here, I had the most fun reading Kayla’s. She’s an impressive character, with a conflicted history and responsibilities to tend to as she’s drawn into an intergalactic conflict. Mason has injected this book with a nice level of complexity in the universe, and there’s an exciting mix that elevates this book above a one-note series of adventures. 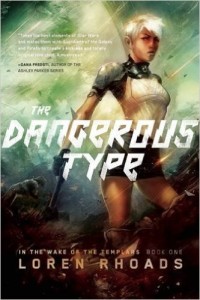 Like Shadow of Empire, Loren Rhodes’ novel The Dangerous Type drops you right into the middle of a much larger story. A quarter-century after a galaxy-wide war, an assassin, Raena, has been freed from a catacomb, putting her on the trail of the man who had enslaved her and turned her into a killer in the first place.

While Rhodes drops the reader right into the action, this story doesn’t work as well as Allan’s. From the beginning, I felt like I was asking far too many questions—like about some of the scenarios, such as how Raena not only survived for two decades locked away in a catacomb, but apparently suffered no ill effects from her imprisonment. While questions are answered throughout the book, this and the pacing of the book was enough to jar me out of the story on more than one occasion. 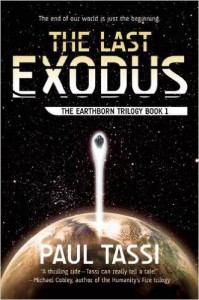 Finally, Paul Tassi’s The Last Exodus is really the only book that deals with planet Earth in any capacity. Attacked by an invading alien armada, Earth has been ruined: stripped of natural resources, with survivors struggling to survive on dwindling supplies. One survivor, Lucas, comes across an alien ship, where he discovers a traitorous member of the invading alien race, along with Asha, a woman whom Lucas had crossed paths with in an earlier encounter. This unlikely group of characters has to figure out how to escape from the dying planet.

Of the four books here, I felt like Tassi’s was the most enjoyable overall: His prose is clean, visual, and straightforward, and it’s a novel that’ll certainly appeal to fans of shows such as AMC’s Falling Skies or SyFy’s Defiance. It’s an interesting mash-up of science fiction tropes, both post-apocalyptic and first encounter, and Tassi walks the reader along with a trio of characters who are interesting throughout. Furthermore, like Allan’s book, it’s well structured from the start: Tassi has a good idea for hooking his reader, and it’s very effective.

What do these books tell us in aggregate? They’re well designed, despite the individual flaws. Tassi, Rhodes, Mason, and Allan are working with big worlds: galaxy-spanning civilizations that defy the conventional physics. The characters are all active: They’re mercenaries, assassins, aspiring politicians, and survivors in hard worlds that test each of them.

Furthermore, I read these books with an eye towards how the authors opened their books and carried them through. When you talk to anyone about seeing Star Wars for the first time, the answers inevitably begin with the description of that incredible Imperial Star Destroyer flying overhead. It feels like there’s an unwritten rule for space opera stories: You don’t need to start at the beginning; the story is just a small part of a much larger universe.

If there’s any takeaway from these four books, it’s that they’re just a small sliver of these larger worlds, leaving plenty of space not only for the remaining books in their respective series (remember, these are all the first installment of a trilogy each), but also for more stories set far in the galaxy.

I don’t think that these books will carry the critical weight of something like the Ancillary series, and I’m not sure that I had as much fun reading them as Becky Chambers’ Long Way To A Small, Silent Planet (well, The Empress Game, maybe!), but there is real value in settling for a fun, engaging, and familiar story. With these four books, you’ll get that and more.