So the dog lives. We only really see the dog for a couple of minutes, but still, I wanted to get that out of the way up front. The dog lives.

A few years ago I had a chance to rewatch a bunch of the old G.I. Joe cartoons from the 1980s. It was one of my favorite shows ever back in the day, the inspiration for some of my first fanfic writing (no, I haven’t posted it), and I’ve since come to realize that the cartoon was a way for me to come to terms with my father’s military career and its impact on my life. (When the cartoon first aired, Dad was stationed at Grand Forks AFB, where he commanded a B-52 crew. His job was to fly to Russia and drop nukes when Reagan pushed the button. In hindsight, this was a little stressful. But the Joes always came home in one piece, right? It made me feel a little better. I was around twelve at the time.) Watching it more recently, I was struck by something astonishing: The cartoon never mentions nuclear bombs. The threat of nuclear annihilation is totally off the table. In fact, the Joes became friends with their Soviet counterparts, because Cobra was a threat to both countries and they had to work together to stop it. This was amazing. I was explaining this to a friend, that there were no nukes in the G.I. Joe cartoon, like, at all, and she asked, “Then what was there?” What was the big terrible weapon the bad guys used to terrify us?

Answer: The Weather Dominator. Because of course, right? (There were other weapons of unlikely chaos: the Mass Device, the McGuffin Device (I am totally not making that up), that ray gun that turned Iceberg into a killer whale (I am totally not making that up either).) With the Weather Dominator, Cobra could control the weather all over the world, causing snow in Egypt and the ice caps to melt, thereby disrupting the entire geopolitical system in preparation for taking over the world.

So imagine my utter delight when I saw the trailer for Geostorm, with its system of malfunctioning weather-control satellites. This movie has recycled a thirty-year old plot device from my favorite cartoon. Wonderful. When the heroes of Geostorm discover that the malfunctioning weather control satellites aren’t malfunctioning but are being sabotaged, and when it becomes clear that the mastermind behind the sabotage is a high-ranking U.S. government official bent on disrupting the entire geopolitical system in preparation for taking over the world . . . Oh my word, I swooned. This was just like an episode of G.I. Joe but without the Joes and Cobra. Which makes it a terrible G.I. Joe episode, but still.

This is the kind of movie where the earnest computer analyst phones one of our heroes, tells him he’s figured it all out and can he meet him to pass along the info, and is then horribly murdered literally seconds before the meeting. This is the kind of movie where Ed Harris appears and you think, “Oh, I bet he’s the villain,” and you will absolutely be right. Toward the end, the massive space station that controls all the weather satellites is in the process of self-destructing, so control of the satellites is transferred to a NASA ground station and you think, “Wait a minute, could you do that the entire time? Why did everyone have to go to the station then? What?” Seriously though, there’s some pretty awesome space porn here: Apparently, in just a couple of years, a coalition of nations was able to build a massive space station with a crew of hundreds and vast manufacturing capabilities to construct thousands of satellites and distribute them all over the planet. This movie is almost space opera. (Two people even get sucked out into the vacuum!) Also, it’s the kind of movie that would have us believe it isn’t really about weather control satellites and saving the world, it’s about our heroes, estranged brothers Jake and Max, learning that they really do care about each other and hugging it out at the end. Because the screenwriter read somewhere that the audience needs to have an emotional connection to the characters. Voila.

The screenwriter and director is Dean Devlin, who has made a career out of mindless stupid disaster movies, including both Independence Day films, the ’98 Godzilla, and a handful of others. But Geostorm is different. Geostorm has a message: Climate change is bad, and only by uniting the nations of Earth and building an outrageously complex system of space stations, satellites, and a fleet of new space shuttles to service to them, will humanity triumph. Or something like that.

While the issue of anthropogenic climate change has come to be a hot-button political topic in the U.S.—will admitting its existence make you unelectable in certain districts? —Hollywood has been aware of and using speculation about the consequences of climate change for quite a long time now. Starting with, dare I say it, 1995’s Waterworld, in which melted polar ice caps have completely submerged every single landmass on Earth. Never mind that there isn’t enough water for this to actually happen, we’re entering the land of metaphor and moral parable, not realism.

Turns out we can go back earlier, at least to 1989’s Slipstream, a surprisingly great SF flick starring Mark Hamill and Bill Paxton. Here, an unspecified disaster has caused the planet’s weather patterns to shift and expanded the jet stream until the entire planet is covered with deadly winds. There are airships. It’s kind of amazing.

I’m interested in how movies handle climate change as a vector of disaster. I’m interested in what movies about climate-change-as-disaster say about culture, entertainment, and what we’re afraid of. In the ’50s and ’60s, hundreds of movies about radioactive giant critters rampaging across the land clearly revealed a pervasive societal fear during the first decades of the atomic age. Now, we’re seeing the actual real effects of climate-driven disaster. So what do the movies have to say about it? Turns out, given the magnitude of the issue, there haven’t been all that many disaster films about climate change. It may be a little too real.

The prologue at the start of Geostorm, in which a young girl’s voiceover explains the terrible storms and weather ravaging the planet in 2019 along with all the relevant real news footage, was uncomfortable after this past disastrous summer full of floods, hurricanes, mudslides, and wildfires all over the world. It drew a straight line between actual, real disasters in which actual, real people are killed, to the mining of those disasters and accompanying images as entertainment. I believe Geostorm’s explicitly stated message—that humanity will have to unite to combat climate change—is made in earnest. But who is going to listen to a goofy Gerard Butler action vehicle sporting a ten percent rating on Rotten Tomatoes?

Geostorm surprised me a little bit in one way. The trailers led me to believe the technology itself would be the villain—this cure for climate change, however unlikely, would be worse than the disease. One recent film, Snowpiercer, did that, depicting a world plunged into permanent, freezing winter by a misguided attempt to thwart global warming. (I thought Snowpiercer was overhyped and problematic, a potentially intriguing metaphor stomped to the ground with repetitive action and a lack of understanding of what its own metaphor actually was.) In Geostorm, science and scientists are not the villains, and that was a relief. Amoral politicians and their cronies are, and, well—I don’t suppose I can really argue with that, can I?

The biggest hurdle so many of these movies face is their own complete lack of scientific accuracy. Because real climate and real weather don’t act that way. The instant deep freeze depicted both here and in 2004’s The Day After Tomorrow (which I thought was also Devlin but turns out was actually written and directed by Devlin’s Independence Day partner in film-crime, Roland Emmerich. Hollywood’s disaster film dynamic duo.), the instant tidal waves, the ability to measure the start of flaming heat waves to the second—don’t happen in real life. We’re shown many disaster film staple images of innocent people fleeing for their lives—from wind. From cold. From heat. In the real world, you can’t really escape these things, and they creep up so slowly as to hardly feel like disasters until you’re in the middle of them, until people are already dying. Fleeing a real-life hurricane involves sitting in a traffic jam on the freeway. By necessity, movies have to make these events bigger, faster, more spectacular, more compelling—and escapable. Survivable. Geostorm needs there to be an actual ticking clock (I counted three in the climactic scene: the space station’s destruct mechanism, the clocking ticking down the approaching geostorm catastrophe, and the upload bar for the reboot order. Three ticking countdown clocks at once, people!!!) so that we know how much time we have before it’s too late to stop the weather from killing us. And it wants there to be a switch to flip to make that happen. If only confronting climate change could be that simple.

In what may be an image of supreme symbolism or wish fulfillment, either intentional or accidental, I can’t really decide which, the key code to reboot the satellites, thereby undoing the sabotage and saving everything, turns out to be biometrically linked to the U.S. President’s own fingerprints and retinal scan. Part of the plot involves Max kidnapping the President (with the help of his über-competent Secret Service girlfriend, who for some unfathomable reason just goes along with everything he says) and convincing him that the threat is real and that he must act.

From the mouths of mindless stupid disaster flicks, amirite? 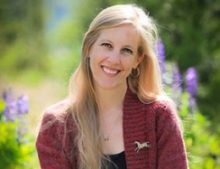 Carrie Vaughn’s work includes the Philip K. Dick Award winning novel Bannerless, the New York Times Bestselling Kitty Norville urban fantasy series, and over twenty novels and upwards of 100 short stories, two of which have been finalists for the Hugo Award. Her most recent work includes a Kitty spin-off collection, The Immortal Conquistador, and a pair of novellas about Robin Hood’s children, The Ghosts of Sherwood and The Heirs of Locksley. She’s a contributor to the Wild Cards series of shared world superhero books edited by George R. R. Martin and a graduate of the Odyssey Fantasy Writing Workshop. An Air Force brat, she survived her nomadic childhood and managed to put down roots in Boulder, Colorado. Visit her at www.carrievaughn.com.