The Myth of Everyman

Editor’s Note: In this issue, we ran an interview with Noah director Darren Aronofsky. Between the time the interview was conducted and its appearance in the online edition of Lightspeed, Noah’s screenwriter, Ari Handel, did an interview with Christian website The High Calling in which he offered up some problematic rationales for why the entire cast of the film was white. We found his response troubling, and felt as if we could not in good conscience publish the interview without addressing Handel’s comments in some way. As such, we recruited Sofia Samatar to write us a brief essay in response, which we present to you here. —John Joseph Adams

The abovementioned interview with Noah co-writer Ari Handel recently drew attention for the way Handel answered a question about race. Asked why the entire cast of the film is white, the co-writer replied:

From the beginning, we were concerned about casting, the issue of race. What we realized is that this story is functioning at the level of myth, and as a mythical story, the race of the individuals doesn’t matter. They’re supposed to be stand-ins for all people. Either you end up with a Benetton ad or the crew of the Starship Enterprise. You either try to put everything in there, which just calls attention to it, or you just say, “Let’s make that not a factor, because we’re trying to deal with everyman.”

Handel’s response is offensive, yes. It’s also useful, because it illustrates how privilege works. Privilege works by remaining invisible. It “doesn’t matter.” It doesn’t “call attention” to itself. It’s “not a factor.”

What we’re looking at here is the power of the neutral position: the right to stand in for all people, to be “everyman.” From the neutral position, you can experience the whole range of human emotion and possibility, and you can communicate your experience to others. You’re the myth-maker; you create the story of the world. In implying that only white actors can do this, Handel’s saying the opposite of what he thinks he’s saying. He’s saying that the race of the individuals does matter. It matters enormously. It matters so much that Noah wound up with an all-white cast.

What happens if you make space for actors of color? Handel’s comparisons—a Benetton ad or the crew of the Starship Enterprise—are instructive. They suggest that putting white people and people of color in the same space is sort of ridiculous, and motivated by vulgar material concerns. Benetton, after all, is just trying to sell clothes. The diverse crew of the Enterprise—depending on whom you ask—represents either a deliberate expression of progressive politics, or part of a marketing strategy by NBC. Money, politics, the messiness of contemporary life—this isn’t the high plane of the story of Noah, the level of myth. Myth is neutral, spiritual, transcendent, and, for Handel, white; people of color are stuck in their time and place, stuck to the material world.

But Everyman is a myth—a myth both in the sense of “traditional story” and in the sense of “lie.” All people are mired in the material, stuck to their time and place, and all people have the power to create and embody stories that extend beyond their particular circumstances. In this sense, Ari Handel is right. The race of a given individual doesn’t matter; nobody has a neutral body. But it matters when we pretend that some of us do, and when we allow only those people to stand in for all of us. Exclusion, not inclusion, makes race a factor. 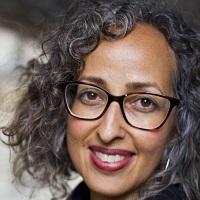 Sofia Samatar is the author of the novels A Stranger in Olondria and The Winged Histories, the short story collection, Tender, and Monster Portraits, a collaboration with her brother, the artist Del Samatar. She is the recipient of the William L. Crawford Award, the Astounding Award for Best New Writer, the British Fantasy Award, and the World Fantasy Award. She teaches Arabic literature, African literature, and speculative fiction at James Madison University.