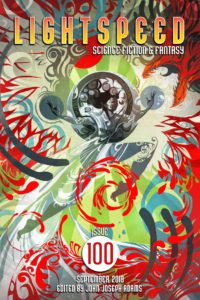 LIGHTSPEED #1 was launched in June 2010, and now eight years later, we've reached a milestone: Issue 100. To celebrate, we're publishing a super-sized issue, with ten original stories--more than twice the amount of original fiction than usual--plus ten reprints and some special nonfiction to boot. And to make things even more commemorative, the vast majority of our fiction in this issue, both original and reprint, comes from our most frequently published fiction contributors: the LIGHTSPEEDiest writers to ever LIGHTSPEED. It's a distillation of what we're made of, and we're beyond excited to share it with all of you.

Our cover art this month comes from Hugo award-winning artist (and fifty-three-time LIGHTSPEED illustrator) Galen Dara, illustrating new science fiction from Vylar Kaftan: "Her Monster, Whom She Loved." We also have new SF from Carrie Vaughn ("Harry and Marlowe and the Secret of Ahomana"), Adam-Troy Castro ("The Last to Matter"), Ken Liu ("The Explainer"), and Sofia Samatar ("Hard Mary"), plus reprints from A. Merc Rustad ("How to Become a Robot in 12 Easy Steps"), Charles Yu ("NPC"), Caroline M. Yoachim ("Stone Wall Truth"), An Owomoyela ("Travelling Into Nothing"), Seanan McGuire ("Frontier ABCs: The Life and Times of Charity Smith, Schoolteacher"), and David Barr Kirtley ("They Go Bump").

On the fantasy side of the ledger, we're featuring new work from Maria Dahvana Headley ("You Pretend Like You Never Met Me, and I'll Pretend Like I Never Met You"), Cadwell Turnbull ("Jump"), Genevieve Valentine ("Abandonware"), Sam J. Miller ("Conspicuous Plumage"), and Kat Howard ("A Brief Guide to the Seeking of Ghosts"), plus we have reprints from Yoon Ha Lee ("The Coin of Heart's Desire"), Theodora Goss ("Elena's Egg"), Charlie Jane Anders ("The Super Ultra Duchess of Fedora Forest"), and Jeremiah Tolbert ("The Girl with Sun in Her Head").

We've also got an array of nonfiction features, including a special celebration of our contributors' and staff members' favorite LIGHTSPEED stories of all-time, and then our novel excerpt this month is from Gene Doucette's THE SPACESHIP NEXT DOOR.