Everything we crocodiles taste in the water has meaning. It tells us about the people who live here: who does the washing, who harvests the water crops, what they are growing in their fields and belukar. We even know littler details: who is pregnant, who is dying, what couple has been frolicking in the river, heedless of the risks we pose to them.

We do not often live near human villages; humans are delicious, but they also like to hunt us. We like the human towns even less, which taste of the lack of care they have for each other.

So when I went looking for Si Tenggang, I breathed the air shallowly and kept my mouth shut as I traversed the river that ran by the city he lived in. But one hears many things on the riverbanks, especially when one knows how to hide under the rushes.

“Si Tenggang is a powerful man,” I heard one woman say to her friend as they washed the day’s laundry. “He traveled overseas to the shores of Siam, and brought home gold enough to cover an ark as tribute to the Sultan.”

“Did he marry the Sultan’s daughter?” her friend asked.

“No, but he married a distant cousin, and eats at the Sultan’s palace every full moon.”

“Si Tenggang is a shrewd man,” a man drinking arak slurred to a group of drunk men, the alcohol irritating my nose. “He began with just one ship, and now has a whole fleet of them. Every venture of his turns a profit. He was the first to trade with the British, and helped the Sultan broker the deal for guns.”

“Have you ever fired a gun?” one of his friends asked.

“I have, and it sounds like thunder, and can kill a deer from two hundred paces.”

At this, I shrank back a little under the ledge on which they sat, where the soil still clung to the roots of the meranti tree they sat under.

Soon I found that Si Tenggang lived right by the river, and was wont to sit in a little wakaf built right over the riverbank, smoking tobacco from Persia by himself. Itinerant storytellers would audition for him then, for the chance of entertaining his growing family and many visiting royal relatives. I sat under his wakaf for several nights, listening to the storytellers, to determine how best to tell my story to him.

When I was ready, I waited until one evening when he was alone, and the household asleep, to come out. As I approached the steps of the wakaf, I rose and stood on two legs.

He was startled, but I said, “Ampun tuanku, my name is Senang, and I bring you stories, and news of your mother.”

His eyes widened a little, and he looked around to see if anyone was nearby. Then he sighed, “I hope the neighbours buried her.”

“And how do you know my mother? You don’t look familiar to me, although you seem to be my age. Did you move to the village, and take my place? Ah, but they needed all the young men they could get, for their old ways.” He sounded halfway between regretful and amused.

“I have a story for you, tuan, if you’d like to hear it. I hear you like stories, and this one is from the village we came from.”

He brightened at the change of topic. “By all means,” he replied, settling down onto the floor cushions. He gestured for me to take the few more steps up onto his wakaf.

I told him this story:

“Many years ago, an old woman lost her only grandchild to the crocodiles that lived in the nearby river. She wept tears by the riverbank every day in mourning of her grandchild, who was her only family left, as her son had left to seek his fortune, leaving behind, unbeknownst, a pregnant lover who died in childbirth.

“One day, a crocodile swam up to her, and whispered, ‘Grandmother, our headman has a request of you. His grandchild has swallowed a large bone, and it is choking him. No one in the tribe can reach it, but your human hands could. I know you have little love for us, but could you help?’ So hearing, the old woman agreed, and she sat on the back of the messenger, who took her to the crook of the river where all the crocodiles watched over the young one.

“When she arrived, the crocodile headman greeted her, ‘Old woman, my own grandchild has swallowed a bone too large for his throat whilst eating. I will offer you what I can if you would help.’ The old woman asked, ‘Is it the bone of my grandchild that yours is choking on?’ And the crocodile replied, with a moment’s hesitation, yes. And the old woman asked, ‘If I do this for you, will you promise to leave this river forever?’ And the crocodile replied, with only a moment’s hesitation, yes.

“So the old woman bade the young one approach and open its jaws. She reached in and pulled out a gently curving rib caught in the youngster’s throat. The crocodiles thrashed the water with joy, and the headman said, ‘We will keep our promise. There are other rivers, and other prey. We shall never return here again, unless you require it. My messenger will bear you back safely, with all our thanks.’

“Thus was the river forever free of crocodiles after that.”

He looked at me, bemused, and said, “I have all the lore of my village, but I had never heard that story before.”

“It was after your time. Had you remained longer when you returned, had you chosen to once again take your place by your mother’s side and become part of the people you forsook, you would have heard it. It would have been unavoidable, for the river where this happened was the river that runs by the house you left behind.”

It was hard to resist moralizing, but his reaction was worth it. A sneer appeared on his lips then, and I saw his fist curl. “The hovel, you mean! The food we were never allowed to finish on our own without some men intruding on our meals! The dirt, the filth, the squalor! Why would I want to return to all that, when I have this?” He gestured to his house, a grand building in the distance beyond a copse of flowering saga trees.

“When I returned home,” he continued, spitting out the last word, “it was to a place of superstition and unbending time that refused to make way for progress. When I returned home, with my ship full of riches and my books full of knowledge, it was to elders who stared at me and said nothing, but I saw they judged me lacking. I! Who could countenance that the prodigy of a son would return home so scorned?”

He stood and wagged his finger threateningly at me. “And here I am now, rich beyond my dreams, and you expect me to have given all that up! No, not even for my beloved mother, even if it meant killing her.”

I did not move; my obligation held me in place. Besides, he did not know what I was. “You did. That day you returned.”

“You walked past her as if she did not exist; you did not see her when you turned from the elders, too wrapped up at their rejection of your arrogance to see her open arms, her soft cries of joy that you had come home.”

His mouth, open from outrage, now shut. He narrowed his eyes at me.

“I wasn’t there,” I said, “but she told me afterward. I would have wept, but my kind don’t have tears.” When he said nothing, I continued, “Your name was on her lips the day she died.”

“Have you brought a curse from her? I don’t believe in curses, mind you,” he scoffed.

“She loved you too well to curse you.”

Was that a glint of conscience in his eye then? He was troubled a moment, as if he finally felt the guilt that a son who had abandoned his mother should feel. Or perhaps he just did not believe me.

“Get out,” he hissed through his teeth.

I did not move. “I have another story for you. I think you will like this one better.”

“Fine, another fairytale, and then you leave!”

I nodded, and began:

“This is how the story of the old woman really ends.

“After her faithless son returned, she took the long slow walk, aided by fellow villagers bringing her the happy news, to the village center where he was conferring with the headman.

“He was now tall and fair, and wore rich clothes. He held his trousers up when he walked, as if he could not bear to soil the hem, and every so often waved his fan, as if his nose was too delicate for the common smells of cows and donkeys, of paddy fields and grass.

“As she held her arms out to him, he walked past her, not seeing her, back to the men who bore his carriage from the capital where he lived. It appears he did not even think to visit his poor old mother, alone and waiting so long for his return.

“She wept at the riverbank when no one was near, and continued to live the end of her days the best she could. Surely you remember she wove baskets.”

“We tasted her tears as they traveled to where we now live, two rivers away. We knew the salt immediately, recognized it from when we had first taken her grandchild.

“I asked my grandfather for permission to leave the tribe, and swam up the two rivers to where we had once lived years ago. I followed the trail of her tears, and met her on the riverbank.

“She scolded me gently, saying she had not called for us. I was not called, I said, but I wished to know her misery.

“When she told me, I said to her, ‘Grandmother, let me take the place of the grandchild I ate and the son who has abandoned you. It is the least I can do for your mercy.’

“And so I stayed with her until the end of her days. When she died, I bore the news to the village, and helped bury her.

I saw the blood drain from his face, and I smiled a little.

“Si Tenggang, do you recognize your sin? Though we crocodiles are reputed to be faithless, we, too, know the Prophet’s hadiths.”

He began to shout, but I knocked him over, falling onto my natural four legs. I heard him call for his mother as my jaws clamped down on his head. 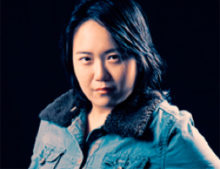 Jaymee Goh is a writer of fiction, poetry, and academese. She is currently a PhD Candidate at the University of California, Riverside where she is affiliated with Science Fiction and Technoculture Studies and Southeast Asia: Text, Ritual and Performance. Her work has been published in Expanded Horizons, Stone Telling, and Crossed Genres. She is an editor of The Sea is Ours: Tales of Steampunk Southeast Asia (Rosarium Publishing). She has written on racialized and postcolonial steampunk for the WisCon Chronicles (Aqueduct Press), co-written an essay on steampunk fashion and race for Fashion Talks (SUNY Press), and contributed to Tor.com, Racialicious.com, the Apex Book Company Blog, Beyond Victoriana.com, and Steampunk III: Revolution (Tachyon Publications). She tweets a lot: @jhameia.