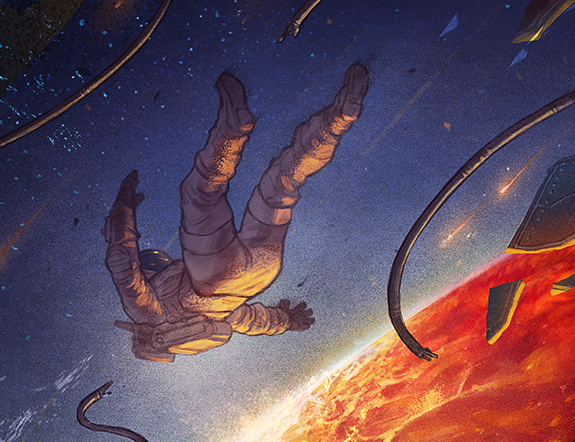 Didn’t talk much during the daily vidcalls, brown eyes peering out from beneath his shaggy black hair, floating every which way in zee-g. Supposed to keep it short, but company regs don’t apply. Not anymore.

His kids were on Croia Hab. Partner too. Three of thousands, now just clouds of matter joining all the other debris.

Nuke came outwell, Jaurez went inwell. Set his crawler to max cycle, max vent, sold his soul to Newton and pushed the button. One way trip, no ticket back.

Falling, falling, sticks and stones, break my bones, nukes will never stop me. They didn’t stop Jaurez. Ground did that. Or maybe it was the atmosphere.

Used to watch vids on the old wars in school. Tanks racing across rocky ground, squads with matte black rifles, soundless drones dropping the reaper’s scythe. Gleaming electronics on sleek missiles, atmospheric lasers, the aesthetic art of death changing just as surely as any other fashion. Supposed to warn us, keep us from our heritage. Classmates thought it looked like fun, like a game.

Sanitary violence, actions divorced from their grime, their blood, their cost.

Corps thought they had a monopoly on that violence, up here in orbit. Thought their shiny toys were enough to break from the rock down below. Thought their nanospun suits and self-sustained ecofarms and sheer distance would keep them safe, that their actions wouldn’t have consequence.

The pebble’s lament—nobody ever thinks they’re the one to start the slide.

Nobody ever thinks they’re pushing the button.

How do wars start? Same way wars always start. Someone wants something from someone else. Water, food, land, people—all the same. Just a thing to be taken from things to be killed. No isn’t an answer.

Governments wanted their power; saw the habs, and the crawlers, and the farms; saw lives being lived away from their grasp. Saw the structure changing, and they weren’t invited. No wasn’t an answer.

Corps saw a rock dragging them down, sucking profits inwell they didn’t want to lose, and costs they didn’t want to acknowledge. No one pulls themselves outwell by their bootstraps, but they thought they did. Once they got there, just another frontier to exploit. Refused to pay taxes anymore. The rich always do.

Sold it to the habs as freedom. Independence. No wasn’t an answer.

Everything happened the same way it always does.

Doesn’t matter. Everyone ends up in the dirt.

No one wins a war fought with rocks.

A beep. Vidcall coming through. First one in . . . don’t know. Used to be daily. Lost track of the days.

Lost track of a lot of things.

Make myself push the button. Huh. Fang is the only one left. Hasn’t been on in a while. And me, I guess. Why do I even bother? Easier to fall. Whole life spent falling, through school, through jobs, through love, through space. Never brave enough to accept the final plunge of commitment, never cowardly enough to take the terminal impact of death. Ended up stuck in zee-g, crawling this endlessly falling rock to pay my debts. What’s one more descent?

Words cut the air, voice like a rich vein of iron—hard, strong, sure. Good building material, iron. Habs used it. Used to use it, before the nukes.

“Where are the others? I just got my comms back up.”

Eyes a blue so black you could sink in them and never find your way out. Comet ice. Habs used to use that, too.

“No. EMP from when they hit Dehlia Hab fried most of my sensors. All I could do to jury rig a comm. Was hoping to get telemetry from everyone else.”

Clouded words, like the clouds swirling across the planet below. Used to be azure and jade, now it’s mostly grey. Angry clouds. Rock clouds. Dirty rain falling, killing ground and sun, radiation ripping through the sky and stars. Everything falling.

Red rage, the rosy bloom of rocks crashing home. Of nukes clawing out, screaming through atoms until vacuum silences their frenzied roar. So much red.

Something new in the comms. Cold, slithering, an airlock seal about to fail.

“We’re the only ones left.”

Not a question. I answer anyway.

“Pretty sure. Habs are gone. Rocks all fell. No calls up here anymore, no lights down there.”

Forced dispassion. A doctor triaging something terminal, two hours breathing required and only one hour of oxygen for EVA. The calm calamity of crisis.

I have to ask.

“Are you gonna fall too?”

“Am I . . . ? No. What the hell’s the point? I just said the planet’s dead. Took a week for us to make this mess, and it’ll take centuries for the temperature to stabilize. If it ever does. Corps are dead, govs are dead, plants and animals are dead, everything’s dead except us, and you don’t even talk half the time . . . ”

Silence, brittle, sharp. Knife-edged spurs on a treacherous rock, eager to flip a crawler into their depths, down below comm range. Trapped forever, if the company doesn’t notice. Supposed to notice, company reg Seven Three Dash E, but sometimes they don’t. Sometimes someone falls and no one remembers to care.

My voice surprises me, a pocket of platinum where scanners indicated copper. I’m not sure I meant to say anything, but I did, and here we are. Drops of water gather in eye corners, then shake free, tiny planetoids drifting serenely. They sparkle in the starlight.

Habs used to sparkle like that, when the sun came over the edge, like plankton in the abyss. One of my only memories of life before, an aquarium vid gifted on a child’s birthday, saved all these years. Specks of life where nothing should exist.

“Yes. These crawlers can convert ice to usable water, shape metals and rock—that’s why they had us out here in the first place. Orbital infrastructure. So we could finally get off the planet before something killed us.”

Rueful laughter, a streaking meteorite that makes you jump, only it’s a firefly landing on your nose in the hab park and you accidently crushed it with a clumsy hand.

“I’m going to Mars. Plenty of ice there. There’s enough food in the crawler to make it with the recyclers, and more than enough ice on my stroid. I can cycle some to set velocity, then burrow inside for shielding and wait. I’ll get there eventually.”

Hands fly into motion, a sense of purpose, building something from nothing. Steel bars from rock bones, the skeleton of a hab, or a house, or a home, filling it with life and love amidst the emptiness.

The briefest hitch imaginable, that tiny instant before the circuit closes and the radiation expands.

No one’s lucky. Not anymore. No one left to be lucky.

“Because what else is there to do? Sit here and wait to die? Bombard an already murdered world? At least this way I’ll get to walk on Mars before I go.”

A pregnant pause, eyes looking everywhere but the screen.

“You could come too, you know. Help me see. Try and start something new, away from all. . . this.”

My fingers finish moving. They’ve been moving the whole time, crafting a solution. Max cycle, max vent, join all the others. Fall in. End the uncertainty. The appealing finality of the void.

Another course appears on my plot, transferred over the comm. A quick rotation, then steady vent at quarter power for several days. Burrow, and wait—a long fall out. Maybe forever. A fall that might never end. Can I survive it? After everything that’s happened?

Two choices hover in front of me.

What is there worth living for?

A beep. Another rock falls today, slowly at first, but gradually picking up speed. Miniscule compared to the dying rock behind it, a mote of nothing in the uncaring universe’s eye in front. It will never make it, not against the titanic forces it faces, blind and alone, racing to another hostile rock where it will shatter and perish. Never.

I close my eyes, push the button and fall. 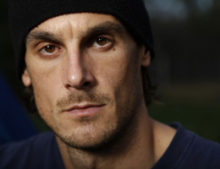