Kamaria turns into a helicopter gunship at the full metal moon. She stalks the fallow killing fields by night, chop-chop lost in the wind. Helicopter thoughts are slick with oil, but she will not fire her guns. That much she holds in place, like a single sputtering candle underneath the roar of her blades.

Transformation scenes are off-camera. We don’t have the budget. Jump cut to:

At dawn she wakes up naked and heavy on the beach where after the war they burned all the bodies and denied their existence. There are nobodies there now, watching her.

She shakes the ash from her blades and clambers to her feet, gravid with unfired magazines. Now she has to walk all the way home with her hands clasped under her belly, hoping to reach home before the sun gets too hot.

Zoom out to an extreme long shot centred on the thin brown comma of a lone woman: We see a pleasant tropical landscape. Sparkling blue water, palm trees, all the scattered nobodies and the churning of the secret charnel soil, all the ashes mixed with sand.

We cannot film the nobodies. To the camera, as to the naked eye, they are nothing but twists in the air like heat haze. We are uncertain whether they are the ghosts of those who died in the war. This is the only answer anybody will give us, but we suspect most of our viewers will not believe in ghosts. We don’t dwell on the possibility. They can no longer affect the material world, or least not much beyond dreams and words and a light breeze.

The nobodies harry Kamaria all the way home. She ignores them. They are only pockmarks on the skin of the world, there to signify that something has been survived. It is impossible to tell now which side of the war they might once have been on. Being chased by them in their masses is like being caught in a stiff wind. We focus on her, the only vital figure in this landscape, her hair blowing about her face despite the air being still and warm. We hope to depict them in our documentary if only through the perturbations they cause in her arc.

When Kamaria gets home, her husband Wielan is folding again. He is a compulsive folder. She sits by him and watches him fold paper money. He layers notes over themselves into the shapes of little animals. A boar, a bull. Nothing that flies, not for another cycle. Last night’s paper birds hang from the clothesline, held in place by their crooked necks. They jangle and bob with the passing of the nobodies.

“Will you put some clothes on?” Wielan says, after a while. “What will the neighbours think?”

He does not look at the cameras. Unlike Kamaria, Wielan has never got used to the cameras. We know he’s talking about us, and we make faces at him.

“We don’t have any more neighbours,” Kamaria says. She’s tired, and she stopped seeing us long ago. “Only nobodies.”

Wielan no longer asks after the child in her belly. From interviews, we have gathered that he was once excited, when they first realized she was pregnant so long ago. But then there was the first post-war full moon. And then another, and another, and as the months became years he folded the child’s name away so thoroughly even Kamaria can’t remember it any more.

It is lost to us, which is frustrating because names are important to the story we’re trying to tell, and there are so few of them.

Nothing important happens until the next cold moon. We can cut this part down to a montage. They fight, they cry, they make up, they fight off a midnight invasion of nobodies that tousles their hair and upsets their crockery. Slow fade to:

“Gibbous is a funny word,” Kamaria says to Wielan.

They’re out in the yard waiting for the moon to rise. Kamaria has undressed already, letting Wielan fold her clothes away, and taken up her spot far enough away from anything that might be destroyed when her tail boom snaps from her fuselage and her blades whip out so fast and deadly. Wielan lost three fingers once because he had her face cupped in his hand when the moon rose.

Every time the change comes over her, Kamaria’s last human thought is that next time she and Wielan will speak of it, discuss the wherefores, make plans. Was she infected because she was bitten by a helicopter during the war? Will their daughter inherit the curse if it is not broken before she is born? Will she have a compulsion to fold? So much to talk about.

She has told us these things in interviews, and we suspect there are many other things that she wants to say to him that she kept to herself, even then.

But the two of them never talk about those things because the other phases of the moon pass in the exhaustion of respite. The half-moons, the new moon, the crescents like sickles, they all skip past like a stone over water. We have been following them a very long time, and we have come to the understanding that their story will either end badly or it will not end at all. We cannot prompt a climax, and so must await it.

Flashback, sepia-toned: Wielan did say something once, just after he lost his fingers. When Kamaria came back the next morning, she found him folding and refolding a bloody cloth around the stumps, weeping with the pain.

“You have to fire your guns,” Wielan said, folding and weeping. “That’s the only way. You pass it on like it was passed on to you.”

“You can’t shoot nobodies,” Kamaria said, and she thought about that all month, round and round, helicopter thoughts slick with worry.

We depict this period of her meditations with a fast-forward strobe of the lunar cycle. The moon looks like a disc thrown across the sky, sickly and spinning.

“We would like to see you verbalize your process a little more,” we tell Kamaria. “Your struggle to not perpetuate the cycle of violence. What are you thinking?”

“Shush, nobodies,” Kamaria says. Lately, that’s the only thing she says to us.

We don’t really have any cameras. We’re not stupid, we know that. Even the dead have their affectations, if we are the dead. But then, after all, we are cameras, because we are nothing but perspectives. We have no meat. We remember nothing of ourselves, if we ever had selves of our own. We are the world regarding itself, hungry for somebody’s narrative, anybody’s narrative. And maybe we are the dead.

Sometimes we wish Kamaria would shoot us. We are not sure what would happen, but it would break the tension. We are taut, and whenever we cannot take it any more, we fall on them like rain, pulling at them, until they beat us away.

Wielan folds paper money into birds only in the full moon afternoons. It’s his way of wishing her luck. Kamaria is outside, practicing her helicopter thoughts. Wielan still won’t look at us, but he tells us that it’s all our fault.

He says we are holding the world caught in this endless post-war moment, making it impossible for the living to move on and find peace. That our sheer invisible mass has folded time and space upon itself. That this world is a bubble. Or perhaps he is saying that he folded this world over us, to contain us, but he didn’t mean to be trapped in here with us. Wielan contradicts himself often, his truths bent in on themselves.

“How?” we ask. We imagine seeking out a master generator for the bubble, something protected by paper boars and bulls, strung with wires that paper birds dangle from. We imagine destroying it, leaking into the world.

“If she would just shoot you,” Wielan says. “Then the bubble will pop. I think so. Yes. It’s your fault.”

He does not mention his daughter.

We look for hope in his eyes, but all we see are red veins. This is because we never let Wielan sleep. Every night, we tug at his hair, pinch his brows, haunt his dreams. Wielan does not tell Kamaria about these torments. He is suspicious of us and what we might still be capable of.

Slow dolly in: Kamaria’s guns. Pan across their potency, their frustrated chastity, until the helicopter moves away from us.

The helicopter always moves away from us, as if she is fleeing. We chase her, always. We seek resolution, when we remember to want it. But most of the time we follow her because we have no narrative of our own. We are nobodies, and we are waiting for her to decide.

Pull back to see the crowding nobodies below, our not-arms raised with what might be fear or repudiation or yearning. We have no eyes or cameras apart from our attention, but under the full moon we are always focused on the candle that isn’t sitting in front of her rotor, the flame guttering in her wind but still lit, still somehow lit. 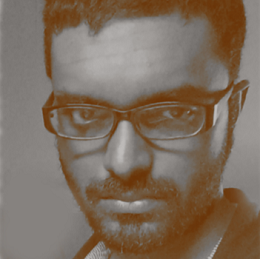 Vajra Chandrasekera lives in Colombo, Sri Lanka. His short fiction has appeared in Apex, Clarkesword and Shimmer, among others. You can follow him on Twitter at @_vajra or find more stories at vajra.me.