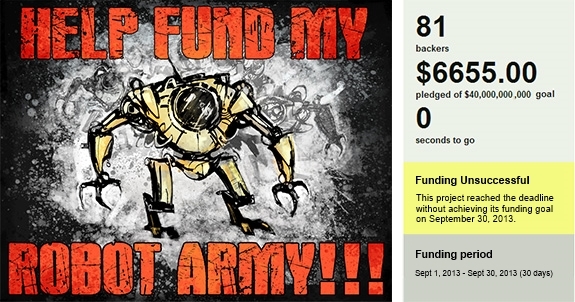 HELP FUND MY ROBOT ARMY so I can crush your hopes and dreams by making my own come true!

As late as ten years ago, a mad scientist with a dream could expect to turn a decent profit with his lesser inventions and build enough capital to put his (or her!) real plans into play.

Those days are sadly over, although my father, fool that he was, claimed that they never existed. You knew him as Doctor Cetaceaux, at least up until last year, when his orca henchmen, fed-up with being paid in inferior tuna, turned on him. Oh, how he screamed as they tossed him around like a stringy, bony seal . . . but that’s neither here nor there. He claimed that he and my mother were quite poor back in the day, and that it has always been difficult for new talent to get a start. NONSENSE! Absolute nonsense—why, when he was young, a handcrafted reverse-aging ray might make an enterprising scientist enough money to live comfortably in an abandoned Alpine castle for several years. Now, such items are mass-produced by Beauticience Incorporated for a pittance.

I have been obsessed (moderately!) with robots from a very young age. According to my mother—who you would know as Doctor Electronautía—I was “accidentally” left in an android servicing center overnight at the tender age of four, and ever since that day I have been utterly uninterested in having any friends with disgusting, oozing, fleshy bodies. And why should I? Human children are squalling animals with no sense of style and no appreciation for genius. Their parents, of course, are worse.

The field of robotics is full of hacks, engineers with no creative impulse. Scientists who wouldn’t know ambition if it hit them in the face with a laser cannon. Well! I have spent the past twenty years designing my robot army—no machine out of place—to take over the world for my own nefarious purposes.

I have no doubt that you are wondering what I will do if—ah, though it is not “if” so much as “when”!—I surpass my initial funding goals. My stretch goals include a squad of “Steam Punk” robots, including gears, parasols, and gold inlay; a domed city to house survivors, surrounded by a moat complete with robot sharks to keep them safe; and a collection of plush versions of my most popular robot models.

You may be wondering why you should fund my creation of a robot army! I think that if you have this question it shows that you are thinking about everything all wrong! Consider this: What if I am unsuccessful and the next supergenius decides to make a robot army and is not so cheerful, friendly, and gracious as I am?

MY HEARTFELT THANKS. After I have taken over the world and repopulated most of it with my robotic creations, I will have your name written down somewhere.

YOU WILL BE SPARED. (Probably.)

YOU AND YOUR THREE CLOSEST FRIENDS WILL BE SPARED. (Probably.)

RADIOACTIVE COOKIES! I will bake them, test them on several lab rats for suitable potency, and then ship at least a dozen right to your door. NOTE: To save on costs, they will be shipped as media mail and may take some time to reach you.

BECOME A ROBOT FOR A DAY! I will use the funds from this project to find a way to upload human intelligences. You can spend your last happy day on Earth inside the robot of your choice before I return you to your inferior body and what remains of your miserable life.

PERMANENT NEURAL UPLOAD. The future looks grim for humanity’s survivors! Even if enough people are willing to pledge $50 apiece that the species will survive, it will be a hard life of gardening, fending off wild animals, robot attacks, and terrible hygiene. With this reward, you will thrive in a new body. For an additional $5,000 pledge, I will even allow you to choose your design.

CO-CONSPIRATOR! Together we will rule the world with iron fists, at least until I tire of you, at which point I suppose we’ll end up as arch enemies and do battle across the scarred surface of the planet. It should be fun while it lasts. In order to make our harmonious co-habitation more feasible, I have built bunk beds.

Clearly, the only major risks associated with this project involve what will happen if you choose not to fund it. However, I do appreciate your concern for my well-being. In general, I have experienced very little personal damage while building robots. Occasionally errors by my human staff have caused them to suffer from burns, radiation sickness, missing fingers, missing eyes, missing limbs, and paper cuts.

I do not anticipate any aspect of this project will prove truly challenging, as I have never failed to achieve my goals.

This is going to fail the same way (and for the same reasons) as the clone army project that imploded a few months back.

Don’t you think you should start with something smaller? Like, maybe just ONE killer robot, instead of an entire army of them?

I don’t understand why we had to sit through a memoir just to find out what he wants money for.

This is completely subverting the purpose of this website, asshole. The point of crowdfunding isn’t so that the super rich can enslave the masses, it’s so that people who aren’t independently wealthy can fund their projects! NOBODY FUND THIS. IT IS A SCAM.

How will I spend the money?

I thought that this would be obvious, but apparently you people need me to spell it out for you. R.O.B.O.T. A.R.M.Y.

I am not opposed to criticism, no matter what you brain-dead malcontents might think. As a result, I have added some new reward tiers for those of you who think that being spared is NOT worth $50. (Oh, and won’t you be SORRY in a few months). The new tiers are as follows:

AN 8X10 GLOSSY PHOTOGRAPH OF THE ROBOT OF YOUR CHOICE CRUSHING THE SKULL OF YOUR WORST ENEMY. UNLESS your enemy has already pledged $50, in which case you have the option of choosing your second worst enemy. NOTE: If you have not also pledged $50 to be spared, I will instruct my Death Bots to allow at least 10 minutes for appreciation of your backer reward prior to your inevitable death. Please add $15 for international shipping.

CHOOSE A LANDMARK TO BE DESTROYED. Is there a building or monument that you find to be in particularly bad taste? With this reward, you will be allowed to direct one demolition. Restrictions: None of my current or future holdings are included in the list of eligible landmarks, nor is the World’s Largest Rubber Stamp for reasons that should need no explanation.

FIRST CHOICE OF NEW LIVING QUARTERS. While you can potentially survive the destruction of all you hold dear for far less money, mere survival is unlikely to be any fun! At this reward tier, you will be first in line for a choice of premium living cubes within my domed city. Make your friends jealous!

BECOME A ROBOT TECHNICIAN. While the rest of your friends and family are sitting around unemployed and bemoaning their fates, you will have a full time job maintaining my robot army.

IN ADDITION: All tiers above the $50 mark will now include the $50 reward and I will spare your life.

This is not a scam!

Apparently, the owner of this website has been receiving complaints from the populace. The complaints, as far as I can tell based on several open letters, are simply that I am tricking innocent people into giving me money.

I assure you! This is no scam! It is the best way to ensure that you will survive the next ten years. Or months, depending on how quickly I’m able to move beyond the prototype stage. Simply because you do not wish to purchase additional months or years of life does not mean that you should prevent others from doing so!

It is absolutely ridiculous to claim that this is a scam! People are funding me of their own free will, and I assure you they will be satisfied with the results!

I am tired of being held back by petulant whiners with no drive to achieve their own goals. I will succeed! None of you can stop me now!

Dear lovely backers! As you may have noticed, we are currently four days away from my deadline and have so far only raised a paltry $6,655. This is less than 0.000017% of my funding goal! I currently have access to your email addresses, which I can use to triangulate your location due to nefarious sciency techniques that I will not divulge in this missive. It is absolutely essential to your continued existence that you fund this project.

I have released several short documents on Twitter. I urge you to retweet them, especially if you happen to know someone famous.

I knew that it would be difficult to be recognized as the genius I am, but I did not think that my work would be SO disregarded!

Clearly not one of you understands my works of staggering genius! You would rather fund an entire run of tiny kitten Jacuzzis, but robots? The future? THE TRUE FUTURE, THE ONLY FUTURE OF HUMANITY? NO! NOTHING!

But I shall have the last laugh! I will build this army regardless, and when I return oh, how you will RUE the day you failed to contribute!

You have not heard the last of Doctor Crushamous!

Keffy R. M. Kehrli is a science fiction and fantasy writer currently living in Seattle. Although his degrees are in physics and linguistics, he spends most of his time in a basement performing molecular biology experiments for fun and profit. In 2008, he attended Clarion UCSD where he learned that, unfortunately, rattlesnakes don’t always rattle. His short fiction has appeared in publications such as Apex Magazine, Fantasy, and Escape Pod, among others. He is also an editor and slush reader for Shimmer magazine.