Alexandria Stephens knew she was going to die a slow, cold death in space. She floated fifteen meters from her capsule, a single-pilot maintenance shuttle that could operate in low- or high-Earth orbit.

Construction expenses for single-operator vehicles offered all kinds of economic advantages, especially considering the slender profit margins for satellite or orbital-platform contracts. Moon shuttles required two-to-six member crews, but market forces made smaller transports the only viable option for near-Earth missions. Alexandria’s vehicle was durable and maintained by Glen Michaels, an old-school aerospace mechanic whom she trusted like a brother, though Alexandria often double-checked his work while they drank beer and argued about emerging technologies. They both understood that the ship was everything; if trouble developed, shuttle pilots were more than inconvenienced.

But the occasional death of a pilot did not deter the corporate suits. Number-crunching lawyers and actuaries demonstrated that Space Jockeys, Inc., could lose a shuttle and pilot every eighteen months and still turn a profit — including replacement costs, death benefits, and liability payments. They were still serious about safety, and the actual twenty-year average loss rate was one worker per thirty-two point three months, which included a three-man crew that crashed last year on approach to the Eagle Monument construction site at Tranquility Base. But company officials were more serious about the bottom line.

Alexandria understood the dangers when she signed her flight contract, and she would have enlisted at half the pay and twice the risk. Alex had dreamed of becoming a commercial pilot since age eight and had been with Space Jockeys for seven and a half years, earning a reputation as one of the brightest and fastest technicians on duty — twice turning down supervisory positions to continue fieldwork.

“Even in space,” she confided, “pencil pushing is not my style.”

She was John Wayne on horseback, riding from satellites to telescopes to orbital lasers. At shift’s end, she knew exactly how much range had been covered and how many thoroughbreds had been corralled. She loved it, but now she was dying, a flesh-and-blood meteoroid midway from her shuttle and a geosynchronous satellite that was humming again thanks to a new circuit panel she’d installed in seventy-one minutes flat.

There were forty-five minutes of life support left in her suit, and the rescue ship Sibert, like the Carpathia, would arrive too late. The Sibert’s mission would be body recovery.

Alexandria’s motion held steady, spinning back to front about once per minute and approaching the shuttle at negligible speed, slightly off course. But even if she were on course, her air would run dry before she reached the vehicle. And after the O2 tanks emptied, the heating units would shut down and her body would solid up fast in the minus 240-degree shadow of Earth. She could see the lights of her ship, a soft glow from the nuclear powered satellite, and millions of stars. The deep emptiness of the Pacific Ocean was framed by glowing cities.

Strangely, the lights comforted her even if they could not save her. She needed propulsion from her mobility pack, a damned near infallible piece of equipment with multiple safeguards that had been knocked dead by a pea-sized meteoroid that also cut her forward motion, set her rotating, and disabled her means back to the lifepod that should already be returning her to base. As a result, Alexandria was no longer an astronaut, no longer an $835,000 corporate investment; she was orbital debris to be cleared away when the Sibert arrived. Her shuttle was fifteen meters distant, but it might as well be halfway to Andromeda. The meteoroid would have been more merciful had it bulls-eyed her helmet instead of mobility unit. A quick, unaware death.

Now, there was no way to alter her forward motion or rotation, which, as it turned out, was the only enjoyable part of this mess. As she waited for life-support to end, at least she would have a 360-degree view. Alexandria was an optimist, confident to an almost infinite degree, but she was also a physicist. Reality existed. Space was unforgiving. And her future prospects were zero.

Thirty minutes later, still drifting and trying to enjoy the galactic view, Alexandria realized that she had been an idiot, allowing half an hour to slip by without grasping the possibility of life. She and the physical universe were intimate friends, and such friends do not go gently into the night.

A thick Velcro strap held an old-style, standard-issue Jockey Watch around her suit at the left wrist. She pulled the lash as tight possible, pulled until she feared the band would break though it was rated for 750-degree temperature swings and 1,500 pounds of tensile strength. She refastened the Velcro, trusting the strap to maintain suit pressure.

Then, without hesitation, she unhinged her left glove. The cold vacuum of space stabbed her naked skin. She screamed inside her suit from pain but held firmly onto the glove she had just removed. Everything depended on that hunk of layered fabric and aluminized polymers; Alexandria only hoped it had sufficient mass to nudge her toward the ship — and she had already wasted thirty minutes floating like a cabbage. Of course, her throw must be hard and precise; then she must latch onto the ship with one hand if she got there.

“Probably easier to sink one from mid-court,” she thought, “but I’ll take the shot.”

The pain stopped after her hand froze solid, and Alexandria could focus her thoughts again. She waited until the spin positioned her facing the satellite. Then, offering a prayer to Isaac Newton, she hurled the glove underhanded with the same control she used on the pitcher’s mound at Princeton, throwing from the center of her body and aiming dead at the satellite. If her trajectory were correct, the counterforce of a space-glove fastball should propel her toward the shuttle.

There was some good news. Her suit seemed to be holding pressure at the watchband; she veered more or less in the desired direction; and her body rotation increased to only once every thirty seconds. The bad news. She was still traveling too slowly and her track would just miss the shuttle. But Alexandria was no longer a vegetable. There were eleven minutes to solve the problems.

She allowed three minutes for observation and recalculation of the necessary course change. Then, without hesitation, without overthinking, she grabbed her frozen left hand and snapped it off like an icicle. Then she hurled it awkwardly over her head and left shoulder.

Alexandria’s counterclockwise rotation slowed, though she was now spinning gradually feet over head, and it took a few minutes to confirm that she on target toward the beautiful, warm, oxygenated Anthem. The only questions were: Would she arrive before her suit ran out of O2? Could she snag the shuttle with one hand and a frozen stump? Would the wristband hold pressure while she maneuvered inside?

Alexandria focused on her goal with each gyration. She counted off meters per minute and tried to slow her breathing. She calculated the moment when she must thrust for a handhold.

“Hey, Georgie Boy. You didn’t think I was going down without a fight? Cancel the distress call, and tell Doc there’s prosthetic work headed his way. My left hand’s an orbiting ice ball. Over.”

George liked Alexandria. Never lost or damaged a ship in her career, and she could change a control panel before most techs found the right screwdriver.

“What do you mean?!” said George. “You tell us the jig is up and then shut down communications. Are you in the shuttle? Over.”

“All cozied up. Inflated a tourniquet around my forearm and am about dose myself with Morphinex-D, the all-purpose pain killer, sedative, and antibiotic for today’s space traveler. The ship’s on auto return and docking because I’ll soon be in Happy Land, but I expect the doc to have me mission-ready in four weeks. And if Old Man Jones thinks I’m paying for suit repair on this job, he’ll look worse than my mobility pack when I’m done with him. Over.”

“While we’re on that subject,” said George, “folks around the control room are pretty upset. You phone home, tell us you’re gonna die, and then shut down the intercom. Not very nice, Alex. Not one bit. Over.”

“Sorry, George. Didn’t want anyone to hear me crying if I broke down. I would’ve had to kill you if that happened, so forgive me. I’ll buy the beer as soon as I can hold a mug, and tell Jones to pay bonuses to our watch designers. I’d like to kiss them all. Over and out.” 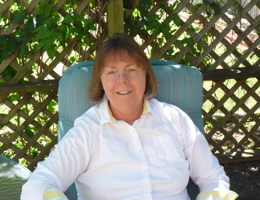 Claudine Griggs is the Writing Center Director at Rhode Island College, and her publications include three nonfiction books about transsexuals along with a couple dozen articles on writing, teaching, and other topics.  She has also recently begun writing fiction, publishing three stories, and hopes to draft more science fiction, her first-love genre as a teenager.  Griggs earned her BA and MA in English at California State Polytechnic University, Pomona.