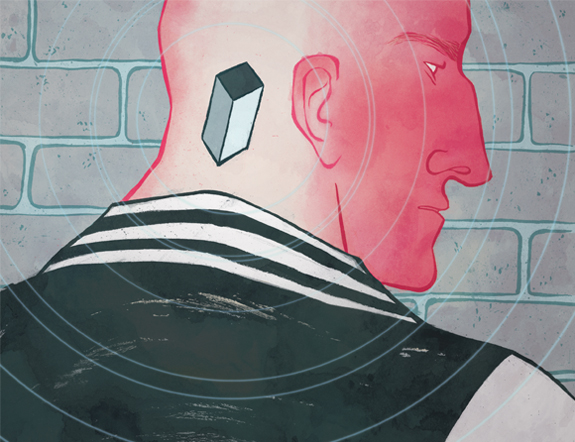 Gramophone music crackles out over the quad.

I raise my voice. “‘They’ has been used as a singular pronoun since Chaucer: whoso fyndeth hym —” A champagne cork pops, the drinkers cheer. I can’t compete. “Oh, for goodness’ sake.”

“You don’t approve?” asks the Prof.

“This college isn’t a theme park.”

“True. But it survives in the present partly by preserving traditions. Financially, I mean.” She leans back in her leather captain’s chair by her mahogany desk. She has a point. “Take lectures: the printing press made them irrelevant; the Internet makes them ludicrous. But the students expect them.”

“At least you can learn from lectures. What can you learn from balls?” Or from rowing? Or from wearing tweed and riding a tandem?

After my tutorial, I wander out into the quad. Flooded with sunlight, set in aspic.

Striding towards me is Petheridge, pink and massive. Fresh from competing on the river, or possibly from a portal that has transported him ninety years through time. I shrink into a doorway. Ninety years ago I wouldn’t have been at this college at all, cluttering the quad with my breasts, my bespoke pronouns, and my socialist leanings.

On a collision course with Petheridge marches Morley, a weasely chap in black. Morley could easily be Petheridge’s nemesis. Morley loves his gleaming white neuroscience lab, just up the road, and chafes at the tweedy tandem riders. He plays elaborate pranks on them, which is a perverse revenge, because antiquarians love pranking.

To my surprise, Morley flings his arm round Petheridge’s shoulders (as far as he can get it). I didn’t think they were friends. Morley wouldn’t see the need for rowing, a pre-industrial form of propulsion to satisfy a neolithic display of strength.

“Bugger off, Morley, old chap,” snarls Petheridge, displaying the antiquarian’s idiolect. He ploughs forwards, pretty much lifting Morley off his feet. “Fuck off, Morley! Don’t be a bloody [slur1]!”

I can’t tell if Petheridge adopts these outdated terms deliberately, or if his school and his family never set them aside. “Get your [slur1] hands off me, you bloody [slur2].”

I perform a quick genuflection to the idea of latency: maybe Petheridge is as queer as I am. Maybe he’s had the whole rowing team and feels terrible about it, and that’s why he uses these words. But I feel my chest tighten. “Ah! Ouch! [slur3]!”

I imagine transcribing him, annotating him, giving him a scathing pseudonym in an academic journal article.

Morley drops to the ground, at last. Petheridge strides out of sight, and Morley limps towards me, grinning. “Got him!”

“Got him? He was wearing you like a satchel.”

“I’ve got him in here. I’ve recorded fifteen words, and I’ve stolen at least four of them.” He slumps onto a bench.

“What?” I sit down as well because my heart is pounding. It’s infuriating to be so shaken by insults not even directed at me.

“I place my fabulous invention like so . . .” Morley shoves the box at my face, and I duck away. He holds it to the base of his own skull instead. “I record the brain activity during various utterances. Then: zip! I take out those particular words. Numb those neurons.”

“Jay. Which of us knows more about brains?”

“It makes no sense. If you’d studied linguistics — ow.” He’s swooped in, pressed the box to my exposed neck. I feel a sharp nip on my spine.

“What were you saying?”

“That’s not how language works.”

“And what’s the study of language called?” He smirks.

It’s on the tip of my tongue, the dark of the moon, the back of beyond. The word’s gone.

“Ha! Swiped it out of your tiny, doubting head.”

My heart redoubles. “You’ve taken the word for what I study. What I want to study for years.”

“Oh, don’t get huffy. It wears off. Like pins and needles.”

I picture delicate webs — of language, of neurons — torn and fluttering. “You arsehole.”

“I thought you’d be grateful! It’s the moral arc of the universe, Jay! Now Petheridge can’t call you a [slur1].”

He’s wielding the discourse of social justice, but it’s clumsy, like a man fending off a bear with a deckchair. I walk unsteadily away from him. I reach for the word as I go, and don’t find it.

I still don’t believe in the pearly grey box. It must be a hypnotist’s trick.

I stay up late. Every half hour, I try to say it. My mind scrabbles around like a hand at the bottom of an empty bag. At four in the morning, suddenly, the word is there again. “Linguistics,” I say aloud, and fall asleep.

In the morning, on the stairs, I meet two women on their way back from a ball. They’re wearing flapper frocks, hugging, and stumbling. Petheridge pushes past them. “Mind out, you bloody —”

He reaches for a slur and it isn’t there. His face gets stuck at the apex of a yawn. He closes his mouth and scowls. The women laugh.

His brain hasn’t been washed. The concept he wants is still there. The hateful threads are flapping in the breeze, trying to knit themselves together again.

But this means that Morley’s box truly works. So I have to report it.

I knock on Professor Norris’ door, and unpack my heart. Is this a free speech issue? Is it about moral justice? I’m trying to make a difficult decision: should I tell someone?

“Oh, I’ll do that,” the Professor says. “I’ll take it to the Dean right away; it sounds like criminal assault.” She notices my crestfallen post-heroic sulk. “We can talk about it later. For now, just do something relaxing. Go to a ball, Jay!”

A week later, as instructed, I enter a marquee on the college lawns. A rumour passes around the punch bowl: Morley has been sent down from college. He’s sworn he’ll take his genius to America. White boys in black tie mutter: what’s old Morley done? I don’t stick my oar into the debate.

Petheridge wanders over in the half-light. “Hello there.” He stares at his shoes.

He could be queer, I thought. It would make a neat ending.

“The Dean wouldn’t say who dobbed Morley in, but it was you, wasn’t it?”

“Thanks for that. You’re all right.”

Then he lurches towards me. Someone has cannoned into his back — another face grimaces over Petherbridge’s shoulder, like he’s sprouted a second head. Petheridge yells in pain, shouts for his friends to help him, a roll-call of posh names: “Thom! Jasper! Oi! Amelia!”

The attacker is Morley, and I seize him round the knees. Lacking strength or skill I simply slump, until we both fall onto the muddy ground.

I sit and watch sturdy men from campus security take Morley away.

A floral dress stands over me. “You’re covered in mud.”

Petheridge helps me up and gestures at the floral woman. “This is . . . my fiancée.” He nods at me. “This is Jay, they’re studying — is it English?”

“Linguistics.” Light-headed from the fight, I’m touched by Petheridge bothering to use the right pronoun.

“I’ll get you both some towels,” his fiancée offers, competent in a crisis.

“Thanks —” The exaggerated yawn freezes him again. “Thanks, darling.”

I realise Morley has taken one last word from Petheridge. Still, it won’t last forever.

Now I’ve been away from college for twenty years, I don’t judge the antiquarians so harshly. I should have punted more, and danced. I wish I’d made notes on their mangled slang.

I don’t tell anyone about my experience with that prototype brain-number. Years of linguistic research still suggest to me that words don’t work that way. But Morley did devise an electrical treatment for aphasia (in the States, as he’d threatened).

I don’t tell anyone I knew Petheridge, who may become Prime Minister. He’s forsworn using [slur3] and [slur4] in his speeches, but his dog-whistle phrases carry the same messages.

I feel a queasy sympathy for him, because Morley’s little box has robbed him. He always credits Amelia’s support, is always affectionate: “my dear wife,” he says, and “my beloved wife.” Sometimes, playfully, “Mrs. Petheridge.” You wouldn’t notice the tic unless you were looking for it.

He must have said it once. After all, they did get married. Although interviews reveal to me that they eloped to a private ceremony on a Scottish island.

I picture the two of them in a tiny stone chapel. At Petheridge’s first attempt, his face halts in a long yawn. He stops. The second time, he slowly recites a phonetic chain of syllables, sounds which approximate to the name of his wife. 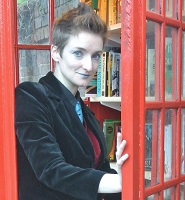 E. Saxey is a bi Londoner of no particular gender. Having dabbled in queer theory, and then wandered sideways into pedagogy, E. Saxey now works in universities, helping staff to teach in interesting ways. Previous short stories have appeared in Daily Science Fiction, Apex Magazine, The Future Fire, Expanded Horizons and in the anthology The Lowest Heaven (Jurassic London).