You ask how my brother died on the moon that day, but that’s the wrong question. Ask instead what he spelled with his bootprints when we first stepped down from the platform. Ask instead the one song he listened to, the whole flight there. Ask why he wanted me there instead of Jess, his wife.

It’s because we used to pretend the backyard at night was the moon. That we were astronauts. That gravity was different.

On the moon you can breathe in deep, moments after your brother’s died, and you can feel your heart unmoor in your chest a little, and rise up into your throat.

What he spelled with his bootprints was Mom.

What he listened to—you could guess it. Your first guess is almost definitely right. The song leaked from his earbuds the whole way up. I was sick of it. I sang it back to him as tonelessly as I could, trying to sour him on it. He just smiled.

He didn’t know what was coming for him.

The paperwork we’d signed had explained the threat, had provided a diagram of how it could happen to anyone. How space isn’t empty. How important our personal little atmospheres were going to be for the duration of our thirty-minute walk in the prescribed area.

When I looked back to Danny the instant after it happened, it wasn’t because I had a sense of anything wrong. It was because I’d walked the ten steps out I needed to, to get a picture of him with the Earth not just in the background, but cupped in his hands. It was going to take a few tries, but we had thirty minutes to get it right.

We thought we had thirty minutes.

When I turned back around to Danny, he was looking down at his chest exactly as if ketchup had just dripped from a sloppy burger onto his best shirt. His hands were out to the side, palms in, white-gloved fingers spread in surprise, and insult.

We had patches in the palms of our gloves for this, had watched the video, done the training.

I leaped to him. That’s the proper word for how you get across to your brother in one-sixth gravity, when his suit has just been punctured.

“Where where where?” I screamed into my helmet, into his ears.

You can’t see a pinhole in times of stress. I rubbed my hands together in a circular motion until my palms heated, and then I slammed them both down over his chest.

The patches deployed, gripping so tight they pulled the outer shell of the suit inward. From right above where my two thumbs made a steeple, a tiny gout of already-freezing blood geysered out, riding the suit’s pressured-up, now-escaping atmosphere.

The training had all been about sealing the suit, sealing the suit. There hadn’t been anything about what a speck of dust that could penetrate that suit might do to a sternum, or everything behind that wall of bone.

I held my hand over the hole all the same.

Our face shields were knocking together now. They’re supposed to be functionally unbreakable. They’re what our whole suits should have been made from.

I was screaming his name here, I guess, and then I was pulling his own hands up, for more patches, but his had already been triggered by the depressurization or something. His palms were gritty with moon dust. With what he’d been telling me for weeks was regolith.

Danny convulsed for the first time then, so I did what any brother would do in this situation. I held the heel of my hand over the hole in his chest, and then my knee, and when he was still dying, still bucking and jerking like drowning, I reached back into our childhood for the corduroy beanbag he used to read comic books in after school, that had enough bulk it would have to cover this hole, and then I grabbed some of his comic books as well, stuffed them in as well, with both hands, who cares if I was bending them, and when his whole body shook again I reached even further back, for the piano my mom used to play before dinner on Fridays, and I pushed it in, and then I just started pulling whatever I could: the killer whale action figure we’d fought over on his eighth birthday, the football we always signed ourselves each summer, the gross thermos our dad kept his gross coffee in for work, the ancient cassette tape organizer I’d left him when I went to college, the puffy jacket he’d cut an extra pocket into for emergency sandwiches, the single power cable we’d had to charge both our laptops with, and, last, when it was the only thing I could find, our dog Boxer Boy’s dull silver tag, that Danny gave to me when I moved out, finally admitting that it hadn’t been lost.

It was just the right size, was flat and everything.

Danny’s right hand was wrapped around my wrist.

It let go, and it kept letting go.

The response team hauled me away from him hard enough that they nearly lost me to all the empty space yawning open behind us. That’s what it felt like.

On the trampoline in the backyard when we were kids, this feeling is exactly what we’d had to . . . not fake, but imagine: all the missing gravity, our steps large and exaggerated, our arms out to the side like we didn’t have control of them.

My helmet was full of the response team’s orders and apologies and assurances and questions.

I pulled against them, wheeled around for the Earth one last time.

Somewhere down there two kids were lying in the grass, I knew, looking across all this impossible distance. One of them was explaining to the other how the moon’s rotation and its orbit take the same time, meaning the same side of the moon is always looking down.

One of those brothers already knows the magic word for moon dirt.

He intones it like a secret, like a promise, like a spell that can take him there if he says it just right, and, two hundred and thirty-nine thousand miles above him, I reach out to hold his small blue planet between my thumb and index finger, to stop their world from spinning so fast toward all this. To let those two kids stay there just a moment more.

You ask how my brother died on the moon.

He just fell asleep on the trampoline again. He just needs me to tug on his sleeve until he wakes, so we can make our way back into the house. 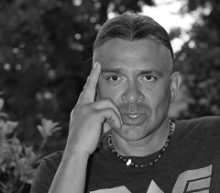 Stephen Graham Jones is the NYT bestselling author of nearly thirty novels and collections, and there’s some novellas and comic books in there as well. Most recent is My Heart is a Chainsaw. Next are Earthdivers and Don’t Fear the Reaper. Stephen lives and teaches in Boulder, Colorado.