The lights speak to me as they flash red, red, red. They’re saying wait, wait, wait, then ready as yellow flashes, then get the fuck going as greens turns the sky into a maelstrom of steel and fire and I’m rising, pushed into the back of my navpod so hard I fear I’ll break through.

The first three seconds are the most dangerous, the powers of heaven and earth look away as a hundred ships fight for the same small stretch of sky. Stats say ten seconds is safest, just hunkering on the launchpad and waiting for the screaming mess to clear before punching up into the race. Ten seconds, which wouldn’t be much considering, except that no one waits, especially not me and I’m dodging faster than thought and rising, rising, until a flash of fire in front of me opens the pale green of the planet’s atmos to me and I punch a burn, laughing at the poor fucks caught in the wake as Dido shudders and bolts forward.

The navpod is screaming at me after a few seconds, though, and I have to throttle back and sift the feeds Dido is bombarding me with. Destruction in five minutes, she’s telling me, the Interplanetary Defense forces very proper and efficient when dealing with threats like the one below. Five minutes and it’s dust, along with any of the unlucky pilots who aren’t offworld by then.

A Zephyr 220 cruises beside me, the thin frame anemic next to Dido, a converted Rathford Boxer that looks almost like a flying brick. I can feel the mocking sneer on the pilot’s mouth as they start to pull ahead, trying to catch me in their wake, stall my engines, which in this race is as good as fragging me from the sky. And the Zephyr’s fast, faster than any Boxer has the right to be, but Dido’s so far from what she was that it’s the other pilot’s damned fault for not guessing she has more mods than a Onceman Killdrone. Just as the Zephyr pulls ahead, I hit a burn hot and high and so close to the Zephyr’s top that I clip its nav array and it’s spiraling down and lost to the waves. Well, rubbing is racing.

We pass the first checkpoint in a mass, but most are keeping their distance now. Aside from duels and gang-ups, most are turning their attention to the map that pops up now that we’re clear of the confusion of the start. Still fifty ships flying, more than enough, and I eye the course, which will take us first over a large city. After that it’s another checkpoint to get to the next leg.

Dido starts pinging warnings from scans of the ground net, and I see the feed as defense systems are tripped. Probably never thought they’d see an alien, and now the race was drawing up doomsday scenarios like we’re the ones to fear and not the ID globe-buster still cloaked in orbit. Unlucky fucking planet has been deemed biologically threatening. Not because it has nukes or weapons but because of some shit growing so deep in the ocean no one on the surface probably knows it exists. But scans and projections say it could do irreparable harm, so the race is here.

No one really knew who started it. Records just don’t exist. Probably they’re long dead now. Life projections are three races if you’re talented. Even the best only do four, maybe five, and then retire or die or get locked up. Highly illegal, what we do, but who cares about contact protocol when the whole place is going up in minutes?

It’s my fourth race. Everyone tells me I should retire, hit a beach somewhere and let it all go. Take my boyfriend or girlfriend or whoever I’m with and find a quiet place to live out my years. As if anyone has ever been real competition for Dido. I know what’s waiting for me, and it’s not the soft sounds of water licking the shore.

Whatever planetary systems we tripped, Dido warns me about the wall of rockets before I actually see them. Staggered, but not nuclear, the natives are testing us out I guess. Probably confused as fuck that we seem to be killing each other. Probably wondering what kind of invasion would lose over half its force before reaching shore. Poor fucks. But the thrill isn’t just the race to the finish. It’s the proximity to extinction, to the powers of the universe. What rush can compete with annihilation on this scale?

Four minutes now and the rockets reach the first line of ships, who start weaving between them, getting real close like they’re hot shit and I can tell by the way the rockets don’t track that it’s a dumb move. I’m not the only one who sees it, though, not the only one to pull up and over as the rockets explode as one, taking a dozen ships down and out of the race. Not bad for primitives, timing the things, not relying on the rockets actually hitting anything. At this speed, shrapnel is all they need, but now that we’re wise things go faster.

Three minutes and the ID ship uncloaks as it drifts down from its orbit to come nearer the surface. Dido floods me with messages and warnings and reports of activity on the surface as tactics are changing. All at once we’re forgotten as the whole world must be getting a good look at the barrel of their destruction. Which means it’s time for the next stage of the race, and I burn as fast as Dido can handle into the city, scanning rooftops of buildings for signs of life.

It brings back memories, seeing them all standing there, faces watching the sky. I can remember the feeling of everything changing, seeing the ships flying overhead. Somewhere in the building below my father was screaming at me, telling me to come down, to be safe, but who cares about being safe when the world is ending. Not that I knew it was. I just wanted to see the ships. Spaceships. At sixteen years old I thought they were the best things ever, like maybe I had been living my life, afraid and stressed and bruised, always waiting for those ships. For the universe to tell me that the whole planet was wrong for being fucked up and backwards and I, I was for the stars.

Scans pick up the stats I’m looking for and I drop, Dido initiating landing almost before I ask her to. Biological readings are clean and normal. Size indicates an adolescent, but the pictures tells me all I need to know. It’s her eyes, wide and staring, the way she doesn’t flinch when the hatch opens. I can see the faint traces of a bruise almost healed on her cheek, on her neck. Two minutes and fuck, was it really like this for me? Did I just stare as the hand reached out, as I heard the question, which was somehow in my language?

“You want out of here?” I ask the kid, standing there like she’s just won the universe. I guess she has. I don’t tell her it’s to save her life. I don’t tell her even if she gets offworld she’ll be classed as criminal without having committed any crimes. That can come later. I just hold out my hand, and she takes it, and then we’re back in Dido and making for the next checkpoint. 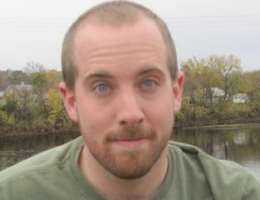 Charles Payseur is an avid reader, writer, and reviewer of all things speculative. His fiction and poetry have appeared at Strange Horizons, Lightspeed Magazine, The Book Smugglers, and many more. He runs Quick Sip Reviews, contributes as short fiction specialist at Nerds of a Feather, Flock Together, and can be found drunkenly reviewing Goosebumps on his Patreon. You can find him gushing about short fiction (and occasionally his cats) on Twitter as @ClowderofTwo