Moments after the sun’s bottom lip cleared the horizon, the brigade charged down the hill. Kima stood with the rest of the Garfun, ready to give back blow for blow.

The pistoleers descended towards the waiting village compong. Their silence unnerved. Only the paddy thump of the camels’ wide feet made any sound. Compong people murmured, stepped back. But Mother Letty gestured to the Garfuns defending them to stand still. So they did. Kima felt her palm slippery on her sharpened hoe.

The pistoleers advanced upon them in five rows; some tens of impeccably uniformed men and women posting up and down in unison on their camels. Each row but the last comprised seven gangly camels, each camel ridden by a soldier, each soldier kitted out a la zouave, in identical and pristine red-and-navy with clean white shirts. Near on four muskets for each of them, and powder, carried by a small boy running beside each camel. There were only twelve muskets in the compong.

Now the first rows of camels stepped onto the pitch road that led into the village. The road was easily wide enough for seven camels across. The cool morning sun had not yet made the surface of the pitch sticky. The camels didn’t even break stride. Kima made a noise of dismay. Where was the strong science that the three witches had promised them? Weeks and weeks they’d had them carting reeking black pitch from the deep sink of it that lay in the gully, re-warming it on fires, mixing it with stones and spreading it into this road that led from nowhere to the entrance of the compong, and stopped abruptly there. Had they done nothing but create a smooth paved surface by which the army could enter and destroy them?

From her position at the head of the Garfuns, the black witch, the Obe Acotiren, showed no doubt. She only pursed her lips and grunted, once. Standing beside her, white Mother Letty and the Taino witch Maridowa did not even that. The three should have been behind the Garfuns, where they could be protected. If the villagers lost their Knowledgeables, they would be at the mercy of the whites’ fish magic. Yet there the three stood and watched. Acotiren even had her baby grandson cotched on her hip. So the Garfuns took their cue from the three women. Like them, they kept their ground, ready but still.

“Twice five,” whispered Mother Letty. “Twice six.” She was counting the soldiers as they stepped onto the black road. Kima thought it little comfort to know exactly how many soldiers had come to kill them, but she found herself counting silently along with Mother Letty.

The leading edge of the army was almost upon them, scant yards from the entrance to the compong. Camels covered almost the full length of the road. A few of the Garfuns made ready to charge. “Hold,” said Mother Letty. Her voice cut through the pounding of the camels. They held.

Maridowa turned her wide, brown face to the Garfuns and grinned. “Just a little more,” she said. She was merry at strange times, the young Taino witch was.

The soldiers had their muskets at the ready. The barrels gleamed in the sun. The Garfuns’ muskets were dull and scorched. “So many of them,” whispered Kima. She raised her hoe, cocked it ready to strike. Beside her, the white boy Carter whimpered, but clutched his cutlass at the ready, a grim look on his face. He’d said he would rather die than be pressganged onto the ships once more as a sailor. He had fourteen years. If he survived this, the village would let him join the boys to be circumcised; let him become a man.

The thrice seventh haughty camel stepped smartly onto the battlefield, a little ahead of its fellows. “That will do it,” pronounced the Obe Acotiren. It wasn’t quite a question.

The pitch went liquid. It was that quick. Camels began to flounder, then to sink. The villagers gasped, talked excitedly to each other. They had laid the pitch only four fingers deep! How then was it swallowing entire camels and riders?

The pitch swamp had not a care for what was possible and what not. It sucked the brigade into its greedy gullet like a pig gobbling slops. Camels mawed in dismay, the pitch snapping their narrow ankles as they tried to clamber out. They sank more quickly than their lighter riders. Soldier men and women clawed at each other, stepped on each others’ heads and shoulders to fight free of the melted pitch. To no avail. The last hoarse scream was swallowed by the pitch in scarce the time it took the Obe Acotiren’s fifth grandchild—the fat brown boy just past his toddling age, his older sisters and brothers having long since joined the Garfun fighters—to slip from her arms and go running for his favourite mango tree.

The black face of the road of tar was smooth and flat again, as though the army had never been.

One meager row of uniformed soldiers stared back at the Garfuns from the other side of the pitch. Their weapons hung unused from their hands. Then, together, they slapped their camels into a turn, and galloped hard for the foot of the hill.

All but one, who remained a-camelback at the bank of the river of pitch.

The pistoleer slid off her beast. She stood on the edge of where her fellows, suffocated, were slowly hardening. She bent her knees slightly, curling her upper body around her belly. Fists held out in front of her, she screamed full throat at the villagers; a raw howl of grief that used all the air in her lungs, and that went on long after she should have had none remaining. She seemed like to spit those very lungs up. Her camel watched her disinterestedly for a while, then began to wander up the hill. It stopped to crop yellow hog plums from a scraggly tree.

On the hill above, the general sounded the retreat. In vain; most of his army had already dispersed. (Over the next few weeks, many of them would straggle into Garfun compongs—some with their camels—begging asylum. This they would be granted. It was a good land, but mostly harsh scrub. It needed many to tend it.)

Some few of the Garfuns probed the pitch with their weapons. They did not penetrate. Cautiously, the Garfuns stepped onto the pitch. It was hard once more, and held them easily. They began to dance and laugh, to call for their children and their families to join them. Soon there was a celebration on the flat pitch road. An old matron tried to show Carter the steps of her dance. He did his best to follow her, laughing at his own clumsiness.

The Obe Acotiren watched the soldier woman, who had collapsed onto her knees now, her scream hiccoughing into sobs. While the army was becoming tar beneath the feet of the villagers, Acotiren had pushed through the crowd and fetched her fearless grandchild from the first branch of the mango tree. He’d fallen out of it thrice before, but every day returned to try again. She hitched him up onto her hip. He clamped his legs at her waist and fisted up a handful of her garment at the shoulder. He brought the fist happily to his mouth.

Acotiren’s face bore a calm, stern sadness. “Never you mind,” Kima heard her mutter in the direction of the grieving woman. “What we do today going to come back on us, and more besides.” Maridowa glanced at the Obe, but said nothing.

Then Acotiren produced her obi bag from wherever she had had it hidden on her person, and tossed it onto the pitch. Mother Letty started forward. “Tiren, no!” cried Mother Letty, her face anguished.

She was too late to intercept the obi bag. It landed on the road. It was a small thing, no bigger than a guinea fowl’s egg. It should have simply bounced and rolled. Instead, it sank instantly, as though it weighed as much in itself as the whole tarred army together.

Maridowa was dancing on the road, and hadn’t noticed what was happening. It was Kima who saw it all. Acotiren pressed her lips together, then smiled a bright smile at her grandchild. “Come,” she said. “Make I show you how to climb a mango tree.”

Tranquil, as though she hadn’t just tossed her soulcase away to be embalmed forever in tar, she turned her back to go and play with the boy, leaving Mother Letty kneeling there, tears coursing through the lines on her ancient face as she watched her friend go.

In less than a year, Acotiren was frail and bent. There was no more climbing trees for her. Her eyes had grown crystalline with cataracts, her hands tremulous, her body sere and unmuscled. One morning she walked into the bush to die, and never came out again. But by then her daughter’s child, Acotiren’s fifth grandchild, was so sure-footed from skinning up gru-gru bef palms and mamapom trees with his nana, that he never, ever fell. Wherever he could plant his feet, he could go. His friends called him Goat. 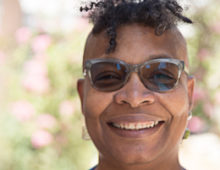 Nalo Hopkinson was born in Jamaica, and grew up in Guyana, Trinidad, and Canada. Her debut novel, Brown Girl in the Ring was the winning entry in the Warner Aspect First Novel contest, and led to her winning the Campbell Award for Best New Writer. She has since published many acclaimed novels and short stories as well as numerous essays. She currently teaches writing at the University of California, Riverside. Her latest novel is Sister Mine.