The London flat changed when Harry moved in. The age-worn First Nation totem, the rampant wooden eagle, acquired a floppy silk bow. Harry changed it every so often: this one was the Maple Leaf; there was a rainbow one for Pride, and on special occasions it also wore a black silky top hat. Harry filled the place with potted plants, which flourished so long as Harry stopped Aiden trying to care for them, and a framed poster of Godzilla adorned by a big red paper heart. A dozen other touches showed it was now Harry’s home. The photo over the black glass gas-fireplace showed Harry as an orange monkey, and Aiden as a crocodile. That was taken at the Glamour Costume Ball; Aiden even started to enjoy being made to look ridiculous, a miracle of being with Harry.

In the first warm weeks of coupling up, Aiden snorted his laugh at these changes. Tall, handsome and muscular, he walked into bars as though he owned them. As though it was one of the smaller and less successful bars he owned. But Aiden had the guileless laugh of a gawky teenager. He’d bought the ridiculous outsized toy orangutan from Hamley’s, which occupied the guest chair, and which he hoovered from time to time. Harry was ginger, if you hadn’t guessed yet.

Months later, and a bad week all around. Harry skipped lunch, because time and the diet pointed the same way, but he’d been caught by the boss at 4:30, two hundred pounds of self-righteous mediocrity on the rampage. Some marketing is quite glamorous but not Harry’s bit. Harry’s presentation was late and inadequate, his monthly filings were late, and the boss had views on punctuality and focus and their connection to the work to be done. These views could only be sucked up and endured. Trotting home, late, it was slashing down rain and somewhere in sight of a Tube station, there’s always a blocked grill, making a little lake. One of those days; the taxi didn’t slow down before slicing into the November water, drenching Harry from the chest downwards. Bastard.

They were splendid little lamb chops from a posh butcher. Harry had big worries on his mind, but also, Harry hoped Aiden would’ve grilled the chops, so he could eat at once, or Aiden was waiting ready to put them on, so they’d be fresh and hot. Either would be excellent. Aiden was getting good at salads, if Harry bought the stuff and marked the recipe with a Post-It. They’d talk about their day, Harry would drink one glass of red, and there’d be a few hours in their own universe, two stars rotating round each other, exchanging warmth.

The flat was subtropical. Aiden was in the bathroom cleaning his teeth, from the noise. “Huurghuh” he said. Harry went into the kitchen without taking off his soaking wet coat, dripping on the wooden floor. A cold oven, no neat little salad, although the bottle of red stood open and a glass nearby.

Thanks for the effort, thought Harry, shivering a bit, and opened the fridge. No chops. He looked twice, then he looked in the bin, and found the empty packet.

“Aiden, where’s the chops?” Harry called. Aiden walked into the kitchen, stood in the doorway. In true-form, six feet nine of russet hairless muscle, naked and male. In a previous spat Harry said five parts Olympic athlete, two parts iguanodon, and a dash of brown leather sofa. Aiden towered over the human, who read him with ease. Half smiling and half frowning, his head crests down, so Harry read guilt, guilt, guilt.

“I wanted chops,” said Harry, tired and wet and cold and hungry. Thanks for the effort. You were late three days ago and I cooked for you, although I was exhausted.

Aiden tilted his head to show his throat a tad, held up paws palms out, claws retracted.

“I ate them. I was very hungry and I thought, I’d just have mine now. And I ate all of them without thinking. Sorry.” His emerald and gold eyes pleaded, but Harry wasn’t feeling forgiving.

“Raw,” said Harry, taking off his coat, hooking it over the radiator. There were no pans out, clean or dirty. “You wolfed the lot down raw you selfish monster. I bet it took three minutes, you bloody dinosaur, and you didn’t even taste them going down. It could have been dog.”

“I don’t want a bloody omelette,” said Harry. “I want to come home and find the food I bought. I get hungry, too, you know. I’ll buy a fucking kebab. Eat it in the shop.”

The People were meat bores. Harry disliked doners but waving one under Aiden’s snout was a punitive measure. Look at the utter crap you made me eat; hunger-food, one step up from rat or seagull.

“Sorry,” said Aiden, squeezing a lot into one word. The People don’t cry for emotion, but his big flecked eyes showed pain. Flick and he was human-Aiden in a big black military coat, a hat, boots. Human Aiden had people come up to him in the street and ask if he’d thought of modelling. He reached for his keys on the hook.

“I hate us bitching. I’ll go and get some more,” Aiden said.

“Like you can find organic lamb around here before I die of hunger. I’m not your pet, you bloody diplodocus, you bloody handbag. I’m a person, an equal person. Don’t run away from being told off. I’ll not have you breathing dead raw sheep on me all night. I’ll sleep on the couch.”

“I double-cleaned my teeth specially,” said human-Aiden, very deflated now. He went back to true-form; the keys didn’t even tinkle. When Harry thought about it, how you could tell they were the same person, how they had the same expression, it was extraordinary.

“Piss off, I’ll make toast. Then I’m going out. Might sleep in Hendon tonight. Least Mum would cook me a hot meal.”

Aiden made some choked grunt, and pissed off. Harry poured a glass of red, put bread into the toaster — seeded bread that made a mess, but he liked it. He got the eggs, the butter, and the cheese out. Great day for the diet. Got the omelette pan out. Thought about herbs for a minute.

“I try,” he said, palms towards Harry. “I try to be a good partner. It was stupid and I should have phoned, or got organised. I was distracted. Is there anything I can do?”

“I’m glad you liked the sodding chops,” Harry said. He finished the glass and slapped butter on the toast. “You can make me the omelette.” He leaned forward and gave Aiden a microscopic peck on the snout. “Hmmm, I can only smell one big chunk of raw animal but it’s not unattractive.”

He loved Aiden’s spicy smells. Even bathed he smelt of sandalwood and ginger and chilli, and when he hadn’t bathed, he sent out a ripe, exotic animal musk. In fact, Harry gave Aiden a teasing little breath up the nose-slits, a come on.

Aiden took Harry in his arms, and kissed, as the People do, with their big tongues. All that strength and power, and Harry felt safer in his arms than anywhere on the planet.

Aiden said, “You’re wet. You should change into something dry while I do this.”

Then he said, “If Security catch us, they’ll wipe your mind. Ancestors alone know what they will do to me. And if the humans find out, they’ll probably torture me to find out what the hell I am. So that’s what I was thinking about, when I ate your chops.”

He picked up eggs at claw point, very delicate in those big paws, and broke them in a bowl. Six eggs meant he wanted some too. “But I have to be with you, bloody monkey, because I love you, so we’ll deal with it.”

“I know,” Harry said. “It’s like shagging a spy, you can never quite relax. Oh well, lizard-breath, you’re forgiven, I suppose. Let’s just not get caught, by either lot.”

Harry kissed that dragon-wing ear, as it was there, and stroked Aiden’s back, scuted like baby alligator skin. Aiden sent monkey catch cold monkey need change, which meant going into the bedroom. Harry really liked Aiden’s apology and it took ages. The cheese omelette was fabulous, runny and hot, when they finally got round to making it at midnight. 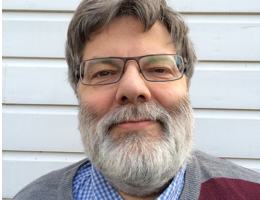 Books expanded Stephen Cox’s mind as a child—myths history, fantasy, SF. Good stories came in many forms, but he remembers most those which challenged the world of now. Ged was red-brown and won without killing; Jerry Cornelius was a jerk, but a pansexual one. Stories could be about relationships too. Now he’s dug in for the duration in London (the big, 2000-year-old one) working on two serious-and-lighthearted novels which deal with love, loyalty, family, and difference. He enjoys writing characters he’d have a massive row with—writing is about a reach of empathetic imagination. He tweets at @stephenwhq.