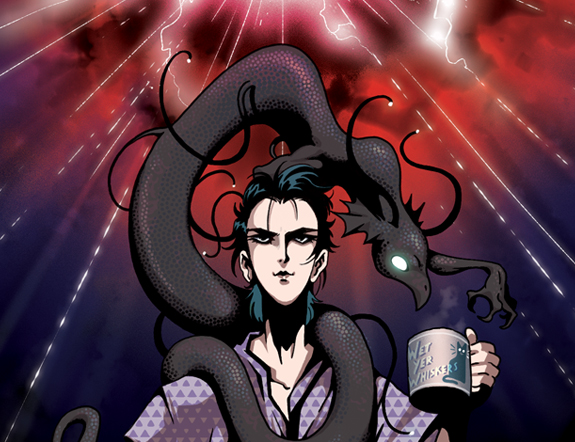 Forty-six minutes and a trickle of seconds remained before the end of the world—this world, anyway—and I was trying to evacuate the second-last client on my list.

The humans had various names for their world. My partner Rawk and I called it Seedworld 722.11.15, which was our superiors’ label. We’d seen a lot of Seedworlds perish, she and I.

As worlds went, we’d arrived at a particularly nice corner of this one, a coffee shop. The air was rich with the aromas of whipped cream and heady brews and flaky pastries sprinkled with powdered sugar and crushed nuts. I don’t usually drink, but Rawk has a number of vices, and one of them is peppermint syrup. Just now she had her tail curled around my neck and her talons digging painfully into my shoulder.

I don’t, in my native shape, have shoulders, but Rawk liked having a perch, and I didn’t want to scare the locals, so I’d created a human-shaped shell. At the moment I was waiting in line for a mocha with a double shot of peppermint syrup. As for Rawk, she had up a don’t-notice-me shroud. She knew better than to let the humans see something that resembled a dragon with a lot of tentacles, especially if she wanted that drink.

People chattered in bright, jaded voices, or jabbed at their phones’ glowing screens. A few couples smiled sidelong at each other—first dates going well. And then there was a student with holes in their sneakers, kneeling by a bookshelf labeled TAKE ONE, LEAVE ONE. It was mostly full of unwanted textbooks, well-thumbed category romances, and aging mysteries. That bookshelf was the focus of my attention.

The coffee shop played the kind of music that invites slow rain on a slow evening, although it wasn’t raining outside—yet. And when it did, it wouldn’t be water. I could see beyond the ceiling with its whiskey-colored lights, up past the smear of sky and into space. I was always, always aware of the Devouring Matter that was on a collision course with Seedworld 722.11.15, a weapon of ancient times. When it arrived, it would gnaw the Seedworld and everyone on it into their constituent particles. The Seedworld’s inhabitants watched the skies with their own cruder instruments, but they had yet to develop the ability to spot such threats.

There are always more worlds, more peppermint syrup, I reminded her.

This will be my last opportunity for it from this world, she retorted, snapping her beak just past my ear. Don’t mess it up.

I collected the drink and held it up. Rawk grabbed it with her forepaws and gulped deeply; no one took any notice of her. Rawk can drink raw plasma. She was in no danger of burning herself.

It’s a pity we can’t save that one, Rawk said without coming up for air.

She was referring to the student. I hadn’t paid them much heed earlier. A shock of black hair, medium-dark skin with pock marks, fingernails sheened with bronze polish in an ongoing effort to stop from chewing on them. I saw more, of course: fluency in two languages and attempts to learn a third; the taste of the first girl they kissed; their favorite snack at eleven p.m. (waffles with peanut butter—I eat stray quarks when I’m bored, so who am I to judge?). Their name, too, although names are a private matter among my kind.

What makes that one special? I asked.

And then I saw. The student had picked up the book—the book—and hefted it. Started flipping through the pages. This wasn’t the first time they’d nibbled at the story within. But the student frowned disconsolately, as though the comfort they sought was eluding them.

Can’t we leave them to it? Rawk said. She had always been the more softhearted of us. We could hit up a different copy.

I checked the progress of the Devouring Matter. That’s cutting it fine. I’m fast when I shed human shape, but even I have limitations. Among other things, the nature of the work we do tends to warp the passage of time. Especially since someone insisted on peppermint syrup.

Every world deserves to be honored with one last libation, Rawk said. She bit open the cup, licked up the last sweet dregs of the drink, then casually crunched down the cup, lid, and holder for dessert.

Since she had finished, finally, I could do what I had come here for. I left behind my human shell—Rawk would puppeteer it as necessary—and dove into the book. I was good at checking the records. The rest of the book might be empty of clients, but one remained. I was going to evacuate her no matter what it took.

Every book contains a different world. For the most part, this one had been hollowed out by the previous evacuees. The work of my colleagues, even if they hadn’t been able to persuade my client to leave with them.

Still, I could glimpse the negative spaces left by the evacuations. A shadowy range of mountains, reduced to brushstroke suggestions. A house by the sea made of plesiosaur bones, once the residence of a half-mer youth. A winter wood swept bare even of snow, the black-brown trees grasping at a sky empty of sun or moon, wind or cloud.

None of those concerned me. Instead, I manifested directly inside an inverted spire that speared downward into a chasm of ice, suspended on ropes of spider-silk. There my second-last client awaited me.

She wasn’t much to look at, even in the red livery of a royal servant. At the moment she was kneeling before an empty throne. I’d arrived at a particular moment, specifically a flashback to the days when she was a girl beholden to a great and terrible queen, hoping always for the queen’s regard. Only later in her story would she rise above her allegiance; only later would she sacrifice everything to help the story’s heroine.

“Hello,” I said. I didn’t bother putting on human form. The characters in stories are less fragile, in some ways, than their readers.

The girl looked up. She had a round, brown face, and her black eyes regarded me with the particular steadiness that had told even a tyrannous queen that this one would grow into something special. I could see why the student in the coffee shop adored her so.

“Hello,” the girl said. Her voice was soft but not shy.

“Everyone else has already left,” I said. “It’s your turn.”

“The world is going to end,” I said. Sometimes it took bluntness. “This world, with all its books, and all the humans who would have remembered those books. You’ve done your job, inhabiting this story for their benefit.”

She still didn’t move. “That’s all very well,” she said. “Why can’t you save the readers, too? Or the writers, for that matter?”

“Not my department,” I said, with professional regret. It was a conversation I had every so often, the way some of my clients got attached. “It’s for the humans to save themselves, or not. I don’t have any jurisdiction over that end of things. But I do have the power to take you to sanctuary so you don’t perish with them.”

“Right now, right here, I still have a reader,” she said. The student, who loved her so. “And a few more in a couple other places around the world—under the covers past bedtime, in a library, one copy dog-eared in a boys’ locker room. People read in the oddest places sometimes.”

She was holding me up, especially since I couldn’t knock her unconscious—as if that meant anything to someone living inside the world of a book—and drag her away with me. It had to be voluntary. My superiors were very clear on that point. Rawk, too, if it came to that.

“Please,” I said. “Everyone who has existed in the service of story gets their ticket out. The villains, the monsters, the creeps; the heroes, the sidekicks, the minor characters who show up in half a line and never appear again. Everyone.”

Now the girl was smiling. “No, thank you,” she said. “It’s a generous offer, but I couldn’t possibly accept.”

I tried to conceal my dismay. “Why not?”

“If I can’t save these last few readers,” she said, “the least I can do is accompany them on their way out, wherever they’re going. I don’t suppose you know anything about that?”

“Unfortunately not,” I said. Again, not my department. There’s speculation, of course, but it’s strictly above my pay grade. Dreadful penalties if I make things up, although that’s never stopped the humans. Of course, the humans don’t answer to my superiors.

The Devouring Matter was accelerating toward this Seedworld, right on schedule. I had to get going.

“One last chance,” I said. I respected the girl’s calm dignity, but I did have a record to uphold. “If you don’t come now, I can’t do anything for you.”

Her smile turned slightly pitying. “Is that all you’ve learned, in your profession? Of course there’s something you can do that isn’t forcing me to abandon this student, and the kids reading past bedtime, and the librarian who’s abusing her privileges to renew an old copy of me, and that one teenage boy who isn’t allowed to read fantasy at home.”

“And what’s that?” I said. By this point I was resigned to my failure.

“You can tell your colleagues the story of how I stayed behind.” She rose then, and rested her hand on the arm of the throne. In that moment she looked more like a queen than many I have escorted to safety.

“That I will do,” I said. I manifested in human shape long enough to bow to her, one final courtesy, then exited the book.

Rawk looked anxiously at me when I re-entered my human shell. You don’t have her, she said, quite redundantly.

No, I said. She wouldn’t come. I’ll tell you about it on the way to the last client.

Rawk made a sad murring sound, and I reached up to scratch her under the chin. Then we left behind our physical forms and traveled with invisible wings to the last client while the world’s end sped inexorably closer. 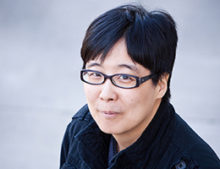 Yoon Ha Lee’s debut novel, Ninefox Gambit, won the Locus Award for best first novel and was a finalist for the Hugo, Nebula, and Clarke Awards. Its two sequels, Raven Stratagem and Revenant Gun, were also Hugo finalists.  Lee’s middle grade space opera, Dragon Pearl, was a New York Times bestseller, and his steampunk fantasy Phoenix Extravagant came out from Solaris in October 2020.  His short fiction has appeared in Tor.com, Lightspeed Magazine, Clarkesworld Magazine, The Magazine of Fantasy & Science Fiction, Beneath Ceaseless Skies, and other venues.  Lee lives in Louisiana with his family and an extremely lazy cat, and has not yet been eaten by gators.