You Will Never Know What Opens

One of the doors in the closet, behind the boxes, leads to a harsh desert world. The first time you stepped through, you didn’t bring water, and nearly died as you crouched beneath the sun, waiting for the door to open again. You were saved only by the unexpected appearance of someone draped in gray, who gave you water before showing you a mottled face of lizard skin. You screamed. By the time you returned, you could barely stand. Your head pounded; your skin was badly burnt.

You placed boxes in front of that door to ensure you wouldn’t slip in again by mistake, but on cold nights, you find yourself looking at the closet.

You buy a few lottery tickets, think about trying out one of those work from home scams. But working from home, you know, would be the worst.

Home is full of doors.

The door in your bathroom shower leads to a forest of sorts. Not a safe one. You haven’t figured out precisely how the biology works, but it’s clearly not quite the same as Earth: The water burns your skin and mouth, leaving you very sick, and you have to be careful to touch as little as possible. You shouldn’t return, really, not considering what it does to your skin. But the quiet is so profound, so relaxing, that you find yourself sneaking back anyway, until the rain starts pounding holes into your skin.

It’s impossible to tell which doors will remain open on the other side, and which will immediately shut, trapping you there for hours, or days, or weeks. It’s why you begin to take a backpack with you everywhere in the house. Nothing heavy—you’ve learned from sad experience that you may need to move very quickly on the other side—but filled with essentials: a bottle of water, some trail mix, a comb, a flashlight, bandaids, sunscreen. You try to leave a light sweater or a blanket in every room, so you can grab it before you step through.

But sometimes the colors on the other side of the door are so beautiful you forget.

And some of these other worlds are warm.

The worst part, though, is that when you return, those hallway doors are gone. Permanently. Replaced by other doors, thinner doors, wider doors, older doors, newer doors, but gone. Sometimes you wake up at night, thinking of the world with nine dancing rose moons, and can’t stop crying.

One of the doors in the spare room—the one right behind the bed—leads directly to a world of dragons. After just one trip, you realize that it, too, is far too dangerous to return to, but you’ve taken to bringing your crafts and other things into this room, and sometimes even watching TV on your laptop there, just so you can raise up your eyes to the door and—for a second—see a dragon.

Every once in a while you think about selling the house. You’re broke, after all—these trips to strange places don’t exactly pay the bills—and maybe it’s time to downsize, to look for a better job, to travel to familiar places, or at least places on this planet that won’t kill you. Or get a roommate. Plenty of people have entered the house and never even seen the doors. A roommate should be safe.

Though that would mean never entering the spare room again.

No. Better to just let a few things go unpaid.

One of the doors in the garage leads to a palace. You blinked the first time you stepped into this one, needing a moment to drink in all of its luxurious beauty: marble floors, fine paintings, gold and silver furniture.

But only a moment, before you were immediately seized by people with purple skin and strange scale armor, who seized you roughly and began shouting at you. The three eyes on their faces distracted you so much that it took you another moment to realize that you had no idea what they were shouting: It was in a language that you’d never heard.

That was surprising: In every book you’d ever read, everyone in other worlds spoke English. It had never really occurred you that they would speak anything else. You tried the few words of Spanish you’d learned in high school, the few words of French you’d learned to impress that cute guy from Quebec. The denizens of the palace locked shackles on your wrists and dragged you away. You tried not to scream.

They brought you to a cave beneath the palace, chaining you to one of the rock walls. As your eyes adjusted, you realized that you weren’t the only creature—person—there, and not everyone there had three eyes or purple skin. It gave you hope: You’d always assumed that other houses had doors, that you were not the only person who did this sort of thing, and that it must happen on other worlds as well. You nodded and smiled in the dim light, croaking out “Hello.” No one responded.

Over the next days—weeks—you learned a few words of the three-eyed purple people, trying not to think the phrase purple people eater in your head. You played with the shackles. You broke both thumbs, managing to free your wrists. When you lifted your arms, the others in the cave started to shout, drawing the attention of the guards. In the ensuing chaos, you managed to slip out of the cave, only to get thoroughly lost in a maze of tunnels and caves. Finding your way through the castle without getting caught was another two days. By the time you’d finally made it home, your power had been shut off.

Two weeks later you stepped through again—after very carefully listening for footsteps on both sides of the door, just in case someone was watching you from this side, too. You’d seen mountains in the background during your escape, and green lakes, and this wasn’t something you could resist.

You set up automatic bill payments for everything. It’s not a perfect system—your income is still sporadic, and if you have nothing in your checking account, you’re screwed. You consider selling the things you’ve brought back—purely by accident—from other worlds, the things you have stored in the boxes in front of the door to the desert world.

You can’t quite manage to do so, though.

The living room has several doors. This can be a problem, not just because sometimes the doors creak open, leaking sounds and light from other worlds, distracting you from whatever else you’re doing, but also because it makes it very difficult for you to put up bookshelves and pictures. You don’t want to block anything, of course. You finally end up putting a line of shelves up near the ceiling, above all of the doors, and stack the pictures in a closet with only one small door, to a world you don’t much like. Someday, after all, the doors in the living room might close permanently, and you’ll want something to cover them.

One of those doors, however, leads to a world of dinosaurs. Only slightly safer than the world of dragons, but you are not about to give up your chance to ride a dinosaur.

Not everyone in these other worlds drags you to a prison. Some—like whatever, whoever that unknown creature in the desert was—actually help. Others are willing to communicate through gestures, or study the quick sketches you make in an attempt to explain. On one or two worlds—the ones you visit more than once—you even start picking up a word or two of the local language. You start to hear these words in your dreams.

Most of the doors in the kitchen seem to lead to friendly worlds. But not always. It doesn’t help that once or twice you’ve been spattered with tomato sauce as you walk through, which is initially taken for spots of blood in some worlds—and seasoning in others.

It does help that sometimes you’re carrying freshly baked cookies when those doors open, calling for you to step through. Everyone loves cookies.

Sometimes you worry about how you might be changing these worlds that you visit. You remember reading some book or another about how just reading a story, a book, a text, changes it by the very act of reading. How might stepping into it change it?

The paramedics don’t say anything when you say that you fell off the roof, but you do catch their skeptical looks.

You get very good at baking.

From time to time, you even remember to bring cookies to your job in this world.

Another living room door leads to a world of endless night, warmed by fires from deep within its earth, with flocks of phosphorescent birds flying silently beneath the distant stars. You come here to slide into the warm, thick lakes and pools, and watch the two tiny jeweled moons track across the sky. You wonder if the other side of this world is bathed in endless daylight, if you should try to follow the birds to that light, but the water here is too warm, too delightful.

Plus, you really don’t want to risk going too far from home. You never know how long the return door will remain open.

Your mother fell through one of the doors in the kitchen. This was unexpected. Up until then, you’d just assumed that most people couldn’t even see the doors, let alone go through them; you’d had plumbers in to fix the bathroom after the cheetah incident, and they hadn’t seen anything. One friend had noticed the extra doors in the living room, but had assumed they were just some sort of decoration when they didn’t open. And yet, your mother had just leaned against the wall, and slipped.

You’d left your backpack in the living room. You didn’t have time for it. You also didn’t have time not to get it: You knew the world she had landed in—one of ice and snow and giants. She would need water. A sweater. You rushed to the living room to grab the backpack and two of the throws that you kept there. By the time you returned, the door was closed. You pounded on it with your fists, kicked it, searched desperately for the handle, any handle, any way to get this open, before slumping down beside the doorway, leaning against it.

You couldn’t stay in your kitchen, not forever. You had to eat, drink, make at least some money to pay for that, to keep the lights on your house. To live. And you wanted to live. You wanted to open more of the doors.

Five days later, you got an apologetic email from your mother. Had she by any chance left her cellphone at your house? She remembered putting it into her pocket, but—

Your fingers hesitated over the keys. Behind you, you heard the creak of an opening door.

The world you’re in right now is lit by three dim suns, two red, one white. You watch the shifting light on the lake below, listen to the wind, and shiver in the cold. Beautiful, and wrong.

Someday, you are certain, one of those shifting doors will bring you to the right world.

For now, you slip through the door back into your house and start cooking dinner. You can’t wait too long to eat. Doors are waiting. 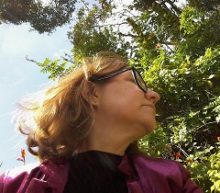 Mari Ness lives in central Florida. Her other work has appeared in Clarkesworld, Tor.com, Uncanny, Fireside, Diabolical Plots, Apex, Strange Horizons, Lackington’s, and right here in Lightspeed and Nightmare. Her poetry novella, Through Immortal Shadows Singing, is available from Papaveria Press. For more, visit her occasionally updated webpage at marikness.wordpress.com, or follow her on Twitter at mari_ness.