In your story, “The Sweet Spot,” Ruthie and Matt are siblings caught in the middle of a drawn-out war, living in Kauai, Hawaii. How did you decide to set the story in this location?

I have been writing this series of squid stories, as I call them, for a few years—a couple have been in Strange Horizons and another was in an anthology called Fast Forward: Fiction From The Cutting Edge, edited by Lou Anders. A lot of these are about Ruthless Gerrickle’s life. I’m writing and publishing them out of chronological order, but “The Sweet Spot” is one of the earlier pieces—in other words, she’s still a kid in this one.

I have a decent sense of the geographical direction taken in the war between the Democratic Army and the Fiends, and many of my touch points for the history of the war are the big battles for U.S. cities. There’s a Battle of Las Vegas story I haven’t finished yet, and a big fight in Texas when the Fiends cross the Rio Grande, putting ground troops on mainland U.S. soil for the first time. “Five Good Things about Meghan Sheedy” takes place when things are a lot worse, during the Siege of Seattle.

When I was considering this particular story, I was thinking about the period before the Fiends get into Texas, and other incursions they might make onto U.S. territory. And Hawaii seemed as though it would make an excellent outpost for a big Kabuva Consultancy base, for all the reasons why Pearl Harbor makes a good naval base, but also because they’re an oceanic species. The climate and terrain of the Hawaiian beaches appeals to the squid. So, with that, I started considering a Battle of Hawaii.

Music plays an important role in the lives of Ruthie and Matt, from Kabuva folk songs to their father’s guitar to their concert performance. Why did you choose to use music so prominently in this story?

I sing in a choir called Out in Harmony here in Vancouver, so I know a fair bit about making music, and that helped—in a sense, some of the research was done for me. I also wanted to touch on the importance of music to soldiers. Songs are something that humans have always taken with us to war: you can’t go on the march with a painting from home in your pack, or bring your entire library of books with you (well, with modern tech you could carry an e-reader loaded with books and photos, but that’s a new development). But you can always sing a song. Music is a portable piece of home. War songs are as old as war, and music offers inspiration, comfort, a sense of a shared cultural background. Sometimes singing together can offer a crucial form of emotional relief to soldiers in horrifying situations.

Bringing Kabuva’s music to Earth, along with all the young squid soldiers and their weaponry is, therefore, a way to create a little bit of common ground between a fairly peculiar alien species and people—both their fictional human allies in the stories and readers too.

Squids and Democrats, Fiends and Friends. Could you give us a bit of the background for the origins of the war between the Squid and the Fiends?

Heh. I have wayyyy too much history worked out for this universe, considering that so far there are only a handful of stories to justify the time, thought, and reading I’ve put into it.

But here goes: a couple centuries before Ruthie’s birth, first contact happened. The aliens that found Earth had vastly superior technology and they found a few things here of economic value. In the process of establishing trade relations and extracting the resources they wanted, they messed up the global economy pretty badly. Over time, things degraded to the point where Earth was dependent on alien aid to function and a lot of people were extremely poor.

In time, a movement arose in Southeast Asia. It called itself the Friends of Liberation and its platform was anti-offworlder; they claimed to want to evict every last alien from the planet. There was a hypocritical component there, as they were getting their funds and weaponry from an alien sponsor. They also had a totalitarian streak: as far as they were concerned, the way to make earth alien-free was to establish a single world government, one that was in no way democratic.

As this movement spread, a number of nations formed an alliance to resist the Friends of Liberation, and they gave them the moniker Fiends because that’s what we do in wars—we dehumanize the enemy through a number of strategies, including name calling. There was no way the Democratic Army could resist the Fiends without offworld assistance, and for that they turned to the Kabuva Consultancy—the squid.

Though mostly the casual name I use for this series is “the squid stories,” I also sometimes call it “The Proxy War.” Because what this conflict really centers around is a global-scale human civil war, where both principal combatants are being propped up by opposing alien governments.

As computer technology changes the world around us at an incredible speed, much discussion has taken place about the future of death, and how technology can and will alter how we view death. In your story, the children are able to have conversations with their dead father using a computer program. Do you feel technologies such as this are close at hand?

If we chose to use it in that way, I think we could get up a fair amount of what I’m describing right now. I was visiting my 90-year-old grandma a couple years ago and she was strumming a ukulele and holding it, for some unknown reason, upside-down. It was incredibly charming, and I had my camera out. Two button-clicks later, I’d captured about thirty seconds of video that’s now tucked away on Youtube even though there are only four people in the world who’d ever want to watch it. And even then, as I was recording Grandma, I thought, “I’ll have this when she’s gone.”

Which is morbid . . . but I’ve lost a lot of loved ones this past decade. I’m one of those people whose laptop wallpaper cycles through a random sampling of the photos of my hard drive . . . and every now and then I’ll walk into my office and be confronted with some image I shot at a funeral, or a picture of someone who’s gone. It’s sometimes nice, sometimes painful, sometimes sobering. It’s also a way of stumbling over the past that didn’t used to exist.

The AI in my story cut and pastes bits and pieces of video recordings into new conversations. We could do that now, given a big video archive; it wouldn’t work all that well yet, but programmers are working on programs that do an ever-better job of faking conversation. As for raw material, many of us are busily engaged in uploading tons of stuff from our lives onto sites like Facebook. By the time I’m seventy, how much footage of me will be online? Enough to CGI a fair amount of video of faux Alyx, if anyone wanted to do such a thing.

That said, I’m with Ruthie in stating the obvious: no AI is going to make a decent substitute for the presence of a real loved one. At best, it might provide a little pain relief. Is that a good thing? Well, grief is awfully painful.

We get hints about Kabuva, but what would life be like for a human on Kabuva, living in Earthtown on the Blighted Sea? Would they be free? Pets? Something in between?

I have a story about Ruthless as a much older woman, in Earthtown, after the Democrat defeat. It’s called “The Town on Blighted Sea” and it goes into exactly that. Earthtown’s a city for refugees, and it’s a mostly-human environment, because it’s built on land and the squid live in the oceans of their homeworld. It is also more than half-empty, because the Kabuva thought they’d get a lot more of their human allies off of Earth than they actually ended up rescuing.

Finally, do you have any new projects you’d like to announce?

Sure! My second novel, Blue Magic, came out in April. Blue Magic is the sequel to my ecofantasy Indigo Springs. It has magic and monsters instead of high-tech weaponry and aliens, but there’s a big global conflict there, too, and some of the themes are similar. And right now I’m at work on a trilogy set on Stormwrack, the world I introduced in my Tor.com story “Among the Silvering Herd.” 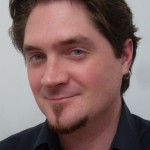 Caleb Jordan Schulz is a writer, illustrator, and nomad, currently finding himself in Buenos Aires, Argentina. His fiction can be found in Subversion, Scape, Crossed Genres Year Two anthology, Ray Gun Revival, and Innsmouth Free Press. In between his work for Lightspeed Magazine, he’s a freelance editor, and blogs occasionally at: theright2write.blogspot.com.