The two main characters of this story are both military veterans, one human and one android, one living as a civilian for some time and the other a recent discharge. How did you approach these two points of view on a shared history?

Even if I didn’t show Mark’s headspace specifically, I had to know what was going on for him in his silence and try to convey that through Tawn and what he gleaned and understood. I basically approached it as two men who share similar experiences and are able to find common ground. At the heart of the story to me is that sense of camaraderie between veterans that spans any divide created by age, specific war, gender . . . and in this case, human and android species.

Surviving trauma and living in the aftermath of trauma are themes that resonate through “A Good Home,” and that I recognize from your excellent Warchild series as well. It’s interesting that in this story, we explore the aftermath absent the traumatic events themselves. What inspired you to take this particular approach?

Thank you so much! I’m a little surprised how much Warchild has endured and I’m very grateful. In “A Good Home,” I really wanted to show the aftermath. That it’s an ongoing experience—war. It’s not just what happens in battle or when someone’s specifically in the uniform, and it’s not necessarily linear because emotions aren’t, and, frankly, because those of us who aren’t in the armed forces don’t necessarily pay much attention once the warriors come home. We shouldn’t have to see the flashpoints of those experiences to at least try to understand the people as human beings who shouldn’t be forgotten or dismissed. Also because Mark himself doesn’t remember and that’s a reality that sometimes happens, too. People don’t always have the details, but they have to deal with the fallout regardless.

I just struck on this idea, after seeing reports on VA hospitals and being aware of the issues surrounding the government’s responsibility for returned veterans, that if in the future we created androids to fight in our wars—what would happen to them after? I didn’t want to make the government the Big Bad necessarily—even if they might struggle with how to deal with their decisions and are in some way always catching up to the fallout. I wanted to think that the government would at least try to help their wounded warriors—whether human or android. And if they acknowledge that the androids have emotional capacity and can therefore experience trauma, then there would have to be a program to address that. We spend a lot of time and care (though maybe not enough) for the welfare of homeless animals. So why not also for the welfare of the soldiers we created ourselves and put into the worst situations to fight our battles? And, obviously, I was conscious that there is something applicable in that narrative to how we are currently treating—or not treating—our returned veterans. Both as an institution like the government and as civilian citizens.

What does it mean to you, to be a part of POC destroying our way through science fiction? Are there corners of SF that you think may need particular attention as we wreak our destruction?

I love these magazine issues. It’s an opportunity to read (and offer) different perspectives, and as a writer, that’s at the heart of it for me. I write to explore different perspectives. It’s a human endeavor to me and a personal responsibility to myself. I push my own boundaries, ideally, for greater understanding, too. It’s not just about offering a greater understanding to a reader; we are none of us infallible to having our own preconceptions and assumptions. “Destroying” allows for some breakage of pigeonholes and prejudices, and in that sense, every corner of every genre can do with some destruction and rebirth. Otherwise we’re left with stagnancy or, even worse, regression. I think because my “milieu” in most of my work has dealt with war and its effects—and war is one thing that’s sadly consistent in all of human history, spanning continents and cultures—that continuing to challenge the conventions of that genre is important.

What’s next for you? What can readers look forward to from you in the future?

I’m currently writing a couple more short stories for anthologies, working on a new novel which I don’t want to talk about in detail yet, and there will be more coming out from the Warchild series in one way or another. I’m pretty stoked about all of it! 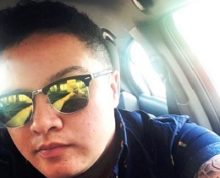 Nicasio Andres Reed is a Filipino-American writer, poet, and essayist whose work has appeared in venues such as Strange Horizons, Lightspeed, and Shimmer. Nico is currently pursuing an MA in creative writing at the University of the Philippines- Diliman. Find him on Twitter @NicasioSilang.