Love is a maze, in your story “Give Her Honey When You Hear Her Scream.” Or is love the monster itself? Will you tell us a little about the inspiration behind this story?

My brain’s a used bookstore. Bits of cool hoarded shit bang up against each other in the shelves. In this case, a couple years ago, I ran across a reference to a Cretan myth involving sacrifices to a labyrinth goddess whose real name couldn’t be spoken. You had to talk about her somehow, so one of the names that was used was Despoina—Δέσποινα in the Greek, Mistress in English. Mistress of the End of the World is another way of referring to the same goddess, and that usage actually gets applied to Cleopatra in some of the 1st century BCE pseudo-Sibylline Oracles (apocrypha I used in my novel Queen of Kings). There was an accounting of what you might need if you were a human trying to get through a labyrinth, tribute-wise, and it included a lot of honey. One amount for all the deities, and then a second, enormous amount for The Mistress, who needed to be bribed with sugar.

And then I had a separate random idea involving fingerprints.

I mashed it the fuck up, added the monster (“In the middle of the maze, there’s always a monster,” was the first line I wrote, because hell, there aren’t too many things I know for sure. That’s one of them.) and it became this story.

I think in this case, love is everything: scenery, actors, play. Love is like that, no matter whether you’re in it or out. It takes over. But the story is literal. There’s a monster. It’s hungry.

It’s hard to know whom to root for: the jilted spouses who initially seek revenge, or the lovers who cannot resist each other. What was it like for you in writing from both sides? Did you ever have to choose one over the other?

This story is me capitalizing on something that can also be a gnarl, writing-wise. I have a convulsive desire to tell every side of the story. I used to write screenplays and plays. One of the things that always went wrong with my stories in those days was that all my characters wanted to tell their side of the story. My plays were always full of monologues. Even the taxidermy had a POV.

In life, it’s very rare for someone to be the villain of their own story. I’m interested in people doing awful things and feeling reasonable in doing them. That seems realistic to me, fantasy story or not. So, that happens here. People do terrible shit, and nobody doing the bad things feels like they’re nuts. They feel justified.

So, when I was writing “Give Her Honey When You Hear Her Scream,” I fell in love with both sides in turn, and because I loved them, I gave them each presents. I wrote an entirely different version of the true-lovers, and then snipped that out, because it wasn’t right. It was too sweet. It needed to be dirty and hot (and sweet, too) to be believably irresistible. The witch and the magician, on the other hand, needed awkwardness and desperation. Initially, I thought the witch and the magician were going to be really villainous. They were, after all, fighting against true love. And true love, in a nice story, is supposed to conquer all. Apparently, I’m not too interested in nice stories. Here, the two jilted spouses are justifiably upset. And the two lovers, while being deceitful, are also truly in love. You can’t say no to that. I believe in love. So, hell, I sympathize with everyone in the story. I’m on all the sides.

Interestingly enough, the jilted spouses are both proficient (to a certain degree) in their respective magics. How do you think this colored their behavior and resulting journey?

In this story, the lovers aren’t magic. The only magic they really have is that they’re in love. But oh, my, god, love is major magic. There’s a reason we talk about being bewitched.

So, I think the witch and the magician, who are the fucked-over parties in this equation, got magic from me because I wanted to make things fair. The lovers get love. Their screwed-over spouses get spells. And then I was interested in what would happen if they were pretty good at what they did, in a kind of pragmatic professional sense. Magic here works like a recipe, a couple of chefs chopping things up, and taking care of business. Magic is always about defying the natural laws, and the two magical entities in this story do that in a big way, but they do it as a kind of matter of course. I’m interested in what weird bullshit we do to try and manage our emotions. Here, vengeful magic. They’re actually able to do something about the fact that their spouses have fallen in love with each other. Kind of, anyway. The vengeance, though, is never as satisfying as the love.

This isn’t the only tale of love and betrayal you’ve written. Your historical fantasy Queen of Kings, about Cleopatra, was released in May 2011 by Dutton. What draws you to these timeless themes?

I’m massively interested in love, and in the way it can transform a person. (Or not a person—a creature, a civilization, as has happened over and over. Trojan War, fought over a love affair. Fall of Egypt to Rome in 30BCE? Love affair.) Particularly, I’m interested in the gory aspects of love, of falling in, of falling out. Of what you might do to get love. Of what you might do to get revenge if you lost love.

In genre terms, there’s also the fact that it’s fucking weird to fall in love with someone, and realize that you are actually agreeing to merge yourselves into one thing, with shared desires, a shared life. It’s this peculiar equation where 1 + 1 = 1. Two into one is a massive transformation. There’s also the way that falling in love feels: your heart races, you shake, you have the same reactions you might have when terrified. And the phrases we use: I’m giving you my heart. You belong to me. I’m always interested in taking those things and making them literal.

I’m kind of consistently amazed that love is often seen to be a less than ferocious topic, when in fact, it’s totally life-changing. It’s one of the big topics. Birth, death, love, lack thereof, monsters. Um, really, what else is there?

What’s coming up for you next?

I’m finishing up the sequel to Queen of Kings, which is set in the 16th century, and full to the brim with venomous creatures. I’m also deep into a YA novel, which grew out of a one-line piece of gorgeousness I happened on while researching that sequel. And I’m writing a short story, which involves a ghost and some badass women. I like badass women. Most of my monsters are women. So are most of my heroes. Sometimes both at once.

Lightspeed Assistant Editor Erin Stocks’ fiction can be found in the Coeur de Lion anthology Anywhere but Earth, Flash Fiction Online, the Hadley Rille anthology Destination: Future, The Colored Lens, and most recently in Polluto Magazine. Follow her on Twitter @ErinStocks or at www.erinstocks.com. 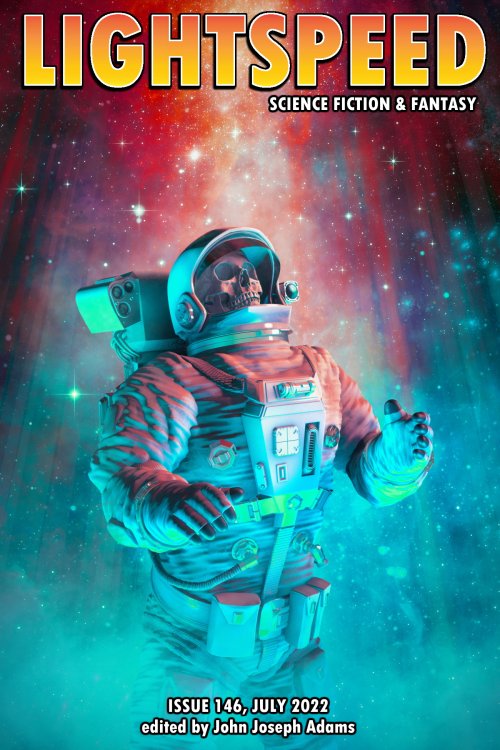