How did this story come about?

It’s silly, but the only reason I wrote this story is because I became irrationally attached to the title. I originally had an idea to write a story called “The Quality of Descent” that would be about a very long-lasting fall from a very high hot air balloon. There was going to be a storm of golden pollen that gave everyone clairvoyant abilities. I started writing this story and it was terrible — leaden, plodding, completely devoid of humor. It was so bad that there was nothing to rescue except the title. But I loved that title. So I started excavating the inside of my head for something the shape of that title. I’ve had, for years and years, a recurring dream in which I’m flying above a stage and then my massive, ridiculously white, picture-book wings fall off. I went from there.

This story has a great title. What are the qualities of descent you think of when you see this title?

I’m a little obsessed with the physical act of falling. There’s something about it that’s beautifully, dreadfully naked. It’s hard to maintain any sort of mask or fakery when you’re taking a surprise plunge toward the ground. My sister, Shannon, and I once filmed a few of our friends as they pretended to be shot. The most interesting part was when they fell down. No matter how cheesy or slapstick or dramatic they made it, something about their fall was a reflection of their personalities.

So, I guess when I think of the qualities of descent, I think of bareness and that moment of helplessness (not necessarily a pitiable or unhappy thing) when a body has given in to falling and is only capable of being itself while it waits for the ground to hit.

Do you have a favorite illusionist or magician? And if so, can you tell us a bit about them and why you are drawn to them.

I love Teller. I’ve seen the Penn & Teller show live once and Teller does this trick in which he pulls coins from unexpected places on an audience member’s person and drops them into a large fishbowl full of water. That part isn’t particularly unusual, but, at the end of the trick, he reaches into the water and stirs it with his hands and, in the next moment, all the coins turn into goldfish. It’s such a gorgeous surprise. You can’t help but be delighted. I like that his tricks make me feel something beyond astonishment. They feel like good theater or dance, like everything is operating on different levels of reality, metaphor, and memory.

I also have a friend who is an amateur magician. His name is Harry Bolles and he’s always fiddling with cards or coins in spare moments at bars or restaurants or while sitting around and chatting. I so enjoy watching the constant craft and obsessive practice that make tricks work. It’s like watching the physical equivalent of telling a story. The magician has to get everything so smooth and have it make such perfect sense that he convinces someone else’s eyes and brain that he has bent reality and is telling the truth.

If you’re in the mood for a YouTube rabbit hole, I recommend looking up: Teller, Cardini, and Lennart Green.

I love all the doodles, sketches, and cartoons on your blog. Did you do any drawings while you were working on this story?

Thank you! Drawing is my lollygagging relaxation activity. It feels both fiddly and functional at the same time. I don’t think I drew much while I was writing this story, but I did doodle a little when I was revising it. Sometimes, drawing parts of a story out as if I were going to make it into an illustrated book or comic really helps me clarify how I want a story to feel. I tend to imagine my stories very visually, almost as if I were watching a movie, so working out a bit as an actual visual thing on a page is satisfying. I also try to write out the words from the bit I’m doodling as beautifully as I can, and that makes me pay attention to my habit of long-winded excess and figure out what I really want to say.

I once talked to Daniel Clowes, who is an incredible graphic novelist. He told me that lettering by hand is extremely important to him because he sometimes doesn’t know what word should come next until he’s in the act of writing it on the page, inside the world of the comic.

(If you’re unfamiliar with Clowes, but interested in storytelling, rush yourself off to a bookstore or library and check out The Death-Ray. It’s a masterful piece of storytelling that does shocking things with structure and the reader’s sympathies. Reading it made me exclaim, “You CAN DO THAT?” at embarrassingly regular intervals.) 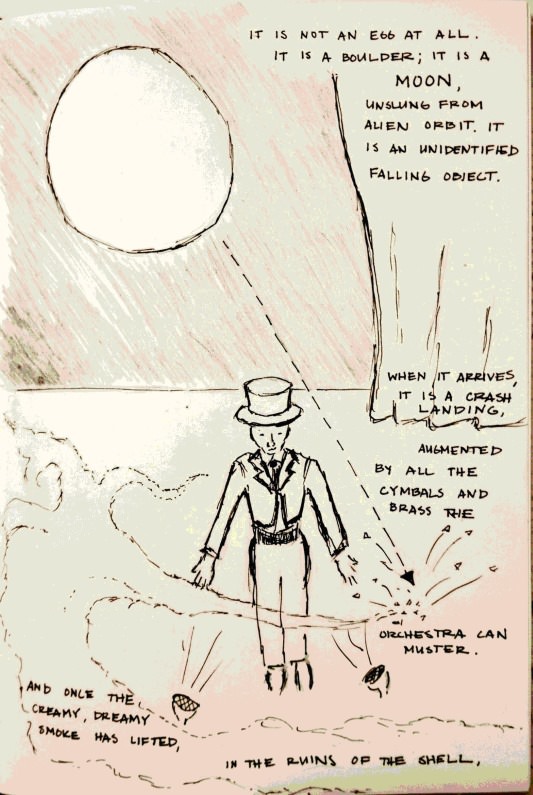 This story is so slippery it’s hard to write questions about; it’s easier to experience than articulate. Let’s hope there’s a question in amongst all these words! “The Quality of Descent” is an interesting exploration of relationships, intimacy, and illusion. We start with a fall that isn’t really a fall that leaves us floating. There’s falling in and out of love, falling from grace, a sort of fear of falling, and the actual fall that becomes a float. The protagonist feels weighed down by life as he observes a more numinous and floating world. Do you think he ever learns to fly?

I don’t know! I have a rather limited imagination sometimes. When I finish writing a story, I stop thinking about the characters in any other context except the one I’ve left them in. Maybe it’s a sort of laziness or placidity, but I’ve never been someone who dreams up continuations for stories I’ve read. Characters and story are tied up together for me, and the thought of dragging one out of the other seems deeply weird and awkward.

So I have no idea. Though I’d be curious if anyone else does. I have a feeling that if I did my job properly as a storyteller, readers might have an opinion about this.

Did you make any interesting discoveries while you were writing this story?

It took me a very long time to finish this story. I wrote occasional drafts of it over several years. Seriously! I’d write a draft of it, send it out to a magazine or two, get distracted by other things, and forget about it for months or a year. My (immeasurably patient) friend Kat Howard read, I think, three different versions of it, each one ages and ages apart.

I am a lazy, lazy writer. And slow. Glacially slow.

This could also just be me making excuses for my incredible laziness.

You draw, write, dance, and manage your own dance company. Do you find that different forms of creativity lend themselves to different times of day? How do you structure your time?

For the most part, dance dictates my schedule because it always involves other people, time, and resources that need to be coordinated. Dance is greedy. The physical practice of it is necessary and inescapable, and if you’re working with other people, you have to be in the studio with them for hours and hours. You can’t learn your own part and then come together for a few rehearsals before a show. I’m very lucky to work in ensembles of incredible collaborators. Being in the same room with intelligent, generous, inspiring people and making something together is the most deeply satisfying thing.

I usually take ballet class in the mornings, rehearse in the afternoons, do administrative work in the evenings, and fit everything else in the cracks. Sometimes, writing is a relief because all I need are an idea and something to write with.

Are there any other projects you’d like to tell us about?

Yes! My sister and I are working on a dance adaptation of Sergei Prokofiev’s Peter and the Wolf with our dance company, Sharp & Fine. We are collaborating with a mixed cast of dancers and jazz musicians, and having the musicians move alongside the dancers. It’s been a very challenging process, but I’m terribly excited about it. All the artists we’re working with have a surfeit of talent, brains, and curiosity, and I love watching and listening to them so much. It’s going to be a fun (and unusual) show, so if you are in the San Francisco area October 23-26, please check it out (see sharpandfine.com/peter-and-the-wolf for information)!

I’m also working on a short story about werewolf-ish women and a trumpet player, but I have no idea where that is headed yet.

Liz Argall’s short stories can be found in places like Apex Magazine, Strange Horizons, Daily Science Fiction, and This is How You Die: Stories of the Inscrutable, Infallible, Inescapable Machine of Death. She creates the webcomic Things Without Arms and Without Legs and writes love songs to inanimate objects. Her previous incarnations include circus manager, refuge worker, artists’ model, research officer for the Order of Australia Awards, farm girl, and extensive work in the not–for–profit sector.