In this month’s column, I review Empire of Sand, by Tasha Suri; How to Fracture a Fairy Tale, by Jane Yolen; and The Future is Female anthology (edited by Lisa Yaszek). 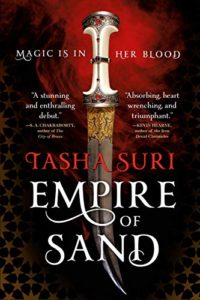 Tasha Suri’s debut novel Empire of Sand is lush and gorgeous and is a wonderful first book into a series based off of the Mughal Empire in India.

Mehr is a half-Amrithi, half-Ambhan woman born into privilege. The daughter of a governor, she is taught that her Amrithi heritage is barbaric and to be feared. However, her blood is also known to keep away the daiva, spiritual creatures feared by the Ambhan. She keeps her heritage alive by dancing, which in turn enables her to survive the storms of dreamfire raining upon the land.

In spite of her father’s carefulness, Mehr captures the attention of the Maha, the leader of a group of mystics serving the Emperor. The Maha forces her to marry Amun, another Amrithi who is oath-bound to the mystics. Mehr learns that the Maha plans to use her and Amun for The Rite of the Bound, an unholy ceremony that will gather the gods’ power to himself, and unless Mehr finds a way to stop him, the entire world could suffer the consequences of anger from the gods.

This story has everything: a badass princess, romance, the apocalypse, and all of it against a luscious backdrop that calls to mind Hindu folklore and rituals. Mehr is pragmatic, yet fully aware of her privilege, always keeping her eyes open for any opportunity that would give her an advantage. Had she been born in a lesser station, you could see her as a shrewd businesswoman. Mehr is also biracial, and the novel does a wonderful job in showing her conflicted feelings towards both her heritages, but also being able to meld both cultures in herself. The relationship between Mehr and Amun does not feel forced, despite the circumstances, but feels natural.

What deeply impressed me, however, was its views of vows and marriage. The Amrithi do not marry, yet they hold vows as highly sacred—to the point that breaking one is anathema. The Maha is able to enslave Amun to himself with vows, and he hopes to do the same to Mehr. But there is a difference between being put in a marriage ceremony and giving a vow to another person out of trust and love. It is beautiful to see how the relationship between Mehr and Amun flourishes despite their being forced to be together.

I also loved how the Amrithi fight to survive in a world that sees them as filth or mere tools to keep the fearsome daiva away. A subplot follows Mehr’s aunt, Lalita, who changes her name and background to hide her heritage. Other Amrithi, such as Mehr’s mother, choose to leave society behind entirely, their fates unknown. Suri navigates the exploration of cultural identity, showing how there are no easy answers to how one chooses to honor their heritage. And yet, with Mehr, she also proves that honoring your culture can be a form of resistance, and in the case of Mehr’s dancing, a weapon and a healing influence.

Suri drew upon the Mughal Empire to help shore up court politics, and she mentions at the interview at the end of the book that the “Amrithi rites and sigils were influenced by Indian classical dance (specifically Bharatanatyam) and by the depiction of the god Shiva creating and destroying the world with dance and cosmic fire.” Indeed, the dancing in this book is beautifully woven into both an act of remembrance and defiance for the Amrithi.

I highly recommend reading Empire of Sand, and I look forward to Suri’s continued foray into this world. 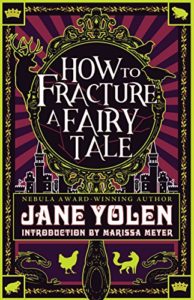 Exactly one year ago, I reviewed Jane Yolen’s The Emerald Circus (bit.ly/2NMznQd), which I liked, but the stories were hit or miss with me. Now she has a new collection, How to Fracture a Fairy Tale, which I immediately gobbled up because I happen to be a sucker for fairy tale retellings.

Yolen starts off with advice on how to actually fracture a fairy tale, which is useful for writers wishing to try their hand at retelling tales. She then dives into the tales themselves, mainly retellings of folk tales, but with a couple familiar Grimm’s tales among them. The story of Cinderella, for instance, which Yolen reimagines into “The Moon Ribbon,” about a girl who escapes her stepmother with a ribbon from her dead mother, and “Cinder Elephant,” which tells the story from a fat-positive point of view.

Some stories are just straightforward tales that have very little changed in them, such as her telling of Asian folktales “One Ox, Two Ox, Three Ox, and the Dragon King” and “The Foxwife.” Some are rearranged in ways you don’t expect. “Happy Dens or a Day in the Old Wolves Home” has all the wolves in folklore now residing in an Old Wolves Home and tell their own versions on what happened to them. “Sleeping Ugly,” a riff on Sleeping Beauty and Cinderella, is a hilarious tale with a testy fairy godmother who deserves her own story.

There are also a couple of tales that draw directly from Yolen’s Jewish heritage. “Slipping Sideways Through Eternity” is a sobering read connecting the Hebrew version of Elijah with the Holocaust, whereas “Granny Rumple” is an actual tale within Yolen’s family told on the framework of Rumpelstiltskin, and it is not a cheerful story. Indeed, several stories in this collection are rather bleak, but so well told that they sit and make you think.

As in her previous book, Yolen includes story notes and a poem for each of the stories she wrote. Overall, I enjoyed this collection a lot more, and I will be digging more deeply into her stories to learn how to fracture fairy tales on my own. Also, I didn’t get to include this in my last review, but if you enjoy Yolen’s poetry, she has a mailing list where you can sign up and receive a daily poem from her (bit.ly/2xkMChk). 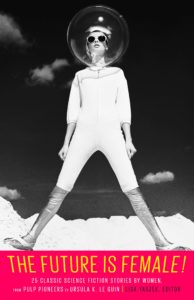 I will tell you a secret now—growing up, I never knew there was such a thing as feminist science fiction. The teenage me never read Ursula K. Le Guin, or Joanna Russ, or James A. Tiptree. In this collection, Lisa Yaszek gathers twenty-five stories from the early pioneers of science fiction who are all women, whether they wrote under their own names or under male pseudonyms.

The stories in this collection were remarkable, brilliant, and even mind-blowing as I read them from a contemporary lens. The stories tackled themes such as the consequences of overpopulation; the opening story (Clare Winger Harris’s “The Miracle of the Lily”) explores a futuristic Earth devastated by insects. Alice Glaser’s “The Tunnel Ahead” has a family whose lives are regimented by space (and gives an interesting window on extroversion and introversion that is way before its time). Certainly there are stories centered on motherhood. Alice Eleanor Jones’ “Created He Them” is bleak yet powerful, focusing on a housewife who is trapped in her marriage and motherhood, but doesn’t dare leave. Judith Merril’s “That Only a Mother” has a protagonist who claims motherhood for herself, despite what her progeny looks like. “Another Rib” by John Jay Wells and Marion Zimmer Bradley has men giving birth, exploring both gender and sexuality.

There are stories about the tension between men and women. Of course, James Tiptree, Jr.’s “The Last Flight of Dr. Ain” is included here, but Doris Pitkin Buck also explores this in “Birth of a Gardener,” in which a male scientist condescending to his wife gets a taste of his own words. Not all the stories focus on women. “In Hiding” has a male psychiatrist coming across a very bright boy who must hide his intelligence, and the joy of their mentoring relationship. “The Inhabited Man” briefly tracks the stories of three astronauts going their separate ways and has a final paragraph that led me to scramble to read the story over again in a new light. There are even a couple of stories that deal with racism. Leigh Brackett’s “All the Colors of the Rainbow” deserves a column of its own. While the premise is deceptively simple—aliens of a different hue visit Earth—the story of these aliens traveling across the southern United States and coming across sundown towns is terrifyingly familiar in today’s atmosphere of pushback against diversity. Anyone who says that science fiction should just stick to space stories needs to read this tale.

In fact, this whole collection proves that women science fiction writers wrote more than just space stories, but used prose to explore and process the issues of that day. The only flaw in this anthology is that all the women, as far as I can tell, are white. I know that there have been black science fiction writers whose stories are now being uncovered from obscurity. Perhaps a people of color classic SF anthology is the logical next step.