Greetings, readers, and welcome to yet another installment of glorious wordgrubs looking to nestle in your squishy brain folds. Before I get to the reviews, though, I’d like to take a small moment to let you know that I wrote a book! It’s called Otaku, it’ll be out in March (published by Tor), and I am both excited and nervous beyond belief to share it with the world. I’ve been reading SFF ever since I was a kid, and to know that something I wrote will end up on a shelf next to all the titles I devoured growing up is an amazing feeling, one I honestly never expected to experience.

However, this is a column where I review books not written by me, so rather than talk your ears off for the next ten paragraphs about my awesome love/hate letter to gaming culture and societal ills, which would no doubt drive my editor into frothing madness, I’ll just finish up this intro with an observation that I truly believe—you have to love books if you want to write one.

You have to love the idea of sharing someone else’s perspective, of looking at the universe through different eyes, and whether you recognize familiar shapes or behold strange and terrible new vistas, the point is that for however long it happens to be, you’ve stepped outside your own head, and once you return, you’re never the same again. You have to love other voices, the way they shape and mold the structure of information, because those voices are the ones who help you find your own. Above all, you have to love the courage that drives someone to declare to an uncaring universe, “This is what I care about!”, because it gives you hope that you can do the same.

To be honest, that’s what I like most about doing these reviews—being able to highlight, however briefly, something that someone created from nothing, something a human being put effort and tears and exhaustion into with no guarantee that anyone else would notice or care about it, and say “I care about this, too.”

And so, without further ado, let’s get to some book reviews! 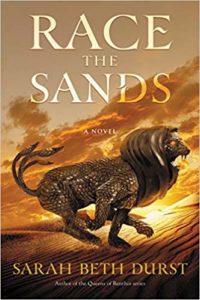 Those who are regular readers of this column will notice that the name “Sarah Beth Durst” has appeared here before, and for good reason—her Queens of Renthia series is fantastic, and I highly recommend you go check them out. Race The Sands, however, is an entirely new universe created by Durst, and where Renthia felt full of forest shadows and water, Becar is a land of blazing sun and stone, an old desert capitol built around an even older river. In Becar, rebirth is guaranteed, though what a person comes back as depends on their actions in their previous life. It might be a tortoise, or a termite, or even a human again, but the one thing all inhabitants wish to avoid returning as is a kehok—terrible monsters with no chance of redemption that only the darkest souls inhabit, doomed to forever wander the desert sands.

Naturally, the people of Becar decide to race kehoks as a national past-time, because Durst obviously understands the basic premise of humanity (which is to ask, “well, why shouldn’t I ride the vicious murderbeast?”) and the only way a kehok can break their endless cycle of damnation is for the human riding them to win the grand Becaran Races. Of course, riding a kehok takes a singular mastery of will, and failure usually means you get eaten, so only the determined or desperate need apply.

Race The Sands is told with Durst’s usual flair for deep emotional connections intermingled with people getting gnawed apart by ravenous mystical creatures, and the story moves along at a brisk pace, carefully interweaving the lives of multiple characters to present a full picture of Becaran society across all aspects, from disgraced kehok trainer to the emperor-in-waiting himself. Also as usual, Durst does a fantastic job of making the reader care about each and every character, while giving them the freedom to act in surprising, but universally human ways.

I really enjoyed reading this book, and am eagerly looking forward to introducing my daughters to it when they get a little bit older, because the area where Durst really excels is writing complex, strong, inspiring female characters who aren’t afraid to stand up for what they believe in. Overall, this is another excellent entry from an excellent author, and I hope she continues writing more books in the Becaran universe.

Read if: you like some karma in your fantasy; you’re not afraid of change; you would absolutely watch monster NASCAR on ESPN the Ocho. 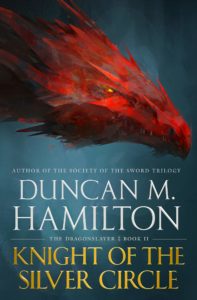 The next book I have for you is Knight Of The Silver Circle, the second entry in the Dragonslayer trilogy, and you’ll want to read the first book before getting into this one (but that’s okay because the first book is pleasantly affable as well). In Knight Of The Silver Circle, we rejoin our protagonists, Guillot and Solene, as they try to make sense of a world where dragons have returned after vanishing for thousands of years, bringing with them the threat of indiscriminate terror. However, dragons aren’t the only thing Guillot and Solene have to worry about, as the ambitious Prince Bishop Amaury continues his relentless march to consolidate power and usher in a new age of magic, all for the good of the people, of course.

The fun thing about the Dragonslayer books is that they’re easy to read while still providing just enough uncertainty that you’re never quite sure how the protagonists are going to make it through their most recent mishap without everything going completely in the bucket. I would liken them to the beach-reading fantasy equivalent of a Dean Koontz or Tom Clancy novel, in that you know things will end up okay, but there’s plenty of space for events to go sideways in unexpected ways while you work your way toward the ending.

If there’s any complaint to be made, it’s that Hamilton is uneven in how he treats traumatic experiences—some are consigned to a quick disappearance off-screen while others are dealt with in well thought-out detail, but there’s no real rhyme or reason as to which one you’re going to get, even though all of them relate to main story beats. It feels as if Hamilton had certain scenes in mind where he knew the emotional cost of the events taking place, but others were filled in after the fact, though none are jarring enough to detract from the story as a whole.

That being said, it’s a minor quibble at best, as these books trend more toward the David Eddings spectrum of fantastical fantasy than the George R.R. Martin bloodbaths we’ve become accustomed to on HBO, though there are still enough court machinations and double-crosses to keep all but the most jaded reader captivated until the last page.

Read if: you like dragons; you enjoy swashbuckling Dumas adventures; you still have a core of gallantry peeking through a world-weary exterior. 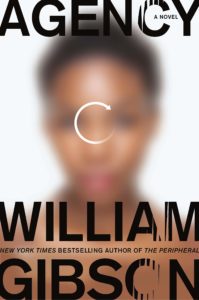 For our final book, I have a real mindmelter, and it’s William Gibson’s latest: Agency. For those unfamiliar with Gibson’s work, he’s one of the seminal creators of what we now consider cyberpunk with his debut smash novel Neuromancer, but to regard him as just an ’80s author who predicted the Internet is to ignore all the other targets he’s set his sights on over the years. From the surveillance state alt-right cobwebs of his Blue Ant trilogy, to the steampunk stylings of The Difference Engine, to his most recent foray into the world of haptic technology and societal collapse in The Peripheral, Gibson has proven himself an adept connoisseur of the world right around the corner we don’t know is about to arrive.

Set in the same universe as The Peripheral, Agency doesn’t require you to have read Gibson’s second-most recent novel in order to understand everything that’s going on, but you really should in order to fully grasp certain key characters, as well as the technologies involved (plus it’s a William Gibson book; go read it, you heathen). Without spoiling things from The Peripheral, Agency follows a new cast of characters involved in the birth of a fully autonomous AI (artificial intelligence), and the choices they make in a world poised on the brink of disaster—one that even the most out-of-tune citizen will recognize as a direct parallel of our own, for better or worse.

For me, one of the things that makes Agency so unique and terrifying is that this is an author who has a proven track record that would put Nostradamus to shame, and now he’s diving deep into a subject I’m not sure enough people have considered seriously—the rise of an emergent AI, along with the cumulative effects of climate change and income inequality. In my mind, I know the jackpot is on its way (just look at the most recent UN report on climate change or talk to a federal risk assessor if you really want to know how screwed we are as a species), but in my heart I still hold out hope that we can find a way to avoid it; a hope shared not just by the current inhabitants of Agency’s branch, but those advising them from the disconnected future.

This book, like all of Gibson’s books, is the kind of story you read multiple times, over multiple stretches of time, and each time you approach it there will be something pertinent to your current state of being (though perhaps pertinent in a way you wish remained relegated to fiction). My only critique, and it’s a miniscule one, is that the writing style in Agency is slightly more opaque than previous novels, necessitating more measured/multiple approaches to fully grasp all the concepts contained within, especially when dealing with specific military/intelligence jargon, but when dealing with subjects as heady as AI and time travel and the particular stupidity contained within Silicon Valley, there likely don’t exist enough pages to fully encapsulate the ideas Gibson wants to explore.

At the end of the day, all I can tell you is that this is a book you should read, no matter how long it takes you to get through it, because, like Neuromancer, it’s a future I think we’re well on the way toward inhabiting. Some details might change between now and post-jackpot, but the numbers have already been drawn, and we’re holding the ticket. I just hope it’s Eunice we end up with.

That’s it for this month’s reviews, hope you all have an excellent new year! Study your history, otherwise you get to repeat it in new and exciting ways!

Other New Books That I Thought Were Interesting But Did Not Have Space to Review: