This month, I want to take a look at how queers destroy science fiction through seeking, building, and defending community. The following books are all deeply concerned with the families we choose and the connections we build together, amongst each other, to survive worlds hostile to us. 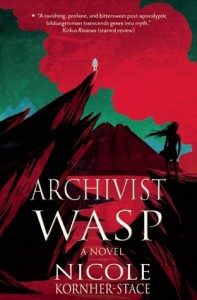 An Archivist has two jobs. The first is to hunt and catch ghosts in order to learn about the precataclysm past from them; the second is to defend her life and position against “upstarts” — the other girls marked by the goddess Catchkeep’s claw-shaped scars at birth — once a year. Wasp has been Archivist for three years, and wants nothing more than to escape a dismal life of killing her sisters and obeying the Catchkeep-priest — so when an unusually powerful ghost asks her to help find his former partner in the underworld, she agrees. But, as is so often the case with the underworld, she finds both more and less than she bargained for.

More than anything else, this book is sharp. You could cut yourself on the prose — Wasp’s world is one of thorns, knives, edges of thick, broken glass, a constant background-hum of pain that sometimes swells into a shout. Wasp’s perspective absolutely thrums with tension and violence, but also aches with a fierce, hollow loneliness to break the heart. The longing and gratitude for the smallest beginnings of true friendship make the betrayals more vicious, and the stakes just keep rising. I burned through this book in about three hours, desperately rooting for her.

It’s also a brilliantly constructed narrative and world. The gods are cruel and absent. The underworld is a maze in layers, a twisting, turning palimpsest, one that allows Wasp to descend almost archaeologically through time by literally experiencing her ghost-partner’s memories. The pre- and post-apocalyptic worlds reflect each other in shards and fragments, all the more powerful for being subtle, for their resistance to being spelled out.

It was also keenly refreshing — especially in something that’s ostensibly YA, where the Love Triangle of Doom is so annoyingly pervasive — to find a book in which all of the strongest, primary relationships are friendships; where friendship has the narrative, motive force usually reserved for sexualized romance. I very much wanted to see the A in QUILTBAG represented in this column, and this is a fine example: while the connection between the ghost and his (female) partner is intense and loving, it is never represented as sexual, and sex is in fact completely irrelevant.

I’ve heard rumors of a potential sequel in the works, which I would welcome because I love Wasp, and because the world Kornher-Stace has invented is fascinating — but Archivist Wasp also stands perfectly, satisfyingly well on its own. 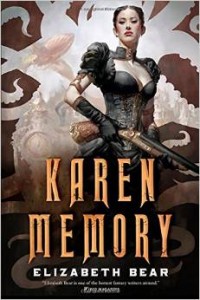 It’s 1878, the West is Wild, and the Hôtel Mon Cherie is the respectable home of respectable seamstresses, including our narrator, Karen Memery — and so long as she and the other ladies all pay their $50 a week in seamstressing taxes, the city “don’t care if your sewing machine’s got a foot treadle, if you take my meaning.” But everything changes when the Hôtel is crashed by two women escaping Peter Bantle, a nasty piece of work who deals in human trafficking and runs an illegal brothel by the docks, kicking off a many-armed octopus of an adventure plot that includes U. S. Marshall Bass Reeves, mysterious mind-control engines, and more feats of derring-do than you can shake a dime-novel at.

Given how many reviews of this book include the word “rollicking,” I was expecting something rather more light-hearted and slight than what I got: truly riveting voice work and a wealth of wrenching detail, the kind of precision and care that makes you feel like you’re looking at one of those glass-covered pocket-watches that lets you see all the gears. Karen’s perspective is warm, generous, and kind, working hard at being honest with herself and doing right by others, and it’s a joy to spend time with her.

I was also fascinated and delighted by the diversity of the cast, including characters who are black, Chinese, East Indian, Comanche, and trans. Karen herself is queer, and her budding romance with another woman is crucial to the story. This diversity never felt forced or unusual; everything about Bear’s chosen setting recalls Mary Robinette Kowal’s principle of “subtracting homogeneity for the sake of realism” (bit.ly/subtracting-homogeneity). I also never felt that the characters were reduced to those identity-markers, though Karen’s first-person narration means that any access to their interiority is necessarily limited and filtered through her perspective.

My experience of reading this was perhaps a bit odd, in that after reading Archivist Wasp — with its privation, cold, and pain — I wanted to dwell in the deliciousness of market descriptions, Karen’s enjoyment of her community, and the small kindnesses exchanged between her and her fellow seamstresses. I would have happily read a novel’s worth of Karen talking about how she stitched her own journal together or braided her own rug, or how much she enjoys Connie the cook’s food — but this is an adventure story, and that means threatening those comforts as often as they appear is a feature, not a bug. 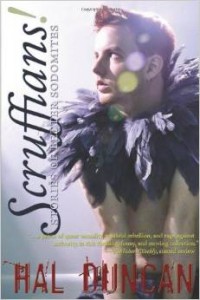 Hal Duncan began his Scruffians project as a form of “story-busking,” releasing the stories online for free (bit.ly/scruffians) if donations for them reached a certain threshold. These stories, along with new material, are collected in Scruffians! from Lethe Press.

Scruffians are indestructible children of varying ages and backgrounds who’ve taken “the Stamp,” an operation that “fixes” them in place by raising their souls into visible glyphs on their bodies. Once Stamped, a Scruffian can’t die or be changed from their Fixed form: cut off a finger, for instance, and it’ll grow back. Making Scruffians has proven useful over the ages for Children’s Crusades, work houses, factories — but at some point, the Scruffians stole the secret of making the Stamp, figured out that changing the Stamp changed their bodies, and fought back. Now, any rag-tag band of rascals could be Scruffians, roaming streets and byways, feral and froward, and inviting you along for the ride.

This is a motley assortment of stories and story-telling methods entirely appropriate to its subject matter. Scruffians have their own rituals, mythologies, gods, and histories, and Duncan whirls among them like a spinning top. Everything queers and is queered, from language to history to mythology. The Scruffians’ enemies are principally the groanhuffs (say it out loud), and their tale-telling claims a magpie’s treasury of stories, from Biblical to medieval to classical, as they spell out a shadow-history to what’s familiar, recorded, accepted, or known.

There is nothing straightforward about this collection: straightness is groanhuff stuff, and therefore anathema to Scruffians. The stories in this collection are sometimes stacked within twisting frames, sometimes looping back to refer to half-mentioned incidents, sometimes a catalogue like “An Alphabetcha of Scruffian Names” — one of my favorite pieces, offering an alphabetised list of Scruffians and snapshots of their backgrounds. What they lack in straightforward narrative, they more than make up for in relentless inventiveness, fierce heart, and filthy humour — and at its core, each Scruffian story contains a compass needle pointing towards community, towards joining hands with the used, the broken, the unbreakable, and defending themselves and each other with a rhyme.