This month for my book review column, I found myself drawn to three books written from around the planet: Gene Mapper, by Taiyo Fujii (Japan), Signal to Noise by Silvia Moreno-Garcia (Canada/Mexico), and A Planet To Rent, by Yoss (Cuba). Something that has personally interested me is how the internet has begun to unite the world’s science fiction community, and how we’re seeing a huge number of works reaching US audiences (and other international markets) that bring an entirely new perspective to genre circles. 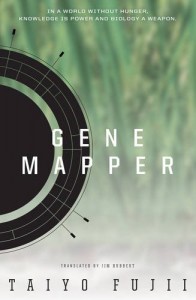 While reading Gene Mapper, I got the sense that reading this book was like reading William Gibson’s Neuromancer for the first time: it was like an electric shock to my brain. This novel is full of vivid ideas for how the future will look, from augmented reality to genetic engineering. In it, a freelance gene mapper, Hayashida, is informed that there’s a problem with a crop that he worked on: SRO6 is doing something odd. The colors aren’t right, and it seems like this grand experiment that he’s been a part of is on the verge of failure. The crop is a genetically modified—a distilled plant—type of rice that will help to feed billions of people across the world. It’s a PR coup for L&B, his benefactor company, provided that it works. As he heads out to the field, he works with field technicians and hackers to uncover the malicious reason behind the gene collapse, and discovers something more sinister and strange than he could have imagined.

Fujii throws you into the deep end of this world, and you’re along for the rush as Hayashida gets pulled into a much larger conspiracy. He’s brilliantly imagined the world and the future history that it took to get to the story; for a book so short, he’s packed a lot of information in, and I hope that we’ll see him continued to expand upon it. (As an aside, Lightspeed recently published a short story from Fujii, which you can read here: lightspeedmagazine.com/fiction/violation-of-the-truenet-security-act.)

There are some obvious comparisons to other climate change/biological science fiction novels such as Paolo Bacigalupi’s The Windup Girl, but where Bacigalupi’s novel trends pessimistic, Fujii’s novel brims with technological optimism. Fujii seems to revel in the possibilities of what technology can do, and it’s an interesting book to read in a climate where entire countries are banning GMO crops and states within the United States are mandating that GMO products be labeled. Fujii’s characters are clear where they stand: what they’re working on will feed billions of people, even as they acknowledge that in the past, there were some problems along the way.

I really enjoyed this book, and it’s one I think that I’ll return to at some point, if anything just to take in the world and to see what I might have missed as I read along. People decry science fiction for being too dystopic or depressing: Gene Mapper is the perfect antidote for that. It’s dark, but Fujii’s outlook is bright and optimistic. 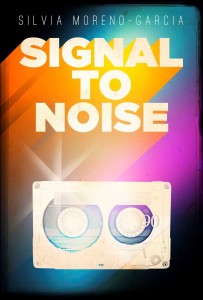 Silvia Moreno-Garcia’s debut novel Signal To Noise is a brilliantly imagined realistic fantasy set between 1989 and 2009 in Mexico City. The story begins when Meche returns home after being away from home for nearly two decades. Her estranged father has died, and upon her return, she reunites with a pair of school friends, bringing back a number of painful memories that led up to her leaving the country. As high school students, Meche and her two friends, Sebastian and Daniela, learned how to use magic, and they set about trying to fulfill some of their base desires—they want more money to go out to the movies and shop—to some more serious desires, like falling in love, healing a sick relative, or revenge.

Signal To Noise does a fantastic job with its characters: Merche is abrasive, Sebastian is alone, and Daniela is timid, each with their own issues as they come together. Moreno-Garcia deftly weaves these characters back and forth in time, slowly uncovering a larger narrative in which Meche’s estrangement from her friends and her family become clear. The literary device here is excellent, and as the book hammers on, there’s a sick sense of dread for what’s to come, and the plot falls neatly together as the final pages come to a close.

What I appreciated here was that Meche and friends aren’t here as part of an overarching narrative about magic, complete with consequences that will shake the world to its foundations: this is an intimate character story which each character, through their own flaws and problems, creates for themselves.

A PLANET FOR RENT
Yoss 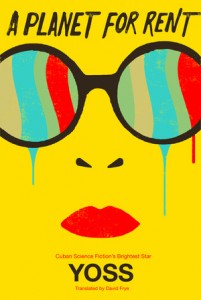 The third book for this month is one of the first translated books to come out of Cuba, right as relations between the Latin American and the United States are beginning to thaw. A Planet For Rent, by Yoss (the working name for José Miguel Sánchez Gómez) comes at a time when it seems as though anything connected to Cuba is politically charged—it’s hard to separate out the political context for the worlds that he depicts, and that’s a bit of a shame, because this is probably one of the more entertaining science fiction novels that I’ve picked up in recent years.

Politically, there is some allegory here, which Yoss covers at a high level when he outlines what happened to Earth: a collection of alien civilizations has watched humanity for centuries, making contact when we were deemed “mature” enough to withstand the shock. It didn’t go so well: humans fought back and started a nuclear war, nuking Paris before the collective cracked down. They made Africa vanish completely, as a lesson to the rest of humanity, and subjugated the rest. Earth reverted back to its natural state as a sort of tourist destination for the larger galactic civilization. In the aftermath, humans are only permitted to leave Earth on occasion, and only then, they’re forced into servitude or outright slavery. The remaining humans back on Earth make their way by selling themselves in various ways: as artists, as prostitutes or as “horses”—empty bodies for aliens to walk around in. Some try to escape through rickety, homemade spaceships. This isn’t a subtle book, and it’s brimming with a level of cool anger.

Ignoring the political elements that inform this book, this is amazing science fiction. Yoss has created alien worlds and races that have few equals in science fiction, and he paints a vivid picture of Earth through a connected series of shorter stories. His humans— a prostitute, an artist, a soldier, an athlete, and others—are angry at their situation, trapped in an oppressive system that very few can escape from. It’s hard not to read into the story here as an allegorical Cuba, a small, defiant island fighting against the world at large. A Planet For Rent is a fantastic work of fiction, equal parts entertaining, shocking and horrifying. One can only hope that with the easing of restrictions between the US and Cuba, we’ll see more from some of our neighbors in the Caribbean.

After reading through these three brilliant short novels, I’ve found myself thinking more about how much bigger speculative fiction is than I ever would have realized. Science Fiction emerges from the imaginations of dreamers across the planet, bound not by literary heritage, but by the ability to see the world in a different fashion. From Japan to Cuba to Mexico, each of these novels looked at the world in ways that never would have occurred to me sitting here in Vermont, whether it’s an future run by optimistic gene hackers, a trio of teenagers in Mexico City, or of desperate refugees from Earth. Reading this group of stories has widened my horizons just that much more, and for that, I’m thankful.