We’re approaching the harvest time of year, and I’m thinking a great deal of roots and branches, literal and metaphorical: the depths and thirsts of growing things; heritage as both burden and inheritance; root servers; and the distances we bridge between past and future through the choices we make and the paths we pursue.

The following books partake of all these things; they’re also all utterly immersive, gripping as ivy, impossible to put down once begun. I recommend approaching them with caution and several hours to spare. 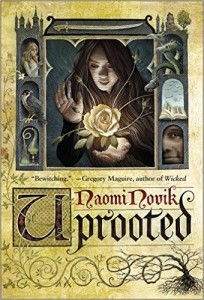 This is the best book I’ve read so far this year, and that’s saying something—especially considering how excellent are the other books in this column alone.

The kingdoms of Rosya and Polnya are at war, and between them lies a malevolent Wood, from which dreadful beasts and magical illnesses periodically emerge to plague the people. In Polnya, the villagers bordering the Wood are protected by a wizard called The Dragon—whose price for protecting them is the removal of a beautiful young woman every seventeen years to live with him in his tower as a servant. The women, once chosen, never return to their villages.

Against all odds, the Dragon chooses awkward, unkempt Agnieszka of Dvernik over her accomplished and presentable best friend Kasia, because Agnieszka accidentally reveals a capacity for performing magic. Consequently, the Dragon is compelled to try and teach her the art—but their styles clash as much as their personalities, while the Wood grows more and more restless, and court intrigues threaten to engulf and undo them all.

This is the first book of Novik’s I’ve read, and it’s magnificent. It’s turned me into something of an Ancient Mariner, constantly compelled to try and explain to people all the marvels it contains, doomed to fail in the attempt every time. This is my third.

Briefly: The twin cores of this book are voice and character. Agnieszka’s first person narration is dynamic, winning, and fierce, driven by deep love for the family, friends, and village from which she’s been separated. Her love for Kasia, in particular, is beautiful, restless, complicated, challenged, and challenging, and like manna in the scrublands of female friendship in fiction.

But this is only part of the novel’s riches: Language and setting are faceted and wonderfully realised; the clash and resolve of various equals-but-opposites is by turns delightful and unsettling; and the resolution to the whole is profoundly satisfying, in a way that I miss experiencing, as it feels like some time since I read a fantasy novel utterly and perfectly complete in itself.

I’m calling it now: Uprooted will be on all the award ballots next year. 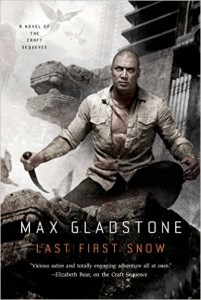 The Gods went to war with human sorcerers, and the sorcerers won: That’s the basic premise of Max Gladstone’s Craft Sequence, where reality itself is a contract between interested parties and the cost of doing business is measured in fractions of soul. Last First Snow—the fourth novel published in the Sequence but the first in its internal chronology—is his best work yet, revisiting the city of Dresediel Lex roughly twenty years before the events of Two Serpents Rise.

The Craft Sequence is an investigation and interrogation of our late capitalist modernity without resorting to allegory or axe-grinding; instead, the source of its fantasy is making literal all the metaphorical transactions we participate in over the course of our lives. For instance, Three Parts Dead features an evil academic literally siphoning the souls and intelligence of his students in service of his own reputation; Two Serpents Rise features a corporation that is literally a magical undead skeleton person. And Last First Snow is explicitly about redlining and gentrification—with magic, conspiracy, and wonderful characters.

Elayne Kevarian is in Dresediel Lex to negotiate the re-development of the Skittersill, a part of the city where the old gods kept the slaves they raised for human sacrifice. Warded by gods who’ve since been killed, the Skittersill is vulnerable to disease, attack, and all manner of demonic calamity, and Elayne is there to help replace the divine wards with Craft. Unfortunately for her and her clients, the people who actually live in the Skittersill don’t want their homes affected by uptown entrepreneurs who’ll raise rents and make it impossible for them to live there in the name of progress—and the judiciary won’t approve Craftwork in the area unless it’s co-signed by the community’s leaders.

Meantime Temoc—high priest of the old gods, last of the Eagle Knights, and Elayne’s former adversary and present friend—is trying to keep the peace and live quietly with his family in the Skittersill, in spite of a community clamouring for him to lead them into an increasingly hostile conflict with the King in Red, the sorcerer who broke the city’s gods on their own altars and seems excited to fight the God Wars all over again.

Besides the originality of its premise, the skill of its execution, and the scope of its project, Max Gladstone’s Craft Sequence is remarkable for being a series of stand-alone novels that mess with your reading brain in brilliant ways. Organised into a sequence that is less linear than mosaic, the order of publication has you reading book three before two and five before one, with four scheduled for publication next year. What this means is that you read Last First Snow knowing that terrible, terrible things are going to happen because you’ve seen their legacy in Two Serpents Rise—but the how and why of them is uncertain, ratcheting the tension up as effectively as violins in a horror film.

Gladstone’s prose makes me feel like I’m looking at the world through heavy crystal: Without calling attention to itself, it has weight, heft, elegance, and does great things with light. The characters he writes, the stories he tells, and the thoughtful, confident way in which he tells them are astonishing, especially as he continues to improve with each book.

THE WICKED + THE DIVINE VOL. 2
Kieron Gillen and Jamie McKelvie 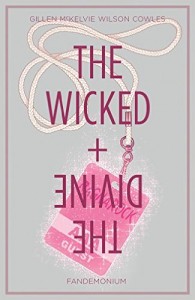 Every ninety years, twelve gods manifest from teenage bodies to become The Pantheon, to be loved and revered by the world—for two years only, before they die and kick the cycle off again. In our present moment, the gods are all performers, and Laura is their biggest fan. But when a god gets killed prematurely, Laura—along with Cassandra, a cynical reporter skeptical about the so-called gods—decides to investigate.

Volume one—The Faust Act—collected issues one through five, and while I loved it, I felt the art overshadowed the prose; there was so much gorgeous character design doing the storytelling work that Gillen’s expository dialogue sometimes felt overwrought. But volume two, Fandemonium, is astonishing, the collaboration seamless, and the art is just magnificent. I’d never yet had the experience of feeling hungry for art in comics after having seen it; as soon as I finished it (and shrieked at the shock ending, which, WHAT) I started it over again, to re-absorb every line and colour and expression of the characters. They haunted me for days after, the beauty and depth of them.

The shock of the last page was such that I’m seriously considering switching from reading the series in volumes to reading it in single issues, especially given how many more grace notes of content—alternate covers, commentary, etc.—can be found there. 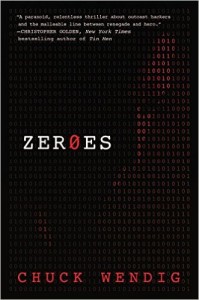 Five hackers—of different backgrounds, ages, and vastly different temperaments and motivations—are hunted down by the US government and forcibly persuaded to work on a secret project for the NSA, testing the electronic defenses of myriad corporations and nations to undisclosed purpose. But over the course of their strange work—already fraught because of the personalities at play, white and black hats clashing, trolls trolling—one question above all preoccupies them: What is Typhon? The need to find out goes from casual curiosity to imperative urgency as the stakes rise and the pace goes into overdrive in this tightly plotted, character-driven thriller.

I am out of practice with this kind of book. My heart could hardly take it. Halfway through, I was so tense and the threat level was already so high that I couldn’t fathom how there could still be two hundred pages to go. It also broke my narrative expectation: Three full acts take place within that first half, and it’s amazing to realize that there can be more, and fascinating to take stock of how conditioned I am by films in this respect. Here’s how you assemble the team; here’s how they learn to work together; here’s how they obtain their objective. But there’s a lot more going on here.

I appreciated how diverse and fully realized all the characters are—and how deliberately against type in many cases. The only thing that struck a false note for me was the Syrian-American character, Aleena, and the way the narrative characterizes her involvement with the Arab Spring; while I loved her and her motivations, the received-wisdom sort of approach to the issues at play in Syria clashed with how informed, intelligent, and invested she is. But that was only a small blip—the book is mercifully not about Syria, and what it is about is fascinating to discover along with the characters.