Angélica Gorodischer, daughter of the writer Angélica de Arcal, was born in 1929 in Buenos Aires and has lived most of her life in Rosario, Argentina. From her first book of stories, she has displayed a mastery of science fiction themes, handled with her own personal slant, and exemplary of the South American fantasy tradition. Oral narrative techniques are a strong influence in her work, most notably in Kalpa Imperial, which since its publication has been considered a major work of modern fantasy narrative. She has received many awards for her work, including most recently the World Fantasy Lifetime Achievement Award.

(Note: This interview was both conducted and translated from the Spanish by Amalia Gladhart. Also be sure to check out our Author Spotlight with Ms. Gorodischer, which focuses on her story appearing in this month’s issue. –ed.)

How did you become interested in science fiction/fantasy? Were there particular authors that influenced you?

Once at a friend’s house I saw a book called The Martian Chronicles. How odd, I thought. I opened it and I was trapped. I want to clarify that Ray Bradbury was never one of my favorite authors: He’s a little soft, kind of romantic, and, worst of all, moralizing. But The Martian Chronicles is a great book. And looking for similar things, I found the great writers of the 1950s and later.

How would you describe the role or position of science fiction in Argentina, or in Latin America more generally? Has it changed since you wrote Trafalgar?

In Argentina there were two or three writers who wrote SF: Pablo Capanna, the theory; and Eduardo Goligorsky, and others that I don’t remember, in narrative. In Latin America, no one save Daína Chaviano in Cuba.

Would you say there are fewer writers working in SF/fantasy in Argentina and Latin America now than when you wrote Trafalgar? If so, would you speculate as to the reasons for that shift?

I think you can safely say plainly that there are no writers of SF in Argentina or in Latin America at this time. I don’t know the reasons for that. I am not a narrative theorist. I am not an academic, nor a teacher, nor a B.A., nor a doctor, nothing. I am a writer of narrative and that’s how I hope and like to be thought of. So it’s impossible for me to speculate as to the reasons for the lack of SF writers today.

Is there, or has there been, a greater freedom from censorship (formal or implicit) in genre fiction?

Censorship is fatal . . . and stupid. SF always passed the censorship filter because the censors considered it minor literature, like comic books or fantasy or humor (so long as it wasn’t political humor).

Do you think of yourself as an SF writer? A writer, period? Has that changed over time? Is the distinction important?

No. I am not a writer of science fiction. I am a writer and that is how I want to be thought of. I wrote SF for a time, three or four books. And that was all.

Is there a stigma attached to SF? An extension of the censors’ view of SF as minor literature and so beneath concern? If, as you say, there are very few writers of SF in Argentina, is the genre marker in some way simply unhelpful to readers, inaccurate?

Of course! The high priests of the academy or the fashionable writers always thought SF was insignificant, something like detective novels or comic books. They imagined SF books as sagas starring the little green men with antennae who were coming to invade the Earth. By the time they discovered Philip Dick, Ursula Le Guin, Lafferty—the greats—it was already too late.

Tell us something about publishing in Argentina. Has there been a consolidation of publishers similar to what we’ve seen in the U.S.?

In Argentina, we are always in crisis. It is hard to publish. There was a time when publishers could take a risk and publish something by someone unknown. That’s how I found generous publishers who thought, “Well, very good, she is not, but one day, probably, she will write something good.” And they published my first books. I want to include their names here: Daniel Divinsky, Paco Porrúa, Jorge Sánchez. My thanks to them, always thanks.

How did you come to publish your first books? How were you and your work able to find those receptive, risk-taking publishers?

I won—I no longer remember the year, but it was in the early ’60s—a prize from the magazine Vea y Lea for a detective story. And shortly afterward, the Club del Orden Prize for a book of stories, which included the publication of the book, which was Cuentos con soldados [Stories with Soldiers]. I had not yet discovered SF but I was on the edge of it and while most of the stories in that book are “realistic,” the fantastic is already starting to appear in them. Once I was involved in that, in SF, I wrote to Paco Porrúa, who at that time was publishing Minotauro, a magazine of SF stories. I asked him why he published only North Americans and I sent him one of my stories, one that was SF. He replied, explaining that Minotauro was a faithful translation of a North American SF magazine whose title I have forgotten and he asked me if the story I had sent him was part of a book. I told him yes, but that was a lie, there was no such book. He asked me to send it to him and I set to writing it and finished in record time: It was my second book, Opus Dos. And we became great friends. Afterwards he published my Las Pelucas [The Wigs] and Daniel Divinsky took an interest in me and as we had friends in common, in conversation he offered to publish my next book, which was Bajo las jubeas en flor [Under the jubeas in bloom], decidedly SF.

Trafalgar Medrano is an inter-galactic traveler, yet absolutely down to earth, a pillar of Rosario society. Where did the character come from—any specific inspiration?

He didn’t come from anywhere. One day he appeared, he came in through that door and he spoke to me. As Borges, the Master, said: “When I heard Funes speak, then I had the story.” One has to let the character speak.

That combination of space travel on the one hand and daily life in Argentina on the other—is that typical of Argentine science fiction? Does it reflect a special genre of SF?

No, not at all. There is no SF in Argentina. There were two or three writers and nothing too special that might be studied from that point of view.

One of the things that interests me in your work, in particular in Trafalgar, is the emphasis on storytelling—on the way stories are put together, traded among friends, doled out like treats or presents. Could you tell us something about how you see the function of stories?

People are the same everywhere, in Buenos Aires, in Ulan Bator, in Paris, in Roldán, in Toronto, etc. People always want the same things, to have food, a house, warmth in the winter, cool in the summer, to go to the movies on Saturdays, to go on vacation . . . and to be told stories. To listen to stories is a basic necessity. And everything is a big story: journalism, television, radio, religion, film, everything. We are all readers, active or potential. “Tell me a story,” the reader says. “I am going to tell you a story,” says the author, “but you have to believe me.” “I will believe you,” says the reader. And thus, on the basis of this agreement, those of us who write set ourselves to tell a story. Which can be a novel, or theater, poetry, but that will always be a story. And so we fulfill one of people’s basic needs. As important as food and shelter.

Returning to the question of Trafalgar’s language, I have to ask a translation question. Trafalgar acts as an interpreter—translator—of the distant worlds he visits for his listeners at home. Have you written about other characters who have a similar intermediary or interpretive role?

No, never. Trafalgar is one-of-a-kind.

Has your experience translating other kinds of texts influenced your fiction writing?

Yes, of course. For thirty years, I translated medical texts. I worked in a medical center as a librarian and a translator from English, French, and Italian. But I don’t think that influenced me. Medicine doesn’t interest me. I have a son who’s a surgeon, and a grandson who’s a surgeon, and from time to time I get sick, and that is my entire relationship to the science of medicine.

I was thinking more of the act of translating, that particular sensitivity to or awareness of language. But maybe writing and translating are just different facets of the same activity, so that the attention to language isn’t so different?

Yes, of course, I am convinced of that: Writing and translating are part of the same miracle that is language—that which made us human.

I’m reading a lot of astrophysics (of which I understand about half but that’s enough for me) and narrative as always: the classics as always and a few new things that interest me. 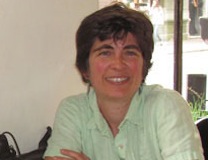