A Subtle Web: A Tale From the Somadeva Chronicles

Published in Apr. 2020 (Issue 119) | 1231 words
© 2018 by Vandana Singh. Originally published in Particulates, edited by Nalo Hopkinson. Reprinted by permission of the author.

The Blue People of the desert continent on the Planet Miln have never been in space, as far as their ancestral memories go. Among the sand dunes and the whirling dust devils of the Southern Continent, they lead nomadic lives, content to traverse, generation after generation, the shifting pathways across the great desert. In all their remembered history, only one of them has ever traveled to the Northern Continent and beyond, never to return. The Blue People do not speak to the Northerners, and indeed their language is unique on the planet, unrelated to the other language groups. Their name for themselves has nothing to do with the color of their skin, but refers instead to the nature of their inner essence.

Among their stories, the strangest is this one: The Blue believe that each of them is one-half of a whole. They believe that each person has a twin on the other side of the galaxy, and the twin is identical in every way to them, except that they are made of a red essence instead of the blue. The Red People live on a planet similar to this one. When a Blue person dies or is born, so must their Red twin. At any moment, a Blue person knows what their Red twin is thinking, and the Blue’s thoughts are also apparent to the Red. Thus, neither is ever alone—they think their own thoughts, but always in the companionable presence of the other. The Blue Elders explain that this is a concession from the universe, which is constrained to always keep Blue and Red twins apart.

There is a story about a Blue person, Milula, who was the only one of his kind to go into space. Listen, then.

One day Milula stopped feeling the presence of the twin in his mind. He thought that his time had come, and called to the Elders, who laid him on the deathbed. He breathed slowly, opening his mind to the cosmos, waiting to die. But moments passed, and days passed, and he did not die. He got up from the deathbed and paced about in great agitation, and told his Elders that something was very wrong in the balance of the universe.

The Elders were troubled too, because there began an epidemic of similar troubles among their people—the connections with their Red brethren would come and go, or become very faint. Milula was among the very few for whom the link appeared permanently broken. It was known that sometimes certain diseases could break the link between a person and their twin. So the Elders tried to calm Milula, gave him healing herbs, and bade him wait until the link was restored.

But Milula was not content with waiting, and the desire came upon him to do something for his people’s suffering and his own—so under cover of night he left the community and made his way across the dunes to the Northern Continent. This took many moons, and he had many adventures along the way, and learned much that astonished him. Finally, he got to the great spaceport on the Northern Continent.

Here the people laughed at Milula and told him that the stories of his people were nonsense. Nothing, not even thought, could travel as fast as light. How could the Blue People know, in an instant, the thoughts of their Red twins, even if the Red twins actually existed? The other side of the galaxy—what kind of address was that?

Milula was angry at first, but he calmed himself, and worked and waited, until a ship consented to take him into space.

We do not here tell the story of his journey, except to say that it was long. The ship was an exploration vessel, going beyond the farthest known corner of the galaxy. It jumped distances the way a flier sweeps over rugged terrain, leaving far behind those who must traverse the land on foot. But even so, it took half a lifetime to reach its destination. In that period, everyone Milula had known on his planet had died, and the next generation had grown up and lived and died as well. The God of Time, as he learned on the ship, was married to the Goddess Velocity, whose best-known incarnation is Light itself. “Then my twin is also dead,” he thought, and was filled with great despair that his journey had been for nothing.

But after some time, a strange thing happened: Milula began to sense again the presence of his Red twin. Their mutual joy and surprise can hardly be described in words. The explanation was simple: The Red twin had been overcome by the same impulse to find his partner. So he, too, had left his world to seek his other half. During the time that the two had not been in contact, the Red twin had worked out what had caused the problem. In their dance around the center of the galaxy, the two planets, Red and Blue, had moved into positions where the line between them was intercepted by clusters of giant stars. The inner portion of the galaxy is indeed thick with such stars, as well as the devouring mouths of black holes. So the thread of communication between the Blue Planet and the Red Planet was distorted in such a way that the messages between them could fall into empty space instead of a receiving mind. Each link had its own rhythm, the Red Twin said, and some rhythms were more susceptible to the distortion than others. He declared that they must now be close enough together that the lensing effect of the massive star clusters was no longer flinging their communications into the void.

When Milula and his Red twin, Alulim, were close enough, they left their respective ships in small shuttles, and sped toward each other. The shuttles docked, and the two finally stood before each other. As they embraced, there was a great burst of light that enveloped their shuttles in balls of fire. All that was left of them was a green star that still glows dimly in the night sky.

In the season when the green star is visible at its zenith, there are also meteor showers that leave tracks of light across the black void. To the Blue People, these are the messages between the two planets made manifest. The Northerners scoff at the ignorance of the Blue People, but they cannot explain why the Blue sometimes die without rational explanation. For example, a healthy young Blue sitting at a campfire might topple over with a scream of pain, declaring that a Red has fallen off a cliff on a world 80,000 light-years away, and then proceed to die of the same injuries. There is nothing in their physiology to explain this, except for a mysterious organ in the brain that the Northerners cannot explain.

I think [Somadeva said] that the Blue People perceive the universe entirely differently from us. Perhaps they possess an alien sense that reveals pathways, connections that jump the vast voids across time and space. It is in this subtle web that the thought-messages of the Red and Blue People lie entangled, allowing them to be together always, even as they must always be apart. 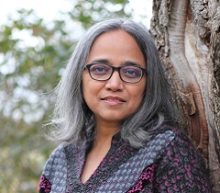 Vandana Singh was born and raised in India, and currently lives in the Boston area, where she professes physics and writes. Her stories have earned her a Carl Brandon Parallax award, a Tiptree and ALA Honor, several other award nominations and multiple reprints in Years’ Best volumes. She has published two critically acclaimed short story collections, The Woman Who Thought She Was a Planet and Other Stories and Ambiguity Machines and Other Stories, which was shortlisted for the Philip K. Dick award.  Her website is at vandana-writes.com.