Published in Oct. 2017 (Issue 89) | 1960 words
© 2017 by Rachel Swirsky. Originally published in Patreon.com/rachelswirsky. Reprinted by permission of the author.

The stranger emerged from the shadows by the backstage door, proffered lighter held in long pale fingers. Winged eyeliner emphasized the charcoal of his heavy-lidded eyes. He wore the absence of a smile like expensive jewelry.

Morgan leaned in for the light. “Hello,” she said huskily. She liked the look of him. She was stuck working this show as a stagehand, staring at the actresses who could get real work, and she wasn’t even supposed to smoke during her well-earned breaks. She could use a distraction. Gesturing toward the theater with her cigarette, she asked, “Enjoying the show?”

“Oh, I don’t attend the theater,” the man said, slipping the lighter back into the pocket of his leather jacket.

Morgan pursed her lips and blew out a narrow stream of gray. “What, were you waiting for me?”

“For . . . someone.” He looked at her sidelong through a screen of dark lashes.

His voice was so flirtatious that she took it as banter, discarding the line without thinking too much about what it meant that he’d just admitted she could have been anyone. If she had, she might not have ground the half-smoked cigarette beneath her heel and followed him behind the hedges that lined the parking lot where they could kiss in the shadows because screw this job anyway. She might not have slid her hands along the shoulders of his leather jacket, closing her eyes and tilting her head upward to receive his kiss, exposing her neck as she did so.

“So that’s why I’m a vampire,” Morgan said, sitting at the bar, nursing her drink, looking up at the genial-though-weathered face of the bartender. “Stupid luck. Could have been anyone. He said so.”

She tipped her head back to take the rest of whiskey at once, but the glass was empty except for a sliver of ice-melt stuck to the bottom. She smacked the glass down again.

“Even then,” she continued, “even then, it could have been okay. They don’t turn most people. But he was bored, and he wanted someone younger than him to play with, so there you go. Wham, bam, thank you, ma’am. Stick your teeth into her neck and leave a girl a wreck. He doesn’t even pay attention to me anymore, you know? Says he wanted a natural blonde.”

“That’s a shame,” the bartender said, head shaking slowly back and forth as he fixed her with amber eyes brimming with sympathy.

Morgan took a second look at him. Ashy blond hair fell in a bed-headed rumple across his forehead. A slightly feral, woody cologne rose from him, strong even across the bar. Stubble shadowed the square line of his jaw, intriguing and masculine.

“Ever slept with a vampire before?” she asked, leaning over the bar to show the cleavage beneath her leather corset.

The bartender’s lip slid upward in a teasing smile. “Not with a vampire, no.”

Drunk on self-pity and single malt, Morgan shrugged off his odd emphasis.

She draped herself over him as he gave last call and closed up. She groped him while he grabbed his bomber jacket, and nibbled his ear as they made their way to his truck.

Soon he was behind her, eager to taste and claw her skin, fingernails gouging delicious scratches into her back. Above, the night was swaddled, clouds blacking the moon and stars. His deep, guttural noises were thrilling and wild.

Wind took the sky and banished the clouds, exposing the plump whiteness of the full moon. Behind her, Morgan heard the furor of breaking bones and sprouting fur as the shape pressed against her back transformed and began to howl.

“Yes,” Morgan said with irritation. “You can be both a vampire and a werewolf.”

The bespectacled professor leaned forward, stylus tapping his tablet. His office was small and cramped, books looming down at her in bulky red leather covers with gold-lettered spines.

“This is just fascinating,” he said. “Fascinating! Do you understand how many theories this overturns? Do you realize the implications for theology? How can a creature be both soullessly dead and wildly animal at the same time?”

Morgan shrugged. “When I’m a wolf, I drink deer blood. When I’m human-shaped, I avoid silver jewelry.” She held up her hand and spun the gold bangle on her wrist. “It’s not that complicated.”

“What about sunlight?” he asked.

“I might be able to deal with the sun as a wolf, but I’ve never wanted to take the risk. Honestly, it doesn’t seem worth it. The important things about being a werewolf all happen at night anyway.”

“Fascinating,” the professor repeated, “Just fascinating. I’m not sure I’ve ever seen a more fascinating specimen before.”

Morgan shifted in the small, bare wooden chair that sat in the shadow of the professor’s desk. She was more uncomfortable with his tone than the seat; when he complimented her, he seemed possessive, voracious.

The professor leaned back in his winged armchair, waving his hands defensively in the air. “Of course not! Of course not. Badly chosen word on my part. But you are—fascinating.”

He leaned forward again, and she saw behind his glasses that the whites of his eyes were veined with red. As he ran his worm-like tongue avariciously across his teeth, they moved loosely in his jaw, releasing a scent of decay.

“Fascinating,” he said again. “When I think of what’s locked inside that head . . .”

His tongue flapped out of his mouth to lick his lips. It was a purple slab of meat, riddled with maggots. She’d thought he was merely skinny, but she noticed now the way his skin was tight and shrunken.

Morgan sagged in her chair. “Crap.”

She managed to avoid the merman who was posing as a surfer while he searched for an underwater bride. She fell for the demon’s infomercial sales pitch for “cosmetics,” but went out on a blind date with an angel later which ended up canceling it out.

When the elder care industry started transplanting brains into robots, she jumped at the chance to join aging millionaires upgrading to cyborgs. She was tired of being subject to the cacophony of supernatural demands. At least her strain of zombification left her mental faculties intact. Vampirism canceled out zombie decay, too, but still. At this point she was reduced to sucking blood out of brains.

Unfortunately, it turned out that her supernatural limitations weren’t tied to her body after all. Having a cyborg’s perfect facility with calculations did help her catch prey in her wolf-shape, though, which was good since any squirrels or rabbits that escaped her zombified jaws became monstrously afflicted themselves, which was probably going to collapse the whole ecosystem at some point.

When a passing comet weakened the veil between worlds, releasing floods of spirits, Morgan was one of dozens who passed into the afterlife without leaving the Earth. It was the best thing to happen to her in decades.

Being a specter in the shape of a robot had its virtues. Translucence restored her immunity to the sun, and she no longer needed to consume blood, squirrels, brains, or electricity. Ghosts were scarce, so it was easy to float to an isolated farmhouse and settle in to spooking the chickens. She was tired of interacting with other creatures, alive or undead.

Eventually, the residents got scared and moved out, taking the chickens with them. The house’s reputation prevented anyone else from moving in. Morgan enjoyed her solitude beneath the slumped roof, wandering the weather-battered floorboards between decaying walls.

She was displeased when a man arrived with cameras and monitors.

He was a bland-looking young gentleman carrying books and jury-rigged machinery labeled university property. He was probably a grad student, she realized. She wouldn’t have thought a man that age was young back on the night when she was turned into a vampire. It had been a long time.

He spent hours setting up screens and speakers and microphones, all wound together with odd wires. At certain nodes, he placed strange things: semi-precious stones, beakers of bubbling fluid, carved ivory charms, carefully drawn geometric patterns. She watched his plump brown hands working under the scrutiny of his narrowed eyes, the brow above furrowed with concentration.

She was so intent on watching him, in fact, that it wasn’t until he set up a recording device that she realized what he was up to.

She zoomed for the door, but before she could get far, the air around her became a furious wind, pushing her back to the floor.

The grad student looked up at the disturbance. “Uh, hello,” he said, scanning the room as he spoke, clearly unsure where Morgan was. “Sorry about this. I’ll let you go in a minute. I know you’re a recluse, but we thought we should tell you before we left. Uh.” He scratched his neck, looking embarrassed. “Could you make a sound? So I know where you are? This is awkward.”

“Fine, uh, you don’t have to,” he said. “So, um, we’re all leaving the Earth. Everyone, all the people. We’re building a ship and we’re going to go out into space.”

Morgan gave an acerbic snort. “Why?”

The grad student blinked rapidly. “You talked!” he said, turning his head in the direction of her voice. His gaze missed, falling over her shoulder.

The grad student’s fingers rose to fret with his collar. “Uh. Things are sort of . . . not good.”

“Yeah, that,” he said, clearing his throat to buy a few seconds. “And, uh, the garbage continent. And the, uh, asphalt virus. And the zombie rabbits . . .”

“I will. I will! In just a second. See, well, since everyone is going, it’s going to be pretty lonely here, and what with the asphalt virus, there won’t even be much to, uh, look at. So, we’ve got this list of verified hauntings. And we’re offering, if you want to come on the ship, you can.”

“I say a ship, but it’s actually more like a space-born computer.” He gave an awkward smile. “Have you heard of this thing called uploading?”

Millions of years later, an urgent summons surged through the welter. Morgan rose through layers of collective virtual consciousness to participate in the steering council. Their vessel was rapidly disintegrating, and their only source of succor was the alien hive ship nearby.

The hive queen’s order flashed into all their consciousnesses simultaneously. She extended her antennae in friendship and sympathy as she explained that the humans would be welcome to join them. They prided themselves, she said, on peaceful integration and assimilation.

“I knew it,” she gasped unintelligibly between breaths. “I knew it!”

Avatars, fragments, and instantiations regarded her with confusion. After millions of years evolving in the welter, many of them probably didn’t even know what humor was anymore.

Morgan laughed even harder. She wondered how the universe would look through bug eyes. 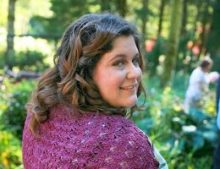 Rachel Swirsky graduated from the Clarion West Writers Workshop in 2005, and holds an MFA in fiction from the Iowa Writers Workshop. Her short stories have been nominated for the Hugo Award, the World Fantasy Award, and the Locus Award among others. She’s also twice won the Nebula Award, once for her novella “The Lady Who Plucked Red Flowers beneath the Queen’s Window,” and again for her short story “If You Were a Dinosaur, My Love.” Her first collection, Through the Drowsy Dark, is available from Aqueduct Press; her second, How the World Became Quiet, came out from Subterranean Press in 2010. Visit her website, chat with her on Twitter, or support her on Patreon where she posts one new piece of fiction or poetry each month.