Before the Haze Devours You

If time can stop, this is how it feels.

Yunuen was born to be trapped in this moment. She has been looking at the same alert in her helmet’s heads-up display for a perpetual instant that has become her whole existence. One billion kilometers away from home, she lies in the purgatory that is the red glow of this warning message. In front of her eyes, these petrified uppercase letters have lost all their meaning. Time does not exist anymore.

Surrounded by Titan’s thick, orange haze, Yunuen feels a deadly chill slowly making its way through the insulating layers of her suit. But she feels something else, something warm. Blood soaks her inner garments. A clot starts to form somewhere in her lower back and tickles exactly where it aches the most. Everything is pain and cold.

Everything is sound too. The blare of her suit’s alarm blasts in her ears. Yunuen can barely hear her thoughts inside this fishbowl overflowing with ominous noises and waves of pain.

She tastes blood and bile. The ghostly smell of methane lurks in her nose, but that cannot be. That should not be. She should not be here alone either. Not now that it has started snowing, and fragile methane crystals gradually pile up on her body.

“What do you want to prove, Yunuen? Here, you don’t have to pretend you’re strong. In this gig, we’re all vulnerable. We’re teammates. We do the job, we go home. Together. It’s that easy. There’s no need for you to overcomplicate things,” the commander has said so many times. But Yunuen is stubborn and has already overcomplicated everything by being here alone, bleeding, with a tear in her suit, and unable to communicate with her ship.

>Ramirez-Navarro extraction ship, I have a problem here. I made an unauthorized landing.

Yunuen crashed near the methane-extraction tank she was looking for before her accident. She can see the faint green glow of LEDs blinking through the haze like a sleepy source of Morse code signaling life. Yunuen thinks that her whole apartment could easily fit inside that huge metallic container, maybe even a three-bedroom townhouse. She could move there with Ixchel to start a new life away from everything, just the two of them watching dunes disappear like ghosts among the haze, catching a glimpse of Saturn on an impossible clear day. Although the tank is not supposed to remain on Titan, it is set to be Ramirez-Navarro’s most important cargo: one of the first delivering methane for Mars’ terraforming process.

She knows she ruined everything when she decided to abuse her security privileges in order to take the ship’s glider out by herself. But she had a reason. Who would have liked to wait for months so another viable gravity assist window would open? Who would have liked to stay orbiting this orange-haze sphere instead of going back to Ixchel’s soft arms? This job had to be done now, no matter Titan’s weather conditions. Fuck the weather. What could go wrong? Just get the job done and go back home as quickly as possible. Besides, installing an updated radio beacon into the methane container’s control panel should not have to be a more-than-one-person job. Yunuen could do it with her arms tied to her back.

The vast expanse of Ligeia Mare stretches out into the horizon. Yunuen should be glad she crashed on these jagged rocks instead of the liquid methane where she would have frozen before drowning. She instead curses because she cannot make sense of what happened. If only she could access the suit’s telemetry records to see why it failed mid-glide, or why the haze dragged her down, but there is no information she can read because all alerts override the suit’s functions unrelated to survival. That data would be useless, though, since she cannot share it with anyone. Yunuen has tried to reach her ship for minutes that seem endless, but the Ramirez-Navarro comm links appear to be offline. Her high-pitched voice breaks out of the pain and mixes with all those alerts, but it doesn’t go anywhere.

Yunuen needs to send a signal to her ship, a flare-like sign marking her location. She knows her crewmates should be looking for her by now because they are not as selfish as she is, because they don’t want to prove anything to anyone. Someone on board Ramirez-Navarro must have already noticed that she is not there, that the glider was taken out by force, that the airlock was offline for a moment. Yunuen needs to get to the tank to finish her original mission. She struggles to get up, but her legs don’t obey her. The pain in her back is like the haze: looming, expanding, eternal. Besides, it has been snowing steadily. This light snow is unstoppable, like her pain. How long will it take the Ramirez-Navarro crew to find her? How long does she have before her suit can no longer keep her alive?

She needs to do something. Now.

>Ramirez-Navarro, this is Y. Do you copy? I made a hard landing, but I have eyes on Methane Extraction Module 001.

>Ramirez-Navarro, someone. Do you read?

“Neither you, nor I,” said Ixchel. Her eyes were swollen from crying. “It’s not fair that you get to leave and I have to stay. So meet me halfway, in Mars. But do it sooner rather than later, before the haze devours you, before I forget how warm your body feels beside mine.”

When Yunuen was selected for the Ramirez-Navarro extraction mission, she had to leave her other plans aside: the three-bedroom townhouse in the middle of nowhere, Earth, Ixchel. She didn’t even say goodbye before quarantining at Yucatan Space Center previous to launch. She didn’t want anyone—much less Ixchel—to know she was terrified of being alone so far from home. She is here, nevertheless, surrounded by haze, losing everything she thought she had and never cared about, her fears piling up on her like methane snow.

She tries to crawl while dragging the radio beacon in one hand. The golden circuit board leaves a short trail in the snow. Yunuen is barely moving, a couple of centimeters at best. The pain is overwhelming and the tear in her suit is getting bigger with the slightest shift in position.

She smells methane, perhaps formaldehyde. Her Primary Life Support System is starting to react to Titan’s snow that is slowly getting into it. Yunuen has an idea. She needs a spark.

Yunuen knows that an explosion can generate enough radio waves to be detected by the Ramirez-Navarro’s continuous search system. That way, the ship could easily locate the methane extraction module. Get the job done. She needs a spark as well as her remaining oxygen which would be useless if she would let it escape. Outside of her suit, that oxygen would boil, but inside, it flows in a human-shape balloon, whose fate is to pop. And go back home . . .

The whole Solar System listens to her shriek when she conjures all her will to detach the battery of her PLSS from the inside, then put it near the oxygen supply. She’s sweating, but still manages to make a lump of snow to seal the tear on her suit. Froth comes out from her mouth. She gathers all the strength she has left to grab a piece of rock and smash the battery. Over and over again. Each blow feels like Ixchel’s pounding heart. Every strike resembles Ramirez-Navarro’s boosters igniting. By means of a rock, Yunuen commands the universe. Her hands are meteors.

Yunuen doesn’t have time to stop feeling Titan’s cold, to entrust herself to the pain that won’t be much longer. Minutes ago, time ceased to exist.

She thinks about Mars and the Ramirez-Navarro crew, and about Ixchel crying back home, more than one billion kilometers away from her. She knows her own tears won’t even last as drops in Ligeia Mare. She thinks about the three-bedroom townhouse, and that she would have wanted to get the job done and go back home before being devoured by Titan’s haze.

She thinks that she doesn’t want to be alone, and she thinks about the pain, and the blood, and the noise of her suit’s alerts, and the blast that is even louder.

This is how it feels when time moves on. 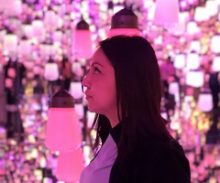 Nelly Geraldine García-Rosas is a Mexican immigrant and a graduate of the Clarion West class of 2019. Her short fiction has appeared or is forthcoming in Clarkesworld, Nightmare, the World Fantasy Award-winning anthology She Walks in Shadows, and elsewhere. She can be found online at nellygeraldine.com and on Twitter as @kitsune_ng.