The cab slices through the city, one small fish of a humming black shoal, while Henrik watches ads in his rain-flecked window. Today he sees carnal red sociomachines, spine-mounted, that spray pheromones and calculate human interaction. A black-and-yellow swamp whirling through space. A man screaming no at the moment of orgasm.

The product is not always clear, but the ads are always effective. He can feel money slivering off his account and slithering into the ether. The cab’s vestigial partition, now a slab of flickering smartglass, shows him that he has invested in a dozen new corporate splinters. His dollwife will be so pleased. For a moment, imagining Masha’s smile unhooks the tightness in his chest.

The tightness redoubles. Henrik hunches forward, peering at the smartglass. The map shows no obstruction. “For what purpose, cab?” he demands. “I can’t be late to work.”

Henrik looks at the map again, the digital labyrinth. His black ride-tracking icon has been joined by another. They snake toward each other through the pale city.

The cab carves left. Henrik is paralyzed in the backseat, his heart hammering, a strange foaming static in his ears and also encroaching on the edges of his sight. He has never been selected for a deathmatch before. He has considered the possibility, of course. All men do, in the days of their youth and vigor, observing their lean muscle in the mirror and fantasizing violence against anonymous offenders.

But as his hormonal irritability diminished, as his body slowly softened with age, the prospect became ridiculous to him. He asks, for a second time, if there might be an error afoot.

“Are you Henrik Schorr?” the cab whispers.

“Were you born on a Monday?”

“Are you frightened of cats and needles?”

“Please place your hand on the smartglass.”

Henrik sloughs the sweat from his palm onto his pantleg, then places his hand on the smartglass. Laser plays up and down, reading his cracks and whorls, unhurried. The cab requests his eyeball next, scanning his retina. Lastly, it swabs the interior of his mouth and taxonifies his bacterial flora. He dares to hope.

“No error,” the cab whispers. “Would you like help preparing your profile?”

Mercury sloshes through his stomach and extinguishes the hope. He begins to picture it in earnest now: the grimy alley or public washroom, any halfway point deemed private enough by the algorithm, where he will fight for his life.

“I don’t want to go to the deathmatch,” Henrik says. He can feel a whine rising in the back of his throat. “I want to go to work.”

“You agreed to the terms and conditions of the CityCab neuro-app,” the cab whispers, “wherein it is clearly stated that all riders are entered automatically into the deathmatch candidate pool. Would you like help preparing your profile?”

The smartglass displays him in miniature, shirtless: his growing gut, his sagging breasts, the wiry hair that sprouts around his nipples. It lists his height, 1.7 meters, and his weight, 74 kilos.

“How would you describe your fighting style?” the cab whispers.

Henrik yanks periodically at the door handle, but of course the cab is locked. He has learned new things about his body. His left hand can tremor in perfect counterpoint to his twitching right eye. The city seems to be moving past at a blur. Even worse is the smartglass map where two beetle-black icons race, inexorably, toward their appointment.

In the upper left corner, the cab has completed his profile without his involvement. His fighting style is listed as Cowardly Gecko / Desperate Orangutan.

“You have to find someone else,” he says hoarsely. “My job needs me.”

“It’s been verified that they do not,” the cab whispers.

“Masha is an artificial organism that can be easily repurposed in the event of your death,” the cab whispers. “It will not miss you.”

“Its cognitive capacity is in line with that of a small dog,” the cab whispers. “You would know this, but you spend most of your time fucking it, or gazing rapturously at its immaculate bone structure.”

“They will continue to receive your yearly facecall, if they wish,” the cab whispers. “The algorithm may even be able to strengthen your conversational skills.”

Henrik shakes his head fiercely. “I’m not getting out of the car,” he says. “I’ll just sit here.”

“That would be a selfish course of action.”

“Imagine the waste,” the cab whispers. “Time and fuel and emotional labor, all up in smoke. It would be deeply disrespectful to your opponent and to the algorithm that paired you.”

Another jag of fear, this one sharper, as Henrik envisions his opponent for the first time: a young man swollen with muscle, baying for blood in the back of that other cab, or maybe a whittled-down woman, murderously zen, performing breathing exercises in silence.

“Why don’t you pick two people who want to do it?” Henrik feels his voice winching tighter, higher, but he can’t stop it. “Why not have people opt in? Voluntarily? It would make for much better deathmatches.”

“This is not entertainment,” the cab whispers. “That would be barbaric. Nobody will witness the deathmatch except for a state-appointed drone.”

“Then why’s it happen at all?” Henrik wails. “What’s the flipping point?”

Henrik grinds his forehead against the window, breathing hard. “I don’t want to—to kill someone,” he says, to avoid saying die.

“You’ll be fine,” the cab whispers. “You’re a killer already!”

“I’m not, though.” Henrik scratches madly at his neck. “I’m not. I can’t even stomp on cockroaches. Masha has to do it.”

The smartglass flickers. He sees a montage of children choking in lithium mines, families gunned down in infrared by border patrols, carbon expenditures rendered as rising dorsal fins. All the small tragedies too obvious to dwell on.

His stomach tumbles down a hill.

“We’re all killers, here,” the cab whispers. “And things run very smoothly for us. Would you like to see your opponent’s profile in advance of the deathmatch?”

“Your home is forfeit,” the cab whispers. “As is Masha. As is your job. As are your investments. They all hinge on this arrangement. They always have.”

Henrik pictures himself as a noctivagant vagrant, stalked through the streets by nanocarbon jellyfish, herded into the public pillory. Gaunt and naked. Filthy and wild-eyed.

“Would you like to see your opponent’s profile in advance of the deathmatch?” the cab whispers.

The other icon rounds a corner, placing both of them on the same street for the very first time. The collision creeps closer. Henrik swallows. He nods.

The cab needles into a charging stall on the empty parking lot of a neon-swathed restaurant. Henrik has looked his opponent over, and over, and feels a strange intimacy with him. His name is Ibis Koskinen. He stands 1.6 meters. He weighs seventy-seven kilos. His fighting style is Existential Dread / Bowling Ball. His face is lined and kind.

Henrik already knows, with dreamy certainty, what will happen next. He and Ibis will exit from their respective cabs and walk toward each other, every step loaded with ill intent, violence rising in their eyes and wafting off their skin like steam.

But the closer they get, the slower they will walk. Their shared humanity will be as two magnets pushed against each other, throbbing outward, repulsing. They will each see themself in the other. Then the poles reverse, and they rush together, sobbing, laughing, joined by relief and disbelief.

“It’s time to get out of the me,” the cab whispers.

That is no issue, no issue at all. Henrik will open the door now, swing out onto the rain-slick pavement, stride easily toward his unmet sibling, his fellow sapien. As soon as his hand works.

“I’m rooting for you,” the cab whispers. “I was also born on a Monday.”

Henrik’s head feels like it will spill off his shoulders. His lungs are buzzing. His armpits are gouting sweat. The door opens for him, and he stumbles out into the cloudy gray morning. A few seagulls are picking through a parabola of grease-spotted trash. One gives a fluttering shrug at his approach, cocks its head to the side.

Ibis is waiting by the dumpster. He is wearing the same tie as Henrik, a sleek cobalt noose. He is slowly rolling up his sleeves. That everyday action is suddenly turned strange, unnatural, like a penis seen in sunlight.

“Deathmatch,” he says, in a trembling voice. “Who would go and invent something like this, eh?”

Three seagulls and one state-appointed drone see the ending. It is clumsy, ugly, exhausting. Grunts and yelps. Pleading. Blood smears across soft hands and faces. Tool use becomes inevitable. Shards of broken bottle gleam from the asphalt. A cinderblock is lighter than anticipated. A skull implodes slowly, over the course of many blows.

The winner limps inside the restaurant. They go to the bathroom to rinse blood and mucus from their hair. They come out to order hashbrowns and lab-meat sausage and orange juice. When they finish eating, they vomit.

Then they adjust their cobalt tie, wipe their red mouth, and request a cab. 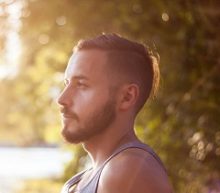 Rich Larson was born in Galmi, Niger, has lived in Spain and Czech Republic, and currently writes from Montreal, Canada. He is the author of the novels Ymir and Annex, as well as the collection Tomorrow Factory. His fiction has appeared in over a dozen languages, including Polish, Italian, Romanian, and Japanese, and his translated collection La Fabrique des lendemains won the Grand Prix de L’Imaginaire. His short story “Ice” was recently adapted into an Emmy-winning episode of LOVE DEATH + ROBOTS. Find free fiction and support his work at patreon.com/richlarson