He ran his hand along her cheek in a swift caress, brushing the line of her jaw as he tucked the one stray lock behind her left ear as he often did, and said, “How did we find each other?”

“Oh, you,” she said, with that look, as if the question were another of their habitual endearments. “You’re sweet.”

He traced her other cheek, looked deep into her right eye, then her left, having memorized the stained glass kaleidoscope pattern of her irises so clearly from this practice that he could see them easily when he closed his own eyes.

She laughed without a sound, just an exhalation, and mirrored the movement his hands were making, cupping his face in her own palms.

She kissed him, and he thought, Well, that’s one difference between her and the cats.

He asked his friends, when he thought of it, in the very infrequent moments when she was not with him. “How did we meet?” he asked. And they laughed because it was such an odd question that they knew he was setting them up for some kind of joke. And when he said, “No, I’m serious,” they grew serious too, and took on a puzzled, questioning tone. “Uh . . . you’re asking us? You guys have been together longer than we’ve been friends.”

He went through his photographs, the digital images first, looking farther and farther back through the files, and she was in them all, and he could remember now how she had been there at the time. Beyond a certain point there were no more photos, but that was because of a huge lightning storm, when they’d gone a week without power and his computer had been fried, with everything on it lost. So of course there were no digital photographs from the years before that. He found a box in the closet full of older prints and negatives, in envelopes date-stamped by the pharmacies and photobooths where he had dropped them off to be developed. And it was something of a relief to see that she was not in any of these. He could clearly recall how alone he had been then, but he still could not remember how she’d come into his life. One thing was becoming clear though: It was getting harder to remember life without her. Soon he feared that he would not be able to remember a time when she had not been with him.

He dug out a photograph of himself alone and put it in his pocket to keep with him as a reminder. It was a self-portrait he had taken, just a solitary photo of himself alone in the kitchen looking out the window as if at the emptiness of his life, which had been very empty then. This image had always seemed to him to capture the essence of his loneliness, and looking at it now made him wistful and sad, even nostalgic. He kept taking it out and looking at it, trying to remember how it had ended. Her arrival must have come about sometime in the age of deleted images when everything was uncertain. But when he asked his friends about it, to try and zero in on a date, he couldn’t convince them that he wasn’t teasing them somehow. And when he started asking her, she began to take offense.

“Why are you always asking me this?” she asked. “What’s your problem? It’s like you’re obsessed. Do you want me out of your life or something? Do you want things back the way they were before we met? Is that it?”

These conversations changed things between them. Or things were changing anyway, and the conversations were a symptom. There was no telling. But he felt he had started something and there was no going back. Just by noticing it, he had started it unraveling. It was as if, once she knew he had noticed the oddness, she started covering up the truth—as if she was afraid he might discover her secret. As long as he accepted the situation and went about his life without questioning it, everything was just fine. But he could no longer pretend to remember. It was driving him crazy. He was convinced she had done something, manipulated reality somehow, folded it around and inserted herself there in his life. Who was she, anyway? What was she? What sort of being had this ability to unravel and reweave the material of existence, working her way into it as if she had always been there?

“Stop looking at me like that,” she said. “I don’t appreciate it.”

It occurred to him that what they were heading toward was the unmaking of what she had made in the first place. Past a certain point, it was inevitable. She would remove herself from his life. She would vanish as if she had never existed. First from the daily routine—she’d be gone from their home, gone from their bed, gone from the parties they had with their friends. Then she would absent herself from the photographs—first from whatever new ones he took, obviously, but then from the older ones as well. If he ever thought to go back through his files, he’d see nothing but photos of himself. When he asked his friends about her, they would look glum to see him filling the emptiness of his life with imaginary partners, and they’d say, “Who?”

This was the way things were heading, and all because he had noticed. He wasn’t supposed to, he decided. He was supposed to have been oblivious, and just accept it. She must have done this before, but he was the first to have seen through it. Otherwise she would have done something different to make sure he remained unaware. She would have learned from prior mistakes, which meant he must be the first mistake. He was probably the only one who would see through her, because after this she would know what to do to remain undiscovered. In this way he felt privileged, special. He should feel fortunate that she had come to him, because it had allowed him to learn a very important truth about himself. From now on, even in his solitude, even when the memory of her had removed itself, he would own this bit of self-knowledge. He wouldn’t know how he had come by it, but he would cleave to it nonetheless. She had made him more whole, more truly himself. So there was a purpose to her being here after all.

Such were his thoughts on the last morning, as dawn crept into their bedroom, as the air grew bright and she grew dim, as the place where she was lying grew unlaid-in and the cats stretched out to fill it. But the thoughts were fleeting for he was already forgetting her, and he almost didn’t notice when, in the final moment, she woke and opened her eyes and turned and looked, but not at him, and said to no one but herself, “Why is this always happening to me?” 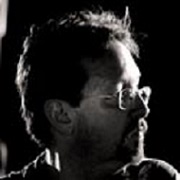 Marc Laidlaw is best known as one of the creators and lead writer on the Half-Life videogame series, but he initially got that gig on the strength of his short stories and novels of fantasy, horror and science fiction. His novel The 37th Mandala won the International Horror Guild Award for Best Novel. A writer at Valve since 1997 (currently working on for the online game, Dota 2), his short stories continue to appear in various magazines and online venues.