Of course I can be angry.

But I wear a headscarf. The moment I’m angry, you put me in your mental box labeled “TERRORIST” in neat, tidy small capitals. You store me under “Potential Danger” in the warehouse of your mind.

When I cross the parking lot to the grocery store, sometimes people hit the gas, not the brakes. And this is a university town, supposedly liberal—or is it?

I’m not a Muslim, but it’s not like most people around here can spot the difference. I allow you to guess my religion, my level of observance, my gender. You will probably guess wrong.

I won’t because it would not have gotten me out of secondary screening, immigration detention, hostile interrogation, and all the other abstract concepts that need at least two words to describe. I lived to learn.

But you know? Maybe I’m not angry because I’m not.

You expect me to be angry, or at least be silent but simmering with rage. And sure, I can work myself up to it. But right now I’m mostly just annoyed, sitting here under the helmet and asked to contemplate various emotions supposedly basic, supposedly universal across cultures. I have my doubts about this last part.

I hope next up is sadness, because thinking about anger makes me sad.

I wish my thoughts were tidier. A complete stranger will be examining these transcripts. I keep on going off on tangents.

I have a succulent on my living room table that keeps on trying to grow out of its pot and downward, forming a fringe of thick green bundles. But its branches are not strong enough to support their own weight, and they keep on breaking off, wasting away. The plant does not give up, and I water it dutifully, try to rotate it so that it occupies various positions with respect to the north-facing window, the evanescent sunlight.

It only wants to grow downward, toward certain harm.

This is not a metaphor, this is straight-up life. Plants have personalities—the balsam gourd in the office is feisty, rapidly growing tendrils toward all the other pots, seeking to reach out and tickle. Possibly smother.

Maybe you chose me for this task because I’m so observant.

Is this enough for sadness? Can I get a different one? Impatience is not a basic emotion, I am told.

Disgust is apparently a subcategory of anger, but I really don’t want to redo that segment. They should’ve briefed me first—this is not my field, I only know about Ekman’s six basic emotions from undergrad. Happiness, surprise, fear, anger, sadness, disgust. People refine their models all the time.

I threw out all my models, and again, and again. Extraterrestrial communication is also an abstract concept that needs two words to describe. It doesn’t sound much friendlier than hostile interrogation.

Fear and surprise fall under the same heading, emotions evoked by “fast-approaching danger.” I’m trying to scrape my brain for citations. Jack et al, I don’t remember the year.

I didn’t sleep through the initial briefing, I was just so anxious that nothing they said registered. Sure, I can tell you about the amygdala, fear response, interactions with short-term memory. It’s not really an excuse though. Does it matter? I feel like I’m in my comprehensive exams again, being interrogated by my committee, even though it’s just my thoughts being transcribed. Even though this is just the calibration phase.

I feel like I am looking at the immigration officer again.

Deep breath. I can upset myself with great alacrity and skill.

The research team think aliens will probably not understand the substance of my thoughts as much as the underlying emotions—at least at first. Everything needs to be precisely calibrated.

Am I too scatterbrained? I’m told that everyone has messy transcripts. Mine feel worse. I’m put on the spot. There are plenty of backup people standing by if my calibration fails, if the factors won’t converge, if, if. Plenty of people to take my spot.

Who wants the person in the headscarf? They made me take it off to put on the helmet, they made me take it off on the border, even for my driver’s license, my ridiculous student ID photo, my clip-on work ID stating my name and my surprisingly senior position. It’s not the right name either, but at least it doesn’t have a gender marker, and it’s not like people can spell my name anyway.

In the past two decades in this country, I have amassed a variety of ID photos with uncovered-head me. Maybe I should make an installation. Very artistic.

I’m supposed to produce fear and surprise on command, not anger. I don’t think my emotions segment into four neat categories. Boxes in the warehouse. I can try again—I do think I had the fear component. As for surprise, I would need to be surprised.

When I got this assignment, I was surprised.

It made me rethink that moment back over a decade ago, in undergrad, when in tears I confessed my diagnosis to my biostatistics professor, when he dragged me to Disability Services. If I’d stayed in my country of origin—I refuse to say home country, this is my home country now—if I’d stayed, I would never have experienced that moment. Disability Services wasn’t particularly a thing back there. I’m told now it’s different.

Surprise. Focus. When I’m nervous, I fidget, constantly readjusting my clothes, my scarf—and I’m clumsy so I sometimes pull it off my head altogether. I’ve never seen anyone else do that, but most of the other autistic people I know are staunch atheists. Secular people are horrified on my behalf, and I feel embarrassed, but I don’t think [uninterpretable] minds much—after all, [uninterpretable] is supposedly all-knowing and [uninterpretable].

I really want to talk to aliens, so I try to sit still. Just one more emotion to go.

I know why they saved happiness for last—it’s because of the priming effects. If I finish with happiness, I will remain a bit happier, for a little while. They didn’t tell me about this, but I do work with human participants in my own line of research.

I’m glad I transitioned from purely quantitative to mixed-methods. Extraterrestrial communication needs all the methods we can throw at it. Of course it’s my quantitative-minded colleagues who will read the transcripts. Stop with those thoughts, I don’t want to lose my job. Am I expected to think of sex? I generally don’t think of sex.

Happiness. Happiness is a vast spacecraft, reminiscent of alien-invasion movies, but accompanied by a feeling of elation and relief. Happiness is change.

I’m sure the people in the lab next door chose me for this assignment because they have these ridiculous stereotypes that being neuroatypical makes me better at understanding aliens. But you know, one tiny part of that is true: I want to talk to aliens, because I’m fed up with humans sometimes. When I was compared to space aliens as a kid, I probably internalized the wrong message—I decided that aliens must be really cool.

I used to be an alien—of a different kind; a resident alien, and before that, a non-resident. And inside me a warm feeling bubbles up as I’m told that the calibration has finished, concluded, I am ready, I have passed.

I know with the certainty of joy that I can help the newcomers with settling in. 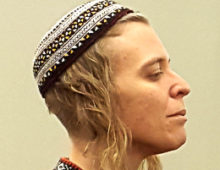 Bogi Takács is a neutrally gendered Hungarian Jewish person living in the US. Eir speculative fiction and poetry has been published in venues like Clarkesworld, Strange Horizons, Lightspeed, Apex, Uncanny, and more. E has a space opera webserial that has a trans couple as protagonists: Iwunen Interstellar Investigations, with free episodes each Monday. You can visit eir website or find em on Twitter.