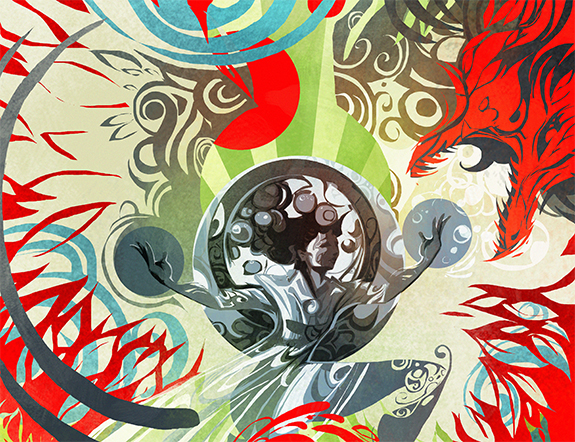 Ammuya birthed five hundred gods, followed by a monster. That was her first mistake. The gods tormented the monster because they feared it. They bound it inside a black hole, and the monster’s hatred seethed. Eventually the monster raged so fiercely he escaped the event horizon. Then he hunted down his siblings, one by one.

On a silent desert planet, Ammuya cried for her children. Her brave warrior-son: slain on a red giant’s surface. Her brilliant astronomer-daughter: struck down in her starry palace. Her gentle son of the solar winds: dead in her arms. She cried until the sun burned away her tears. Only she and the monster remained.

Then the monster turned on her.

Her child transformed to a tentacled dragon: darker than vacuum, hotter than supernova. She shifted into a massive millipede, whose segments sprayed toxic waste. The two wrestled, evenly matched, like binary stars locking each other in orbit. The dragon charred her legs, but Ammuya channeled her pain. Rage became strength. She could never forget her other children, murdered by this one. She ignited with grief. Her light blinded the monster; her spray disintegrated its limbs. The dragon’s howl shook the galaxy. With its last strength, it curled inward to heal itself, a motionless ouroboros.

Ammuya saw her chance. She could strike and slay the monster forever—avenging her other children. Yet she circled through space, watching him heal. He looked like he was sleeping. Like he had before he murdered the gods. She could not strike her sleeping child, yet uncounted creatures would die if she failed. She steeled herself; no one else could destroy him.

But now: too late. The dragon collapsed like a dying star. Lightning crackled from its shattered scales, and blue feathers sprouted through the gaps. It resurrected into an electric phoenix with wings of light. It siphoned matter from the nearest system, obliterating a trillion species. Thirty potentially spacefaring civilizations were wiped out like simple algae.

Cursing her weakness, Ammuya transformed to a sleek otter-hawk and fled. The monster chased her through a dusty nebula, its claws swiping her feet. It chased her past a red giant swallowing its own system. It chased her through the war-torn galaxy, its populated planets vibrating with passing terror. Her child gained power as he digested his siblings. She could not face his nightmare strength.

She took refuge in a quantum black hole—where he might look for her or not, and neither state mattered. She became a salamander cat. Licking her wounds, she regrew her limbs until they trailed behind her like stardust. She grew seventeen eyes, one for each of the galaxies’ gifts, and wondered what to do. She could not let her child destroy the universe. Yet she pitied him, monster that he’d become.

Ammuya curled inside herself, meditating for the thirty seconds she needed to analyze the situation. In her resting state, she called upon universal wisdom. She radiated to the people of this galaxy, who proved numerous and unaware of each other. She fluctuated with the colors of HELP, and slowly their lives fortified her, strengthening her powers. As always, some beings worshipped her, and some chose her child. She grew forcefully, devouring suns where life had once existed but gone.

All this knowledge—yet she saw no option but killing her child. Ammuya cried. Her tears flowed through space, then faded to dust. Vacuum overwhelmed even a goddess’s tears.

Ammuya gathered her strength. From ten dying stars, she took their cores, renewing her immortality. From thirteen pulsars, she took regularities and eccentricities, to make her tactics reliable yet unpredictable. And from the nearest quasar, she took hot flame. She crafted a burning lasso to help capture her child.

The people’s prayers were what she most needed—their belief and their support. Their power was not a force of physics like gravity or energy. Physical forces allowed her actions; belief allowed her existence. Her strength depended on the millions of sentient species in the universe.

Next Ammuya built her shields; she pulled the event horizons from a black hole and pressed it into a sphere: a jet-black shield should her child discover her. Her poor child, who had distorted inside his prison. She blamed herself—that millennium she’d spent singing him lullabies in a lifeless galaxy. Where he slept, after he’d devoured sixteen worlds and an intelligent population of trillions.

He’d been born this way, somehow. His birth had been different; she stayed linked to him in a way she had not with her others. When he burst from her, all her anger drained into him. That made him what he was. A monster, a weapon of pure hatred—a galaxy-breaker. That was why she failed to strike: He had stolen her power.

At his birth, she’d seen no option; he had to be controlled. Yet she had never wished his torture. She could not stop her children once they had captured the monster. Their torments only strengthened his evil. Ammuya grieved for her children, her five hundred beautiful creatures and all their accomplishments. She grieved for her monster, who had never known anything else, who never had the chance to be better. She loved her monster, but his crimes were unbearable. He would destroy the universe—including himself—unless she stopped him.

She landed on a barren red planet to gather her strength. She deployed her black shield around its exosphere and meditated while her powers grew. Trillions prayed to her under billions of names. She drew their thoughts into her core and brightened like a newborn star.

The monster came unexpectedly, long before she could brace herself. Still a phoenix, he tore through the shield like it was stardust. He clawed her neck. She shrieked as her blood stained across light-years. Ammuya lassoed him with starfire, but he shrugged the coils off. He laughed at her attempt.

She darted away, taking refuge between atoms in a distant asteroid belt. She cried out with a voice so strong it rearranged the surrounding rocks. My child, my beloved, please cease. We are the only two left.

He hissed through the void, then took shape as a sulfuric cloud. He dissolved a thousand asteroids. His supporters prayed; they made war on their worlds, destroying all creation. Their hateful prayers expanded him, exciting his molecules towards further chaos. He spoke like a supernova. I will never forgive.

Her guilt overwhelmed her; she had no innocence here. She had not saved him from his siblings. But she must try reason. Let us work together. Let us rebuild.

He broke the atomic bonds where she hid. The asteroids exploded. He chased and she fled again, her heart heavy with what they’d done. Four thousand solar systems died that day, vaporized in their wake. Ten trillion voices cried out their deaths and vanished. The loss wrecked Ammuya’s heart. But when she finally escaped into the heart of a neutron star, she grieved more for her child, whom she’d birthed and nurtured. Her monster, whom she loved.

The star protected her while she wept. Her tears seeded life on a million new planets. Over time these tears would evolve, each to their own dead end—as bacteria exposed to radiation, or as advanced life forms that poisoned their planet. There was no telling which seeds would sprout or how long they would last, but they were born of her misery and destined to tragedy.

When she had grieved long enough to regain control, she had no solution. Her shields could not withstand the monster; her useless lasso was destroyed. She had only one desperate idea.

She made a new shield. Instead of black-hole negation, she crafted with bright starlight. She persuaded the light to align itself; she taught each uncertain quark where it was and how fast it was moving. Her shield became a shining raiment befitting the queen of the universe. Ammuya transformed to a mother eagle-kin with golden wings like an angel. She clad herself in the translucent garb, which shaped to her body, and hid it with starry armor.

But the garb was a distraction. She built her deepest shield with a thought. Then she called out. My child. Come to me.

The expanding edges of the universe paused with her plea. The monster heard, as she knew he would. He charged from three galaxies away, through their ravaged stars and planetary debris. A serpent now, his simplest form—a mouth to devour all things.

Ammuya shone from within her neutron star. She called to the monster, radiating her words through the electromagnetic spectrum. My child, I failed you.

He reared to strike. His scales emitted gamma rays; his presence decayed all things. When he unhinged his jaw, his mouth spewed the wreckage of planets. Ammuya held up one talon to draw his attention. She said, I give myself to you.

Her armor fell like meteorites. Light dispersed into the vacuum. She, the monster’s mother, stood nearly naked before him.

The monster bit her unprotected face. Poison raced through her body. Ammuya shrieked and crumpled; her scream altered evolution on a thousand nearby planets. The monster shredded her wings, scattering her into photons. With a howl, he reached her true shield: the one she had built to destroy them both.

She said, I love you.

She flared like a supernova. Her shield ignited; a shield he could never shatter. She transformed his power and amplified back at him. She immersed him in love. He could not stop it; he could not reject nor defy it.

With an injured howl, he spasmed into blackness. He writhed, rending the galaxy into antimatter; he chain-reacted until he could explode no more. He transformed into an ever-shifting fractal being, composed of every intelligence in the galaxy. He could not see himself without seeing his mother; he could not harm anyone without being loved.

He wept for his crimes, for his siblings, for his dying mother.

I am sorry, he said plainly. I could not understand.

I know, she said, because we are the same. I am a monster, too. We are both divine monsters.

What happens now? he asked. I cannot help but love what I see. How do I keep it from hurting me?

Ammuya had little time before her rupture. She shrank into herself, deleting her particles until nothing remained. It will always hurt, she replied.

He shimmered his confusion. I am wiser now. How do I atone?

Love them, she said, echoing with starlight.

His frequencies harmonized with hers. She superimposed herself with her child in a quantum state. For a moment they occupied two places at once, yet remained the same being. As they had always been—as all existence is one.

She collapsed and died. With a bang, she gave her child a new universe. 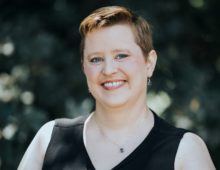 Vylar Kaftan won a Nebula for her alternate history novella “The Weight of the Sunrise.” Her new novella “Her Silhouette, Drawn in Water” is forthcoming from Tor Books in 2019. She’s published about 40 short stories in Asimov’s, Clarkesworld, and other places. Her Nebula-nominated story, “I’m Alive, I Love You, I’ll See You in Reno” launched Lightspeed.