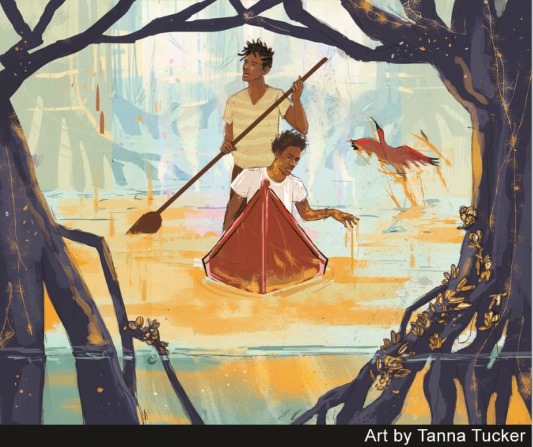 Remember when I first see it while boating through the mangroves in Caroni Swamp. Was early morning—you coulda still see the flicker of a candlefly here and there. I was following a trail of dead tilapia floating belly-up in the water. Wasn’t the first time I see something like that—but not to this extent. Their lifeless bodies was washing up on the silt. Black halos of corbeaux circling overhead, like angels of death. Wasn’t the tilapia alone. Fiddler crabs, by the score, was piling up themselves in a corpse slagheap. When I stop to take a closer look at them, I notice these bands of gold on their carapaces—faded and speckled. Next to them was a scarlet ibis, still alive, kicking a spasm out of its leg, wings shuddering in the moist cold. I tiptoe closer to an ibis corpse, my boots crunching foliage with each step, and prod its wing with a twig. The underside of the feathers—a dried crackle of gold.

Then my eyes turn to the mangrove roots. The oysters clinging onto them like yellow cysts, polished with an oil-filmed shimmer. The gold hue even start to splinter through the root bark. But then it catch my eye. The gold was leaking through this thick cluster of mangrove. The damn thing was bleeding, murkying up the lime-green water. I stand up straight, throat gone dry. Never seen nothing like that before. Wanted to scramble my ass back on that boat and row all the way home. But spirits whispering to me—Balgobin, boy, you hadda see this. You hadda come closer. So, I went closer. In my mind, I step outside my body; an invisible spectre drifting towards the golden water.

But I stop myself. I had to call Yadav to see this. So when Yadav and me come back to the spot, we come prepared, camera and all. We didn’t really know what to expect. To be honest, I thought we was gon find something similar to what happen in Brazil a few years back—where the Rio Doce was running red after a dam collapse and spill iron into her veins. Didn’t have nothing like no oil rig or ore mine set up shop anywhere near Caroni Swamp, though—didn’t matter. We just wanted to be the first to see. At least, we coulda claim that.

The water was shallow enough to wade round near the mangroves. We take a cutlass and chop a path through where the gold fluid was seeping out. The colour got deeper and deeper. I coulda see where it was coming from. I squint my eyes and bam!—a frantic fish hawk nearly knock me over. I swing my blade at it and damn near cut Yadav’s head clean off. He cussed me for five minutes straight. Wasn’t only the fish hawk was acting up, though. The herons was going mad, hopping and zipping from bough to bough, crashing into each other, colliding into the mangroves. Bubbles form where the golden pool began, surrounded by groupers, snook, catfish—all belly-up, some of them completely coated in gold. A tree boa looked down at the pool, its body looped round itself in a double-knot. Probably the only animal not joining in the cacophony.

Yadav, who was almost as loud as the birds, dwindle into silence when he laid eyes on the shimmering pool. My chest tensed up and tickled, like there was a humming in it. The pool was an unnatural gold—unnatural to the swamp and everything round it, couldn’t even tell if it was solid or liquid. Reminded me of them glutinous algal blooms you’d see in ponds near farms. Was it a sap? Leakage from some pipe we didn’t know nothing of? Maybe some radioactive mineral? It had a slight glow. Honestly, first thing I thought about when I saw it was Hiranyagarbha from the Vedas, the golden womb that was the source of all the universe.

But this thing wasn’t sacred. I wasn’t going near it, but Yadav dip his hands—his bare hands—in it. It’s warm, he say. When he pulled his fingers out, they were gold.

Your fingers arright? I ask him.

Later in the day, the gold creep along to his palm and then his wrist. By the time morning come, it infest his entire arm. His arm wasn’t solid gold, no. It had the texture of a scab. We rush him to the hospital, but nobody know what to do except drown him in sedatives. They call a man, who then call a next man—and before we know it, had a team of university researchers and scientists standing over Yadav’s cot, fingers to lips, silently observing the golden scab as it spread to his collar. Before nightfall, it engulfed his neck and he was dead. The doc say that it collapse the cartilage in his windpipe.

Two months later, three white men fly down here to Trinidad, asking me to see the pool. They tell me that they’s from an American TV show—Paranormalists or something like that. I ain’t gone back to the pool since the time with Yadav, and sure as shit ain’t want to now. But the money they’s offering—shit, that is white people money. Lemme tell you, you ain’t never gon see a check like that selling oysters and mixing ketchup and culantro!

So, we on the boat and they already filming on and off. Scott, the host, doesn’t like the name Balgobin. So he callin me Gobi instead. Before the camera comes on, he ask me, “What do you people call this thing?”

I say, “We call it Hiranyagarbha from—”

“No. No, no, no.” He shakes his head. “Too many syllables. Too ethnic. This isn’t National Geographic, buddy. Come up with something catchy.”

“Golden Pond?” Scott twists his mouth. “Is this a fucking joke? Are we making a Katherine Hepburn movie?”

“Fuck it,” Scott says. “Jones, use that noggin of yours.”

“Midas Creek,” Jones, one of the cameramen, says.

When we finally reach the clump of mangrove where the gold spills out, they rev up the cameras again. Scott says, “Gobi, tell us about your friend’s mysterious death. You were there when everything went down, weren’t you?”

When he puts the mic to my mouth, I hesitate and stutter. Scott motions for Jones to stop. He then says, “Just tell the audience nice and clean. We’ll do details later with a VO.”

When we come up to the pool, I notice that it has expanded. Not by much, but it has spread. I feel sick—that humming, tickling feeling in my chest was back, like the first time I visited. Scott and his men is too busy capturing footage. We could see the pool. The coppice surroundin it is petrified gold. We stop just where the gold stops. “What the hell is that thing?” Jones asks me.

“I think we’ve found ourselves a gold mine, gentlemen,” Scott says.

We go back to the boat and Jones uploads the footage to the laptop. He plays some of the footage back and points out something strange to the other cameraman. “What do you see?” Scott asks.

“A strange frequency,” Jones says, as he shows us a shallow oscillation on a graph as the video plays. “25Hz.”

“That’s the vibration that was in my chest?” the other camerman asks.

“An extraterrestrial frequency, Jones?” Scott asks, his grin widening. “Do we have an alien crash-landing here in the Caribbean? Give it to me, baby!”

Scott cuts in, “I can see it now. Our episode title: The Tropical Swamp Thing: Exposed! What do you think?”

Jones shrugs and Scott’s grin quickly fades. “You’re right. We’ll be up to our asses with copyright infringements.” So, the golden pool ain’t enough? I want to say. Your viewers ain’t care bout Yadav’s death? You need a cheap-ass Hollywood monster to go with it too?

And I just blurt out, “This fuckin thing is probably going to engulf the world one day, give it a couple hundred years!”

The men all turn to me, the boat bobbing in the marsh, the slow tickling still in our chests. “Gobi! That’s rad, baby!” Scott yells out. “We’ll roll with that, yeah. That’s some fucking terrifying shit there.” At the same time, a scarlet ibis zooms above us and crashes right dead into a mangrove tree, hitting the water.

“Jesus,” Jones mutters as he looked at the ibis’ dead body floating in the water, at the mouth of the mangrove clump.

Jesus can’t save we now, I think. This ain’t the world ending. No. This is the world’s scripted rebirth. Hiranyagarbha. And the golden womb is here in Trinidad—in a cluster of mangroves in Caroni Swamp. Kevin Jared Hosein currently resides in Trinidad and Tobago and is the Caribbean regional winner of the 2015 Commonwealth Short Story Prize. His first book, Littletown Secrets, was published in 2013. In addition to having fiction published in Moko Caribbean Arts and Letters, his work has been featured in anthologies such as Pepperpot; New Worlds, Old Ways: Speculative Tales from the Caribbean; Jewels of the Caribbean; and the Akashic Books series, Mondays are Murder and Duppy Thursdays. He has also been shortlisted twice for the Small Axe Prize for Prose. His novel, The Repenters, is being published by Peepal Tree Press in July 2016.