Published in May 2020 (Issue 120) | 1796 words
© 2015 by Carmen Maria Machado. Originally published in Lady Churchill’s Rosebud Wristlet. Reprinted by permission of the author.

Here is what you do when you need to choose the end.

First, find a person who knows your body, and fuck them for three days.

Then, drive to a meadow, where there is so much life.

There, dig a hole long enough and wide enough for your body to fit.

The first thing I stop feeling is my fake tooth, the one mounted on a screw that is threaded deep into my jaw. I have been aware of it, day and night, ever since the novocaine wore off during a summer afternoon when I was seventeen. The day was hot and bright and long and then it was hot and bright and long and there was something else inside of my body. I could feel it, an alien presence; something hunkered down in my mouth. Now, it blinks out, as if it never was.

The sun leaves the patch of sky visible to me, and when the shadows above lengthen they dip down into my grave, distorted on the walls of clay.

My heart has stilled, a new kind of quiet.

My body is no river, but as it if were a river, my fluids sink like silt. Gravity crawls on top of me, into me, and weighs them down.

My limbs are stiff, like on the days after an unexpected sprint.

As for the creatures, the beasts, the living things? I hear them coming.

Now, inside of me, life again; though smaller than what was there before, legion: blowflies and maggots the size of pencil erasers, all of them working, working. They push up and out and I swell like I am full of want or food or both, and I wonder if afterwards things will grow out of me and my soil, saplings perhaps, who with age will become trees with fruit-bearing branches, the kind of red, red fruit children eat when they’ve gone exploring, and from that slip of life more life will come, more trees and things that can grow beneath the shade of their canopies, and rain will fall, new rivers will cut through the earth because there is nothing more powerful than water and time, and the river will rise and fall and rise and fall with every storm and every summer drought, and from me will come a whole, new forest, and the center of it will be my body long dead, but because I have fed that tree, I have fed everything, and I am the forest’s mother, I am her father, I am her god and goddess, her primordial soup, her progenitor, her big bang, the forehead from which she has sprung, and if a brave young woman were to cut through the forest to its deepest and most tangled interior, on a mission to find a mythical flower that will cure her lover of a mysterious illness, a witch would certainly tell her about me, and send her the center of the growth to find the origin, the source, the holy seed, the bloody uterus of the known world, which is to say, the forest, which is to say, this forest, and she would find the tree above my bones and nap there and dream and know that before her lover grew ill, and before they had touched even once, and before she was born and before the forest spread and before this tree grew and weighed down its branches with red, red fruit, my body was in this grave in the earth, still slick with spent desire, dead, and pregnant with the gases of a thousand nursing organisms, and that I heard the rustle of birds and little creatures tunneling through sandy soil, and once a deer looked down into the grave, right at me, its sharp shovel skull tilted sideways, my face reflected in its inky pupils.

I am deep in the woods and there is no returning home.

Here is what falls away:

A history: When I was seven, I couldn’t stop swallowing dirt. And grass, soil, stones, fallen leaves, leaves plucked from branches, branches broken into bites, bark, snails. It gave me powers. It made me immune to the invisible monsters of the world, the kind that traveled to you by innocuous methods: on the fingers of friends, a shared cup, an oyster of saliva dropped into your mouth by a neighborhood bully. Better the germ you know than the germ you don’t.

Fears, all of them: Brain tumors, blood clots, choking while alone, slipping and impaling myself on some otherwise ordinary object, tripping and breaking my neck, that amoeba that eats your brain, auto-immune disorders, being struck by a stray bullet, the exponentially growing catalogue of cancers, blood poisoning, rabies, mad cow disease, quicksand, ticks and their many diseases, allergic reactions, being cut so deep you can see the color of your insides, flesh-eating bacteria, bird flu. That one day you will be taken by one of these things, and you will be buried—all of this in the passive voice.

An image: A salmon slit at her gut, pink eggs pouring out of her like beads.

A sensation: My mouth filled with tapioca balls, teeth mired in the sleek stick of them.

A sound: My father kept my milk teeth in a box that he’d rattle when I was sad. It made me smile, a gum-gapped smile, that clatter of wood and bone.

A memory: I was a girl once, and my father and I hiked to a summit. He wanted show me nature, tell me stories, pass on some campfire songs, but I couldn’t help but stare at the sheer drops to the valley below and worry about my body pinballing down the mountainside until it was broken, dragged away by wild things. In my mind, I walked off the ledge of stone and pedaled in the air for minutes, like a cartoon character, until I thought to look down into a yawning abyss below me.

A confession: I am afraid of what lies at the bottom of the valley.

A confession: I cannot remember not being afraid.

A story: There is a story of a boy who wished to die, and so he sought out poison to drink. But what he imbibed were sweet things, unfamiliar to him in his sorrow: honey and wine. He staggered to a freshly dug grave and laid himself inside, waiting for the end. He mistook the heady slur of alcohol for oncoming death. He misheard a local wedding’s church bells for the sounds of paradise. And he died there, of exposure. He did not follow my advice to the letter, and died afraid.

A hand: A bird descends, then lifts with her prize.

The rest: All the things that do not serve me.

They fall away and become part of the earth. They’re her troubles, now.

I am roiling, frenzied, lightened. Nature abhors a vacuum, and so my fear is replaced by nothingness is replaced by life, life, life. My body gives birth to a million others, more useful than ever. It churns like rapids. It swallows and belches and muscles like a living throat. It evaporates. It is rinsed away by itself. It is a sink filled with coffee grounds; a hand circling water around steel until it’s all washed down. My skin slips from its perch like a silk blouse.

I tumble off into oblivion, the rapture of the deep.

The exhaustion of an all-night dance marathon. The body is heavy, but exhilarated. It is rocking, bouncing, fighting sleep. It moves just enough to avoid disqualification. The judges are watching. They’re tapping their pencils on the table and looking at their watches. A glance passes between them.

The body walks home. The pre-dawn sky is marbled, the moon a slit of stone. The air is supple, new, just warm enough. Promise pollinates everything, and smells like wet grass.

The body will age. The body will swap the faint elation of possibility for the white-hot scorch of terror. It will not mean to, but it will: deep, physical fear, muscle-locking anxiety that obliterates all happiness. Don’t you understand that the line between being alive and being literally nothing is so fine you could cross it with a half-step in front of a subway train?, the body tells anyone who will listen. The body will occupy ERs, doctors’ offices, therapists’ armchairs, friend’s couches, all because the body is sure death is close. The body explains that none of this—the body sweeps its arm to demonstrate friends, family, lovers, Klimt paintings, hot bowls of pork broth ramen, stark winter landscapes, the sucking vacuum of grief, karaoke, navigating the New York subway, watching a coyote stalk a rabbit, ghost stories told by strangers, holding someone’s sister’s baby and cooing at it until it pukes down its onesie, dirty martinis, the slip-and-tumble of the first fuck with a new person, being so cold the face hurts, a novel that breaks open the mind, driving fast with the top down, a summer thunderstorm advancing across the sky, the warm bath of the Florida ocean, feeling beautiful, stubbing a toe on a table leg, all of the things that are the cumulative experience of its existence—none of this will matter when the body is in the ground. The more it lives, the more is lost when death finally comes.

The body is not very old when it decides to become more than a body—to become a dense, collapsing mass, to become soil, a sapling, a forest, to give something back—but it feels like it has lived a thousand years. The body learns that it is the inheritor of any number of broken genes and shattered DNA and that the body is even weaker than the body had previously anticipated. This is it, the body decides. Time to get off.

Even maggots leave bodies, in the end. They have better places to be.

It waits. It does not—

Thoughts are not its strong suit.

A clock ticks. Not a clock. But a clock.

Bones bleach the earth, and ferns lace the bones. 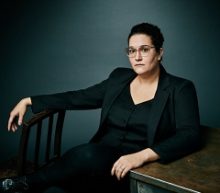