It Begins to Snow

When it begins to snow, it never stops.

Perhaps not for you, but another iteration of you—a manifestation of your wild possibilities. I hope it’s not you, for my sake. When it begins to snow, the sky comes down in sharp, precise fragments, and you press your forehead against the window and think: don’t ever stop.

I don’t want it to be you, because when it begins to snow, the world ends.

There was a song we sang together as children, spinning until we collapsed dizzy and laughing—do you remember? We sang, and spun, our hands clasped until one let go and we were flung apart.

You just keep saying “ever” until someone lets go. You don’t remember? Perhaps it isn’t you, and I’m safe. Maybe the world will go back to the way it was before winter.

Or perhaps it was our children, spinning in the snow, stumbling home damp and cloudless, throwing their coats everywhere.

The snow smothers the garden we planted together and washes up the sides of the house. We argue over whether it’s acceptable to exit through the upstairs bedroom windows. I remind you that I didn’t excavate a large tunnel from our front door for my own amusement. If we’re going to survive this, we have to have some rules. We have to assert a measure of normalcy for the kids.

You laugh. “Normalcy,” you say.

The kids are listening, so we reassemble their coats and push them out the second floor window to play, then you and I spin and spin until we’re flung apart, dizzy and miserable.

I can tell you this right now: it never stops. Never ever. It’s the end of the world.

The drifts close over the peaked roof. All the windows go dark, and cold flakes sift down the chimney. Every morning, I excavate the end of our tunnel, pushing aside the new snowfall and rounding out the edges, showing pride in my useless craftsmanship.

I emerge into the bleak, muffled morning. Tree tops poke naked fingers out of the drifts. Some days, I see our neighbors outside. We lean on our shovels and hold our sore backs, looking into the withering sky together until the flakes sting our eyes. It’s the end of the world.

One by one they fail to appear. Their tunnels seal up, and I lose track of where their houses once stood.

I leave every day to go foraging. I find things in the snow, speckled with a few stray flakes as if they just fell from the sky. I keep a list, because it’s important to maintain a sense of purpose:

A hairbrush with a few strands of a stranger’s hair caught in the bristles.

A tin of sardines, the one food you always insisted was unworthy of love.

A can of beer, which I would not let the kids taste. You poured a tiny amount into their juice glasses. “What difference does it make?” you asked. They made faces and laughed in the stifling dark.

A pair of shoes, left side by side, their owner barefoot or raptured away.

A frozen deer with ice-clouded eyes, as if ambushed by its fate.

One day, I stay out too long foraging, and lose track of my own footsteps. I wander in mounting terror across the hopeless landscape, wondering if my home is directly under me, until I fall miraculously into the tunnel.

I stumble weeping down the slope to the cold door. It’s dark inside, and quiet, not warm but comfortingly humid, and it smells like the kids and peanut butter and the newspapers we burned before the chimney closed up. I sit in the ruin of my soggy clothes and cry. When you see me in the dim tunnel-light, you don’t draw near. There’s no such thing as good news between us now. There’s no comfort to give or receive. You watch me smear furiously at my tears, and you stand back, the way you might if I threw gasoline over myself.

After that, I cut myself open a little whenever I leave. I cut just deep enough to leave a bright red trail behind me, hard enough that the pain keeps me awake through the endless cold.

You told me before the snow began that you were losing your hair. You said each strand was like one happy day we once shared.

I cleaned out the drain in the shower and said everything was fine. It was just winter. It wouldn’t last forever.

Some time later, it began to snow, and you woke up from a distant sleep and wished it would never stop.

I wander the blurred white, bleeding out my memory of a time when we spun and danced and laughed as we fell apart.

One day, I grow so cold that the cut goes numb. I look back at the blowing snow and find no red pathway home.

My footsteps are already filling up. Before long, they’ve been obliterated. All trace of my presence here has vanished. I walk, and I walk, but I’ve lost you.

I’d hoped it wasn’t you. I imagined it was another iteration who leaned against the cold glass and invited the freezing certainty of winter, willing to see it all end before living another day of the warm and wasted time that went before.

Then the snow stops falling.

This is how it is at the end of the world: it snows, and snows, and never stops. Until the day it does.

Light shines down the tunnel and summons you to the surface. The world is quiet and patient. Your voice rings in the clear air, calling the kids into the sun.

Out in the snow is a pair of mismatched shoes and a beer can, empty. A hairbrush with a few useless hairs. A can of sardines, unworthy of love.

A deer watches from the distance, ragged and curious, in the crease between the blank world and the hard blue sky. 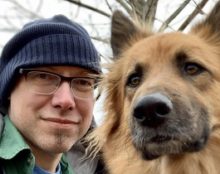 Adam R. Shannon is a career firefighter/paramedic, speculative fiction writer, aspiring cook, and steadfast companion of dogs. His work has appeared in magazines and anthologies including Nightmare, Apex, Beneath Ceaseless Skies, and Glitter + Ashes: Queer Tales of a World That Wouldn’t Die. His story “On the Day You Spend Forever With Your Dog” was a finalist for the Sturgeon Award and appeared in The Best American Science Fiction and Fantasy 2019. He’s a graduate of Clarion West 2017.